Back on a Hill

Turned out that Marion was off on Saturday (yesterday) so I just decided to get organised and go. I didn't want to spend too much time working out a fancy destination, so Sgor na h-Ulaidh
seemed a reasonable choice. I knew where the car park was, it wasn't too far away, and the forecast was fair enough.
I got a reasonably early start, although I had a couple of second thoughts just after I got into the car. Second thoughts along the lines of "I can't be ersed driving to Glencoe on my own...should I just take the dogs up the Campsies...have they started shooting deer yet, and is that glen a hotbed of stalking". All the usual stuff. However I decided to press on and got to the wee carpark at about 10:15. Traffic wasn't too bad. I had elected to go via Loch Lomond just for a change.
Walking by half past. I met a chap coming the other way, with a dug. Marvellously interesting man. We had a wee chat - he's a former scientist and professional photographer, and him and his wife have a lease on one of the houses just at the start of the Glen. The landlord is the same chap that owns the great Glen cattle ranch, and also has several thousand acres at Ardnamurchan, so that sort of info is always useful to have when wandering the hills. We set the world to rights - I was genuinely surprised when I looked at my watch and realised we'd been gabbing away for 45 minutes. Remarkable. Anyway - nice to meet you, Bill.
:0]
You can't go wrong on the path to begin with. Friendly signs, and it leads you gently up the Glen. I'm glad I turned round at one point, because there's a decent view of the Aonach Eagach. 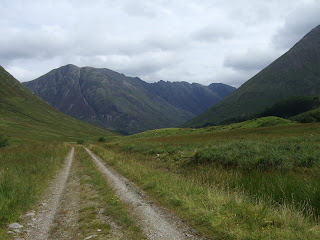 The track curves after the last stand of trees, and it was at that point I decided I was as well to strike up towards the skyline on my left. I really didn't fancy heading up the prow of the outlying ridge like the Munro book suggests, because it looked not only prohibitively steep, but unpleasantly craggy.
As it turned out, I'd probably have been better following the track right to the end, because once I got up a wee bit of height it was clear that there was a col further along that was a good deal lower than the point I was aiming for. It wasn't even as if you could traverse diagonally, if you see what I mean, because there was a big trench/gully thing that would have involved a fair descent and reascent.
It was seriously hard going on steep grassy slopes, and the fact that I haven't been out on a hill for weeks was making a real difference to my progress. I felt like I was having to stop about every 50 yards. Probably because I was stopping every 50 yards. At one point I looked at the summit and thought "maybe another hour, or just over." Suffice to say it took me two and a half more hours to get there.
Once onto the ridge it got easier of course, but there is the top of Stob an Fhuarain that you have to go over before you can start the climb to the Munro itself... 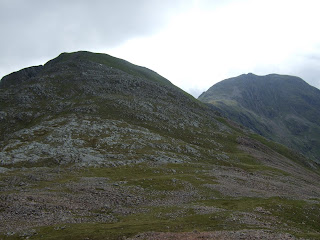 Cramp was noticeable, shall we say. At one stop, which was entirely random and not anywhere near a normal resting point, I noticed a watch lying on the ground. The strap had broken. it was a cheapy Timex expedition model. Green. Exactly the same as the one I had on. Spooky, eh?

In any event, I took it easy, had plenty snacks, and was pleased when I realised the higher up I got that the last ascent didn't look as steep/ dodgy as it had earlier, so I made it. Wee bit just before the summit that was reminiscent of Kevin's bad step on the Ballachullish horseshoe, but I just moved slightly to the left and clambered. Good views of said horseshoe, as it happens.

I decided to go down the same way, as McNeish says the descent route if you continue on past the summit is very steep, and I didn't want to be picking my way through craggy drops, particularly when I was so weary. Right decision I think. The return was steep and rocky enough.
The whole thing took 6 hours. I think I should have been able to do it in closer to five, to be honest.
Don't know that I'll be hurrying back to find out, mind you!
Still, I was really pleased I decided to have a go. It was close to a refusal at the first fence.
:0)