It's been a bit hectic at work over the last few weeks, so based largely on the good weather forecast I decided to take the day off on Friday to get up a hill. It goes without saying that it's always easier to get a day off at short notice when the guy in charge of the holiday arrangements is coming with you.

The clock change meant that me & Andy thought a long walk, even after a fair drive, was now in order and after a few suggestions (including a repeat of the Loch Quoich daytrip, this time to do Gairich!) we settled on an attempt at Braeriach, from the Aviemore end, starting out at the Sugar Bowl carpark.

(Incidentally, I hope the fecker that was spending the weekend in his motorhome in the carpark, to avoid blowing a couple of bucks at a proper site, and whose smelly, rattly auld generator spoiled the atmosphere at both the start and the end of the walk gets pish weather for the rest of his stay.)

In the event the forecast was right. The sun was splitting the trees.

We followed the route set out in McNeish's Munros book. The estimate there is eight to ten hours. It took us eight & a half, so I was quite happy with that, given that (a) we were enjoying the sunshine, (b) we had to take our time getting the dugs through the Chalamain Gap, and (c) we spent a good 15 minutes on Sron na Lairige just staring at two wee figures going up what seemed to be an impossibly steep, icy slope of death on the final climb to Braeriach's summit, debating to ourselves whether they were all ice-axed and cramponed up. Because we had neither.

It turned out fine. The gradient was nowhere near as steep as it looked from a distance and the snow was soft and perfectly forgiving. In fact, one well-organised chap had passed us on skis a wee while earlier and his trail could be seen on the hillside as well.

Highlights? Well the weather, obviously, although there was still a bitterly cold wind on the summit. The views? That's a bit odd. When me & Gordy were out in the Cairngorms last time we got some rather good photies of the hills; Braeriach and Cairn Toul in particular. From Braeriach it's a slightly different matter. The whole panorama is magnificent of course, but apart from Lurcher's Crag which is directly opposite on the way up (across the Lairig Ghru) it's not really a location that brings you outstanding views of any hill in particular. A bigger camera might help, mind you. Everything in the Cairngorms looks so far away with mine.
;0)

Lowpoints? The Chalamain Gap was very little fun for the dogs. We had two of Andy's, Maura & Cara. (I'd left Jorja at home because Marion was only working a half day. Oh, and also because the Wee Black Dug doesn't understand the whole cornice concept - especially when she's chasing the local wild life. As it turned out that was a good move, because personally I think I got a couple of reasonable photies of delicately poised cornices.)

Regarding the Gap, the dugs weren't that keen on the whole "boulder field with labrador-sized spaces between the uneven rocks" on the way up. Six hours walking later, when they were puggled, they really baulked at going through it for a second time. Much cajoling, pushing and indeed rather precariously-balanced lifting was required on the return journey. I think you might be able to bypass the Gap by climbing over Creag a Chalamain on the way back but by that stage the thought of any more ascent was not a tempting one for me or Andy. That's maybe the other drawback to this route - there feels like an awful lot of "up" on the way down.

Still, that's hillwalking for you.
:0)

One point about the route. On the OS map, the very clear path descends into the Lairig Ghru, and appears to lead you across the burn - called the Allt Druidh, I think. It's a pretty wide burn, and we didn't see an obvious crossing point, but if you follow it upstream for a couple of hundred yards, it disappears altogether (or rather it simply emerges from underneath some rocks!) so you don't need to get your feet wet. I think the obvious path that you follow after that is maybe a newer one than the path shown on my map, to be honest.

Oh, and on the way back we spotted the reindeer herd in the distance, between our path and the ski centre. Sunshine, cornices and reindeer. I may have said this before, but I love Scotland.

Anyhoo, photies. I've been footering around with irfanview on some of them, and I'm beginning to faintly understand that I can resize them so that if you click on them they don't get too big. It's a work in progress though. Plus, if anyone knows the secret to an easy way of sticking a caption up for individual photos given the editing facilities on Blogger, please feel free to shout. You'll get the gist of the trip though - bridge over the Allt Mor at the start, Chalamain gap, descent to the Lairig Ghru, Lurcher's crag, cornices etc. Nae reindeer though. As I said earlier, everything in the Cairngorms is too far away! 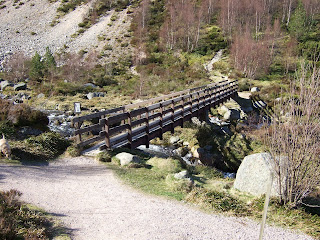 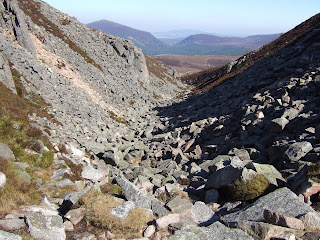 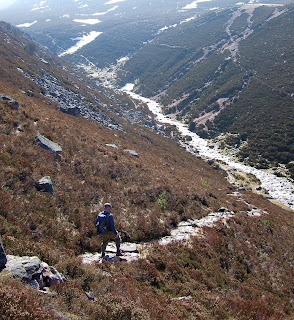 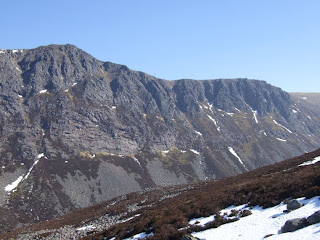 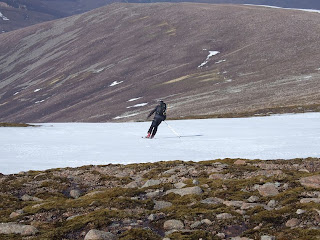 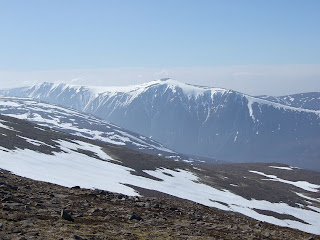 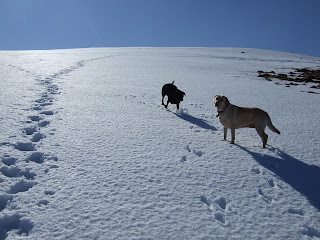 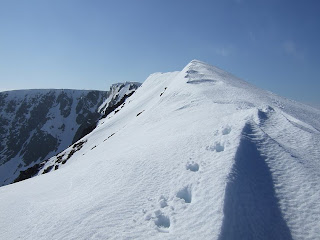 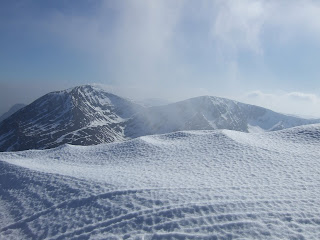 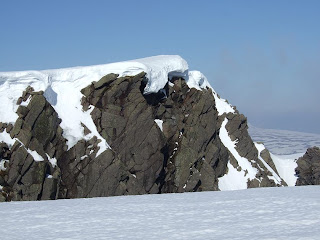 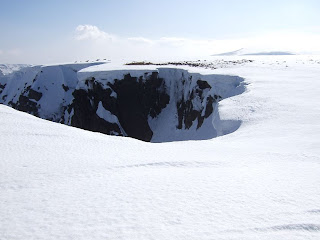 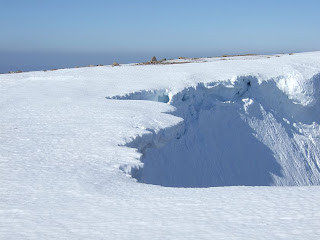