The ongoing Glen Shiel training plan required a walk that was longer than Slioch, but the amount of ascent didny really matter. I'll do the vertical training later.
:0/

The wee Cairngorms walk book by Nick Williams had a route that took in four - well, Glenshee hills I'd call them, but he has them as Braemar hills, and he's much better at this than I am, so fair enough - Munros between the ski centre and Auchallater Farm.

I'd done the hills before (the full round of 6 with Paul about two years ago, via the two car Glenshee route) but I'd enjoyed the walk into Loch Callater the last time I was there, and the weather was supposed to be good, so it seemed a reasonable walk and one that should be dug-friendly if the last visit was anything to go by.

Accordingly, me, Andy, the Wee Black Dug and - well - the Other Wee Black Dug left here about 7am and after a brief stop for supplies in Blairgowrie (Andy had perhaps had one half too many the night before, and needed a wee sandwich as a straightener) we were walking by 9:45.

It had been cold the last time we'd walked up the track. This time, the magnificence of nature in late Spring was in vivid evidence everywhere. The downside of this bounty was that there were baby rabbits, nests of fledgling grouse and all manner of other enticing dug distractions every step of the way.

Guess whether or not Jorja can resist that sort of thing.

To be fair, even Maura was off after the big mountain hare whenever they exploded under her nose from the undergrowth, but it has to be said that Jorja was the only one that actually caught & killed anything.
A terrible replay of Mount Keen, now I think about it. Maybe it's Maura's fault.
Aye, right.

The dugs were confined to the lead for a while after bunnygate, both me and Andy forming the view that once we got high enough (and judging by the steepness of the track that leads up from the loch that wouldny take long) the hare would thin out, and there'd be less ground cover for flightless birds and defenceless rabbits, and any other tasty dug targets.

Hmmm. I suspect those particular hills are unusual, because the heather grows all the way up until one reaches the rocky slopes not far from the summit of Carn an Tuirc which afford even better living conditions for mountain hare. Furry wee fast bastards.

In fairness, the hare disappeared after another 10 minutes walking.
The strain (psychologically, and in the shidders) had been beginning to tell, so it was with some relief that I leaned over to unclip Jorja's lead. Until the sight of a flock of sheep at 3000' made me reconsider. 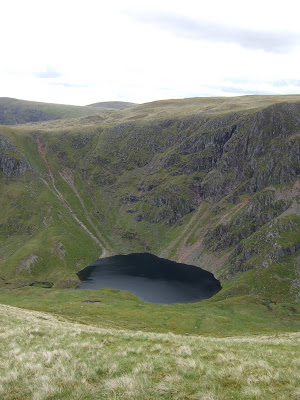 It's odd. It was a great walk, but there's no' much to say about the journey between the various summits. There's certainly the potential to break an ankle on the bouldery way to Carn an Tuirc, particularly if you're wearing Jessiehiker boots - which I was - and there's a jolly impressive drystone wall that leads you to the summit of Carn na Claise, but after that it's really just a flattish wander to Tom Buidhe and then Tolmount.

The only reason I can think of as to why both those two are Munros is that Shug met the same noisy opinionated chap that we did on the summit of Tom Buidhe, and decided that if you could put up with him, the hill counted.
I don't think I've ever been in receipt of an opening line when I've been sat by a cairn quite like "Ooh - I wouldn't wear shorts on the hill any more. My friend got bitten by a tick and got Lyme's disease."

I think the blank stare that he got led him to panic, and ask the remarkable follow up question. "So... are your dogs enjoying their day on the hill?"

The next blank stare was entirely genuine. Although I think my jaw dropped further this time around.
I couldn't even let Jorja off the lead to steal their food for a laugh, 'cos him and his "pals" were all eating bananas, energy gels and goji berries, and even the Wee Black Dug has her limits.