First news roundup item isn't one that I'm terribly proud of, but blogs aren't all about life's tremendous successes! Me & Andy bunked aff work the week before last, purely to get up a hill for a bit of exercise. What we were intending to do was get up & down Ben Nevis by the tourist path (sorry - mountain path) as fast(ish) as we could, and given the glorious weather that really shouldn't have posed any undue difficulty. 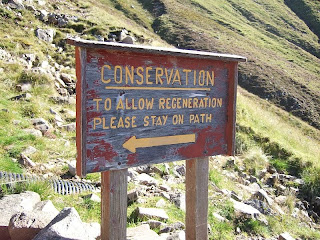 Said glorious weather however proved our undoing as it encouraged yours truly to believe (prior to clapping eyes on it) that the CMD arete wisny really that narrow, so at my behest we ignored the pony track turn at halfway lochan and headed on to Carn Mor Dearg. 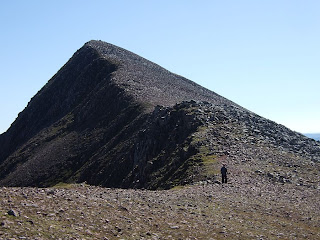 Now if truth be known although I didn't much fancy the look of the arete from the summit of CMD... 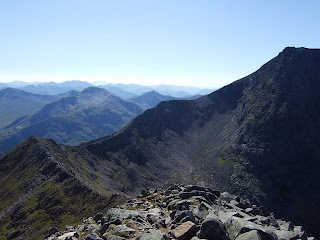 ...I was sort of OK on the first stretch of it, and was just about coping with the boulder hopping/cuddling, on and along the ridge. 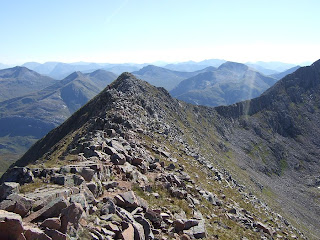 The real difficulty was that I had my eyes - and my over vivid imagination - fixed on yon bit in the distance, at the head of the glen, that looked significantly narrower. 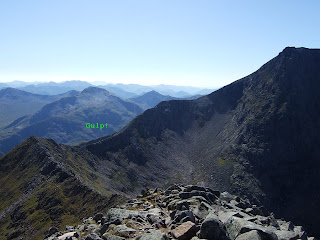 I just couldn't get an angle, or conjure up an image of quite how narrow, so self preservation kicked in and I sprachled back up towards Carn Mor Dearg. My mind was slightly taken off my embarrassment by sparing a thought for poor Andy, who'd actually done the same hill a couple of weeks earlier. Whoops.  :0/

To add insult to the red face, the rather too nice sunshine meant that all my camera settings were even less appropriate than usual so hardly any of the photies turned out right. On a positive note my legs were killing me by the end of it, so the exercise element was a success.

Ach, I'll maybe get across the thing next time. I had a refusal on Bidean nam Bian on the first visit too. Sigh.