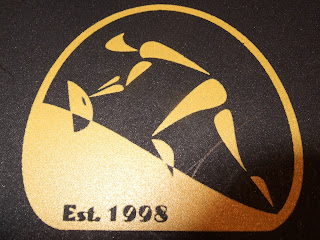 It's only fair to say that when I was out on the winter skills day, I'd taken along the snowclaw, and it actually did justify its place on the rucksack. I'd been confident enough that it would do a job even before then, but there was always the nagging doubt that it was more of a gimmick than a reliable tool. Not a bit of it.

It's the very dab for digging the test hole things for avalanche-prone slope predictions. It certainly shifts the requisite amount far quicker than the other boys were managing with their ice axe adzes. It also gives you a much better rate of progress when you're engaged in digging a bucket seat, and the combination of axe and Snowclaw would seem to cover pretty much all the potentially awkward snow relocation requirements that even the unluckiest winter Munrobagger is liable to come across.

For the sake of completeness, and in preparation for a sudden urge I've had to do the occasional semi-informative gear post on here, I can tell anyone who's stats-hungry that the pleasantly waspy coloured flexible plastic "Backcountry Snow Shovel" (Est. 1998) weighs 177grams; is about 30cm wide and pretty much the same height. The longer edge bears the legend "soft snow" and the shorter one - you're probably ahead of me here - "hard snow". Experience in Glencoe suggests that as per the instructions, the folding action, bringing the handles towards each other and thus rendering the angle (well, curve, more than angle) between the sides more acute, makes a real difference to the amount of choppy-type force you can exert on hard, icy snow.

It's a good thing. Plus, it's no' that dear, so you can justify it as part of your emergency equipment without having to try too hard.


PS: if the post hasn't conjured up any images of what a chap digging a hole with a wee plastic shield thing might look like, there's an explanatory video!!!