There are two of these, one in Glen Affric, and the one that sits in Glen Etive - or Glen Creran depending on which book you look at. We had carefully avoided the slog to the Affric one the last time we were up there, so it seemed in order to redress the balance a wee bit by having a go at its namesake last weekend.

Now, I know I've been banging on somewhat about Ralph Storer's books recently, but it's only fair to point out that - uniquely - he's quite enthusiastic about this hill, identifying as he does a rather enjoyable way to get up it. Every other site/book/blog describes a day out involving either a trudge through Glen Etive forestry, or an uneventful plod up the length of the west ridge.

"We're going to let you in on a little secret. The south side of Beinn Fhionnlaidh harbours an idyllic Lost Valley, similar to its counterpart in Glen Coe, that can be visited en route to the summit. We shouldn't really tell you about it, so please don't tell anyone else."

Ach, maybe he'll no' mind. It's all publicity, eh?

Start from the traditional car park at Elleric, and head towards Glenure House. Try not to forget your camera, or you'll need to indulge in a brisk walk back to the car. It would be churlish to to name and shame, obviously. 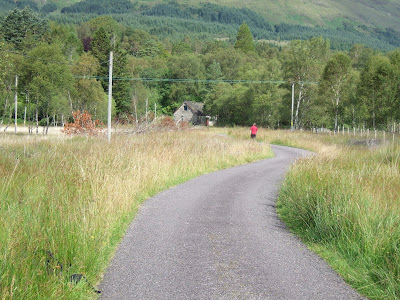 Once Gordy caught up, we followed the signs past Glenure House and then turned left on the landrover track that sits at the end of the private road. Beyond a wee bridge a grassy track appears on the right, which takes you through a patch of forest. (The good news is that I'm not actually giving away any secrets yet, because this is the way you go if you're climbing the hill by the west ridge.)

The cunning twist however is that rather than heading on up the aforesaid ridge...you don't. You just sort of head east, (down near the River Ure in our case) and then do a north eastish traverse, to follow the burn called the Allt Bealach na h-Innsig. Or "that smaller burn" as we were referring to it. You'll come across the path again (if you ever lost it in the first place) when the burn gets a bit closer to the crags on the south of Beinn Fhionnlaidh. 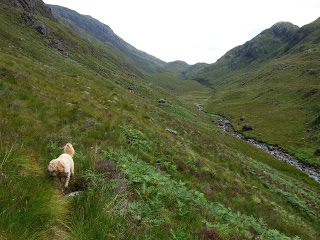 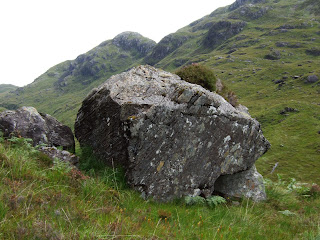 Even if you've never been in a lost valley before, you'll recognise one when you see it. Which pretty soon you will. 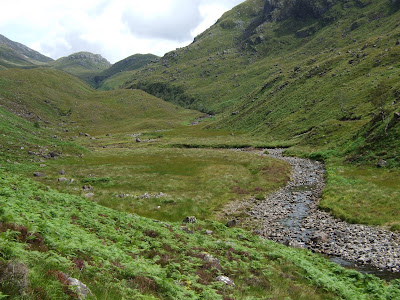 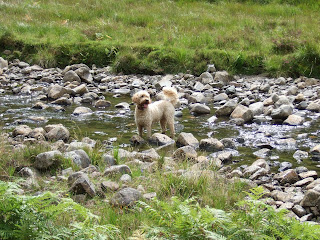 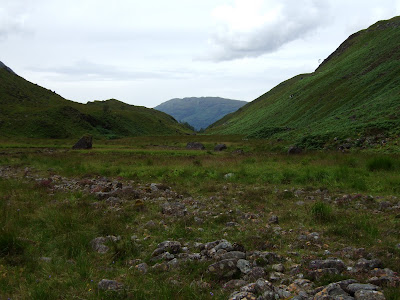 Lunch taken, a further ten minutes or so walking brings you to a hanging lochan which is picturesque from pretty much every angle. 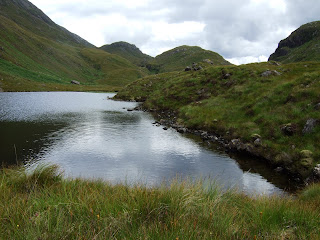 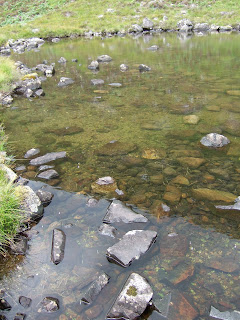 Andy reckons there's certainly brown trout at least in it, and even I could see a fish or two rising every now and then. And other stuff. 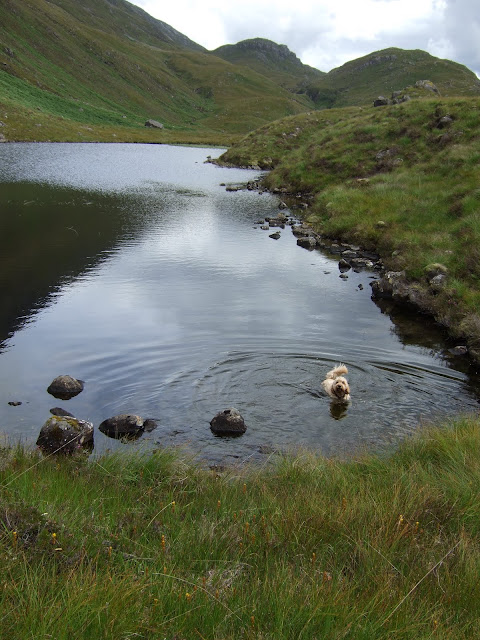 What with that, the largest congregation of butterflies I've ever seen when I've been out walking, and some bright blue common damselflies (nature notes are all courtesy of Andy, of course) there's plenty to hold the interest. The kindly weather we were having was playing its part too, mind you. 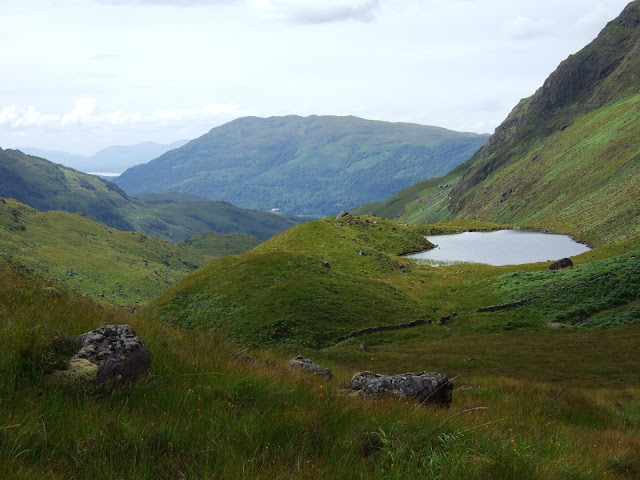 It had been a jolly entertaining wee dander thus far. There was however a nagging realisation that part of the reason it had been such good fun was that we hadn't really gained any height yet. Ralph has the onward directions from there spot on:

"Once past the last of the crags, make a steep rising traverse on grass, climbing 1000ft to the saddle at the foot of the east ridge."

It was a slow rising traverse we made, I'll give you that. 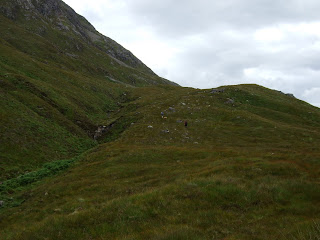 The views from the saddle are worth it though. It's an unusual vantage point for Glencoe, and all the better for it. 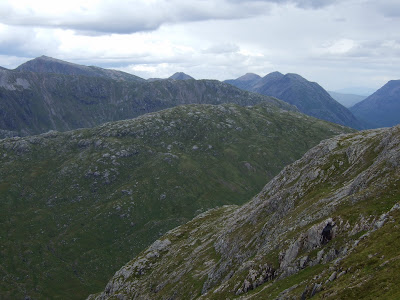 What with that vista on the north, and Starav, Cruachan et al to the south... 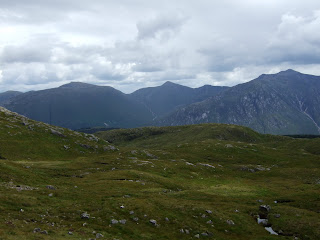 ...you're in the right place for some seriously muscly mountain action. You can even catch a glimpse of Ben Nevis a couple of minutes later, and a couple of metres higher up... 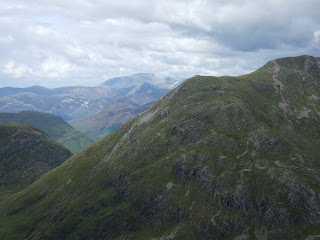 Once you've got to that point, the hill's as good as done. 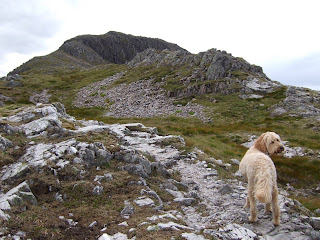 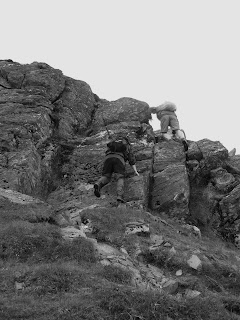 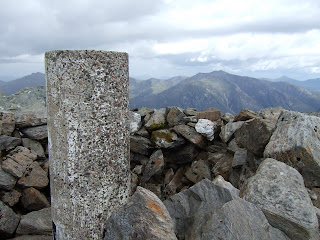 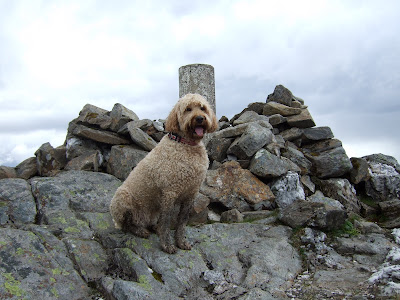 For once our timing had been impeccable, as it wasn't until then that the forecast heavy showers elected to show up.

It's never as depressing heading towards the car in the rain, if you ask me. It has to be said though that the way down the west ridge was largely pathless - slightly to my surprise bearing in mind it's one of the main ascent routes. In summary, it was grassy, boggy and slopey. (Three of the seven dwarves of Munro bagging.)

A grand day out. A highly recommended route up the hill. If I'm honest it wasn't a Munro I was particularly looking forward to given its advance press, but the Lost Valley, and the views from the saddle are genuinely memorable.

If Molly hadn't shut her eyes during the best photo opportunity of the day, it'd have been even better. 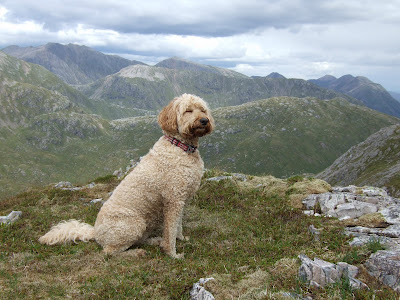