Sometimes you walk up a hill that makes a particular impression on you, for one reason or another.

When I sallied forth on Beinn Dearg several years ago I remember being very taken with the Lady March cairn. As I sallied back, much much later, I very nearly sat doon at it and had a wee cry to myself. It was, now that I think about it, much the longest daywalk I had taken on at that stage in my hillgoing endeavours.

While neither me nor Andy were on the verge of tears a couple of weeks back during the return visit, there's still no denying it has the makings of a longish day out. The books seem to suggest it was closer to a 16 mile, rather than an 18 mile day incidentally, but I'm no' convinced. The extent and location of my toe bruising is uncommonly accurate when it comes to judging distance.

Happily, this second sojourn also sticks in the mind; partly because of the favourable weather and consequent views, partly because of the spotlessly well-appointed Allt Sheicheachan bothy and partly because it genuinely felt that the trip was going to kickstart the 2013 Munro campaign. If you can rekindle motivation for slogging up Scottish mountains, 8 hours in the Spring sunshine should be the very thing. I'd go so far as to say that post-walk optimism abounded.

Now, obviously it hasn't been enough of a kickstart to get us out this weekend - it's looking a wee bit rainy, and I've got clematis to plant - but I confidently predict that from next Saturday onwards, we will be triumphantly marching up hills the length and breadth of the country.

Watch this space, as they say.

In the meantime, the Walkhighlands route is pretty much as detailed a description of the way we ascended  Beinn Dearg as you could want. And there are, as ever, dug photies.


There's no two ways about it - before long you're entering some big open countryside:

After the track reaches a 514m spot height it descends again and the Allt Sheicheachan bothy hoves - rather pleasingly - into view: 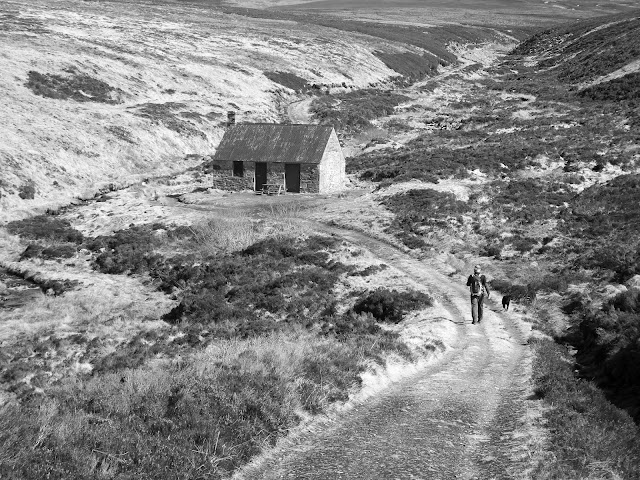 It's an impressive setup, it must be said. I'm not sure whether the main area has recently been renovated, but there's obviously work going on at the minute in the separate, basic, unfloored room on the right - it kind of looks as if there's a plan to make an upstairs sleeping area, and you rather assume the room itself will receive the attention it needs to bring it up to the impressively comfy level of what can only be referred to as the bothy's existing lounge. Not only does it boast a pair of moveable wooden bed platform affairs, it has - amongst other non-standard howff accoutrements - a fire extinguisher, a magazine rack, a mirror, and two toilet shovels.That's practically an ensuite bathroom.

Behind the bothy, once you've crossed the burn (which took a moment's thought, as the snowmelt had made it a wee bit friskier than I'd anticipated) it's a wander up a good wide track until you hang a left and start walking up a traditional zigzag stalkers path till you get to the plateau. And then, despite the fact it's a deceptively long way to the foot of the last wee climb; and despite the fact that the last wee climb is deceptively bigger than it appears; and despite the fact that even the final tiny pull up the summit rockpile is deceptively not at all tiny...you're there in a trice. Albeit a lengthy trice.

It was about now that I started to think that we'd broken the back of the ascent, and we'd be at the top in jig time, but it's still a fair clip. A plateau can be a fickle mistress. Or, just, you know, big. It's jig time to the summit from there though! 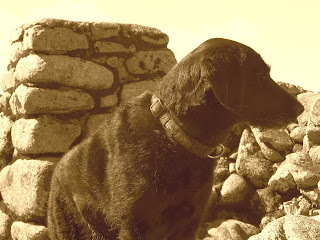 We elected to return the way we had come up rather than heading across to Bruar Lodge, so there's not a lot to add about the dauner home, other than to say if you're lucky with the weather like we were, then there's still a vista worth seeing as you're wandering back over that fickle mistress. ;) It's a good day out, Beinn Dearg. For a place that's less than two hours away from Bellshill in the car, it's got a pretty compelling remoteness thing going on. Recommended.