The Grand Old Duke of York's route to Carn Dearg

I've said plenty of times before that the walk in to the Ardverikie hills from Laggan is one of my favourites. I've been there in all seasons; in all weathers; for shortish daytrips and even for a rare wildcamp. It's not only prime hillwalking country but prime dogwalking country. It also contains one of Scotland's most unexpected wee beaches in a rather photogenic location. Further, it's pretty much adjacent to the whole Ben Alder massif, and as yet I've never had the opportunity/inclination/organisational abilities to get myself over to Culra bothy with a view to tasting all the delights that the area promises.

I reckon that's partly why I've had a notion for a while now to spend a goodly chunk of a summer day heading in from Laggan to pick off Carn Dearg. It's the only one that I had left to do other than Alder & Beinn Bheoil, and geographically it kind of makes sense to me to concentrate on those two if and when I get to Culra for an overnighter. Experience and history suggest that a night in any bothy usually involves excessive alcohol consumption, and consequent next day inability to climb much in the way of hills at all. So - a brisk daywalk to Carn Dearg would clear the decks for a bothy adventure in due course. The other bonus would be that whereas our last hill involved a knee-crunchingly steep ascent straight out the car, this venture promised a long walk-in before any climbing would be required.

And on that promise it duly delivered.

I had done a bit of careful route planning and measuring, poring over my well-used OS map and brandishing a bit of green string - which is obviously much more accurate than the "half a thumb is aboot 1km" method I commonly employ. This suggested an overall route of around 19 miles. Spot on. What I didn't factor in terribly well was that this included the ascent to the Bealach a' Leamhain (which sits at about 750m), closely followed by a descent to around 500m to cross the Allt Cam which runs to the south of Beinn a' Clachair, the consequent climb from there to the 1034m summit of Carn Dearg, and - most troublesome of all - the pesky retracing of steps to that 750m point on the way home. Oh, and it was boiling hot all day. It goes without saying that Scottish hillwalkers like me and Andy aren't used to that, and the rare "dehydration experience" wasn't lessening the impact of the distance travelled/height gained combination.

I'd like to say that despite the fatigue I enjoyed every moment of it, but that would be a big fat tired sweaty lie. I didn't enjoy walking back up to yon feckin' bealach one iota. My legs were in bits. Or in purgatory - either way the effect seemed much the same. But, as ever with these things, once we got there, and realised with joy unbounded that we were only six miles from the car...and it was all downhill...the day became an unqualified success. Although it took me a couple of days to accept that wholeheartedly. 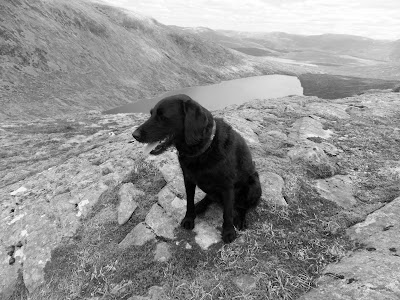 And that was that. Although apologies are due (a) to Berghaus for not taking their rucksack, but I just had too much stuff to fit in for what was a long walk into isolation and (b) to the unfortunate rabbit that made an unexpected appearance, and swift exit from existence when it met Jorja at the summit.

It's all part of the great outdoors experience, eh?