"I've found a thing that I didn't know existed - separate pages in the Blog. A dug friendly stand alone section seems a reasonable enough idea. Just think; when word gets out there'll be hundreds of people every day adding their own favourite dog-welcoming establishments to this page. Maybe. Assuming you can add comments."

That was the original idea, years ago. Whether it was stupidity on my part, or a recent Blogger addition, it's only relatively recently that I've managed to set up a comment facility. So, up until now we've been kind of stuck with my recommendations - all based on personal experience of course!

Because we live in Scotland there's little in the way of recommendations for hotels that allow dogs overnight, rather than just onto the premises - some of the website links will give a hint though. Generally if we're away with the dogs we'll be self catering. I'll add a list of places we've used in due course.

Anyhoo, technology having improved, if anyone has recommendations to add, fire away.
:0)

The Sheriffmuir Inn
We've visited here two or three times, and the food is different class. The nice thing about it is that they're quite happy for you to take the dogs into the bar area - upstairs from the main restaurant, and although it's not a huge place, the tables are set out in such a way that you can generally stick a dug under the table out of the way of the temptation of passing waitresses laden with food.

The Drover's, Inverarnan
Classic - probably the classic - roadside Scottish Inn. Dogs welcome in the bar. I have fond memories of an evening spent there when we were camping nearby. Jorja was just a puppy, and I had her in my arms, bouncing along to the ceilidh music the band were playing. It was attracting a fair bit of attention from the American tourists who were over for the golf at Loch Lomond. Dancing dugs in pubs are fairly rare, I suppose.

The Lade Inn, Kilmahog
Excellent stop when you're a regular traveller from the lowlands to Crianlarich and beyond. They only let dogs in the Bothy Bar bit, but it's a nice wee place, and I don't think I've ever had the girls in there without a staff member offering a biscuit!

The Moulin Inn, Pitlochry
Pitlochry's a nice place anyway, but this pub is a wee cracker. The food's generally really good, and there always seems to be a fine selection of hounds lounging about the place.

The George, Inveraray
Dog heaven. (Not in that sense!) We're regular visitors to Inveraray, and The George is one of the main reasons. Huge bar downstairs, and it's one of my favourite pubs anyway. 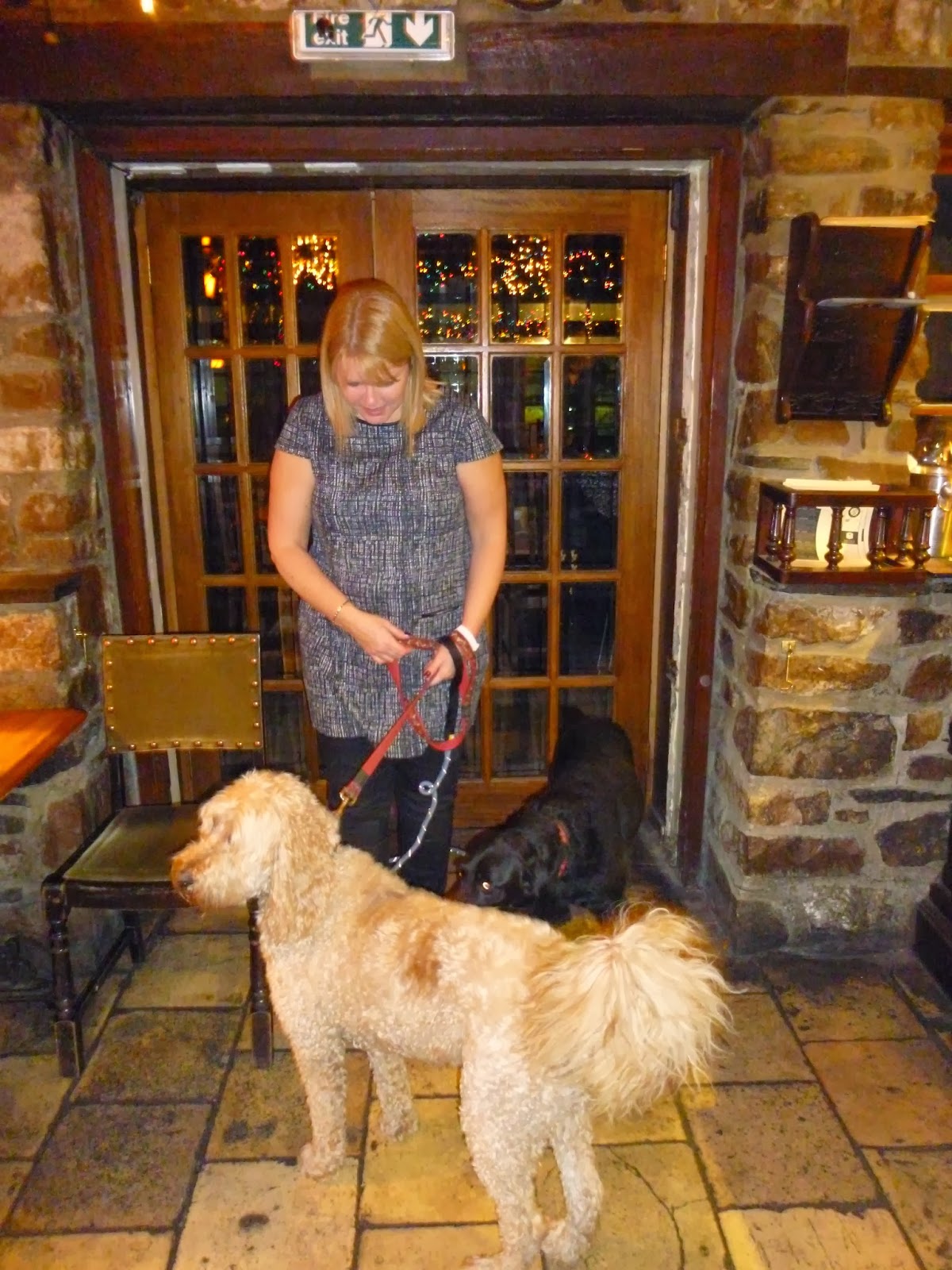 Not only are dogs welcome in just about all of the public areas (not sure if they're supposed to be in the dining room proper, although they let us in there with them one day) but the wooden floors in most of the bedrooms mean overnights with the dugs are fairly stress free - no particular worries if they come back less than pristine clean after a day at the Castle. It probably spoils you a wee bit - it's our default setting for dog accommodation. No problems with breakfast anyway - they'll serve you in the bar if you don't want to leave the dogs in the room.

Bridge of Cally Hotel
Again a good stopping off point on the Glenshee road. If I remember correctly, dogs are allowed in the bar "as long as they stay on the carpet"(!) Surprisingly good quality food in a wee hamlet that seems to be in the middle of nowhere, but which is probably deceptively close to a few places where people have money to spend on decent fare.

Update 2015. Me and Andy called in for a quick pint today on the way home from Braemar. It's still dog friendly. Indeed, given that the barmaid made a point of coming out from behind the bar to fuss over Jorja, and then volunteer that there were sausages left over from breakfast, and inquire if the dog was allowed them, it's currently the Wee Black Dug's favourite pub in Scotland!

The Badachro Inn
Ooh the food's good here. It's a wee bit away even from Gairloch, but it's been unfailingly welcoming whenever we've been there, and again there's generally at least one other dog there already when you arrive. I always find that to be a positive sign in a pub. It's old fashioned-looking...but very up to the minute in reality, if you ask me. An impressive set up.

The Kingshouse, Glencoe
Straightforward dog friendly walkers/climbers bar at the back of the hotel. Not a big place, but you don't feel odd squeezing in beside someone on their bench if there's no spare tables. It's that kind of pub. Dogs fit in here. We haven't stayed over, but the website says they have dog friendly rooms.

Update January 2014. We did actually manage an overnight in the hotel a few weeks back, and it's got the WBD seal of approval. The rooms - well, the one we were in anyway - aren't maybe sumptuous, but they're comfortable, clean, warm and perfectly in keeping with what anyone could reasonably expect in what is of course a hotel genuinely in the middle of nowhere. The one we were in had wooden floors, which is always good with our mud-prone dugs. (It may be of course that lack of carpet = dog available room.) The mutts aren't allowed in the dining room, which is fine by me, but the staff made it clear from the outset (we asked at check in) that they'd be more than happy to set up a table for us next morning in the resident's lounge. I've had breakfast in worse places: 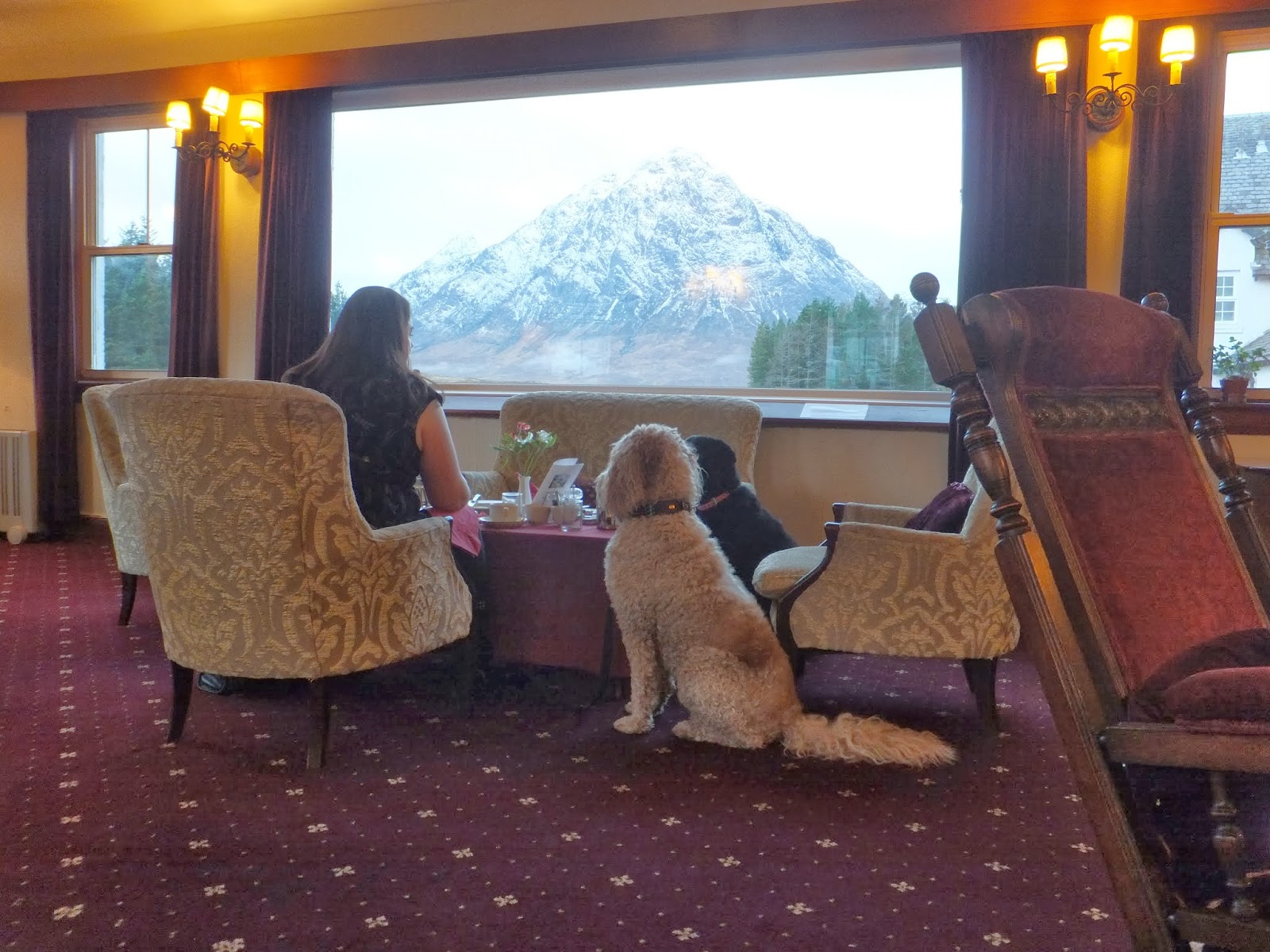 Bridge of Orchy Hotel
You can take dogs into the wee bar area right at the front of the hotel. That's the best bit anyway, in my opinion. You couldn't be more of a roadside Inn if you tried. It's a pleasant stopping off point, and they make an effort with the food. No overnight stays for pets though.

The Cluanie Inn, Glen Shiel
A road to the isles institution. A nice rambling bar, and when we were there there was actually a wee house dug wandering amongst the tables searching for stray titbits, which is only right and proper. The rooms we had were very nice. It's unusual to look out your window first thing in the morning and come face to face with a big stag.

Kilchoan House Hotel, Ardnamurchan
Decent sized bar, full of locals and their dugs, water bowls provided and stone floor areas which help if there's spillage of said water bowls when local dogs and tourist dogs take a dislike to each other.
;0)

The Coul House Hotel, Contin
This is different. A genuinely grand looking country house hotel that you would take odds against being dog friendly from its appearance. Not a bit of it. We were shown into what was almost a drawing room with big bay windows, posh carpets and leather armchairs. The drinks were brought to the table by a waiter, and they were accompanied by bowls of olives. Jorja has never been so confused - she knew it was food but she also knew that she didn't want to steal it. First class experience - dogs are most definitely welcome. Most of the others there that day were probably of quite impressive pedigree, I suspect. It's that kind of place. 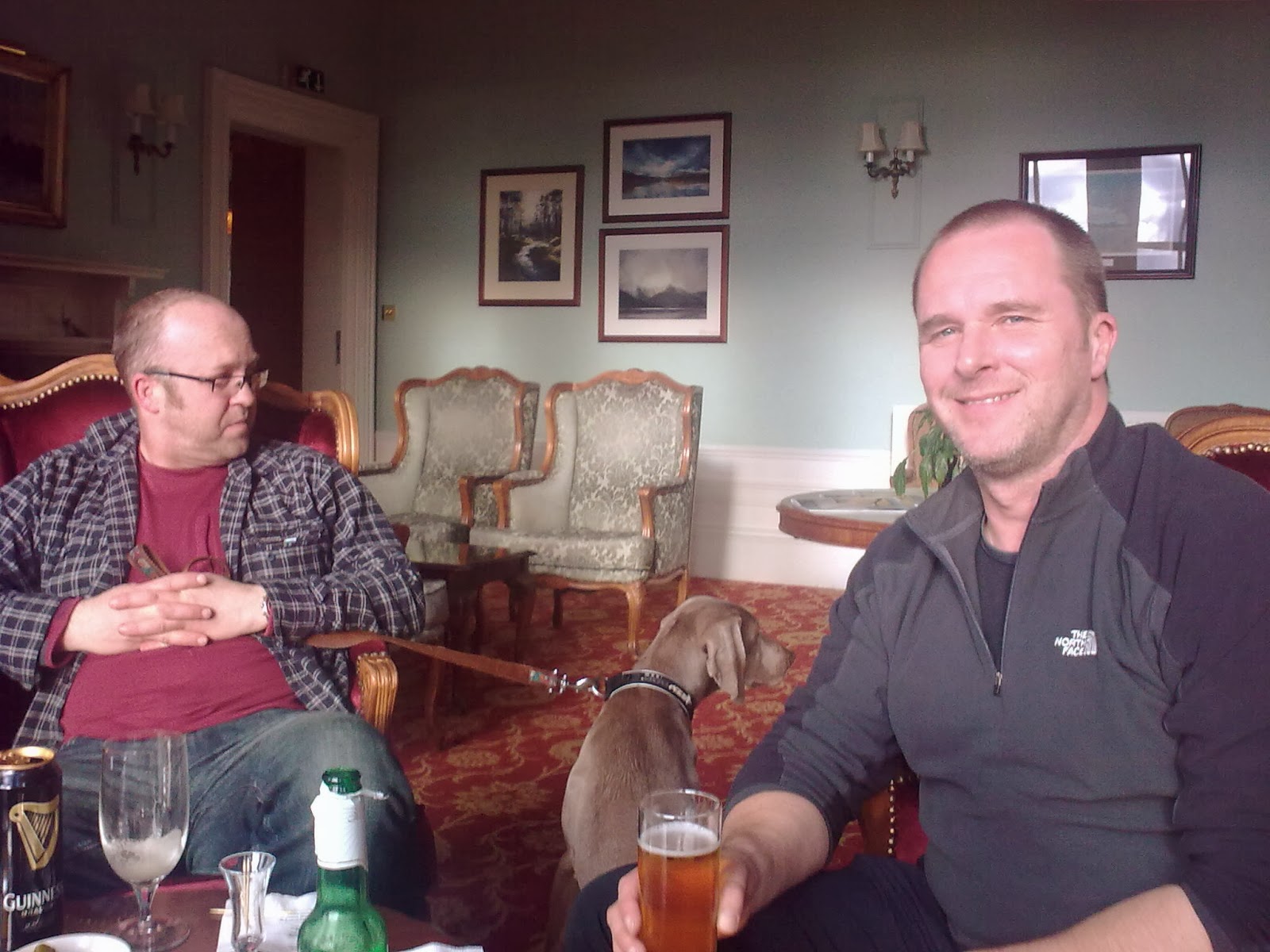 The Forth Inn, Aberfoyle
Nice pub. Superb pint. Big flagstone floor and plenty of dugs dotted around. I liked it enormously.


Benleva Hotel, Drumnadrochit
Highly recommended for overnight stays. They not only welcome dogs, they positively embrace them. The Wee Black Dug gives it 5 stars. The beer's rather good as well.

Ardlui Hotel & Leisure
Here's a bold departure! We haven't checked it out ourselves as of yet, but input suggests it's well worth considering. On good authority, as it were, I'm told there's a bar, restaurant, hotel, caravan park & marina. Dogs are allowed in all these areas as long as they're kept on the lead and are well behaved - which is entirely fair, even if it might cast some doubt on whether our two would last long! There's a £5 charge for dogs if staying in the hotel, and a charge in the self catering units as well. Sounds like plenty of scope for dug-related activities. Even better, there is apparently, at time of going to press(!) in summer 2012, "a new addition to the Ardlui family, a big puppy called Hector". It's always worth knowing these things. :0)
Update as and when I get to visit Hector personally.

The Old Bridge Inn, Aviemore
Now, Aviemore used to be a bit of an awkward destination from the canine point of view. Things have changed a bit though and there's now a genuine - and proper dug welcoming - pub right off the main drag. Nice old fashioned bar, with room to stick yer hound under a table, a few benches outside for the more clement Highland days, and - always the sign of a quality establishment - a big dog bowl in the porch. Nice pint too.

The Kames Hotel, Tighnabruaich
This was a good find. We hadn't been to this neck of the woods for years, but it's a well-appointed hotel, in a smashing location, and very comfortable. They couldn't have been more welcoming to the dogs. The hotel bar is an extremely nice place to spend a few hours and the staff are all genuinely keen on canine company. You know you're in a good place when a nice bloke off the lifeboat pops into the bar without his own dog, but with his pockets full of dug biscuits. The rooms were spacious and warm, the food highly recommended, and breakfast served up until a sensible 10am. First class stuff.

The Five Roads, Alyth, near Blairgowrie 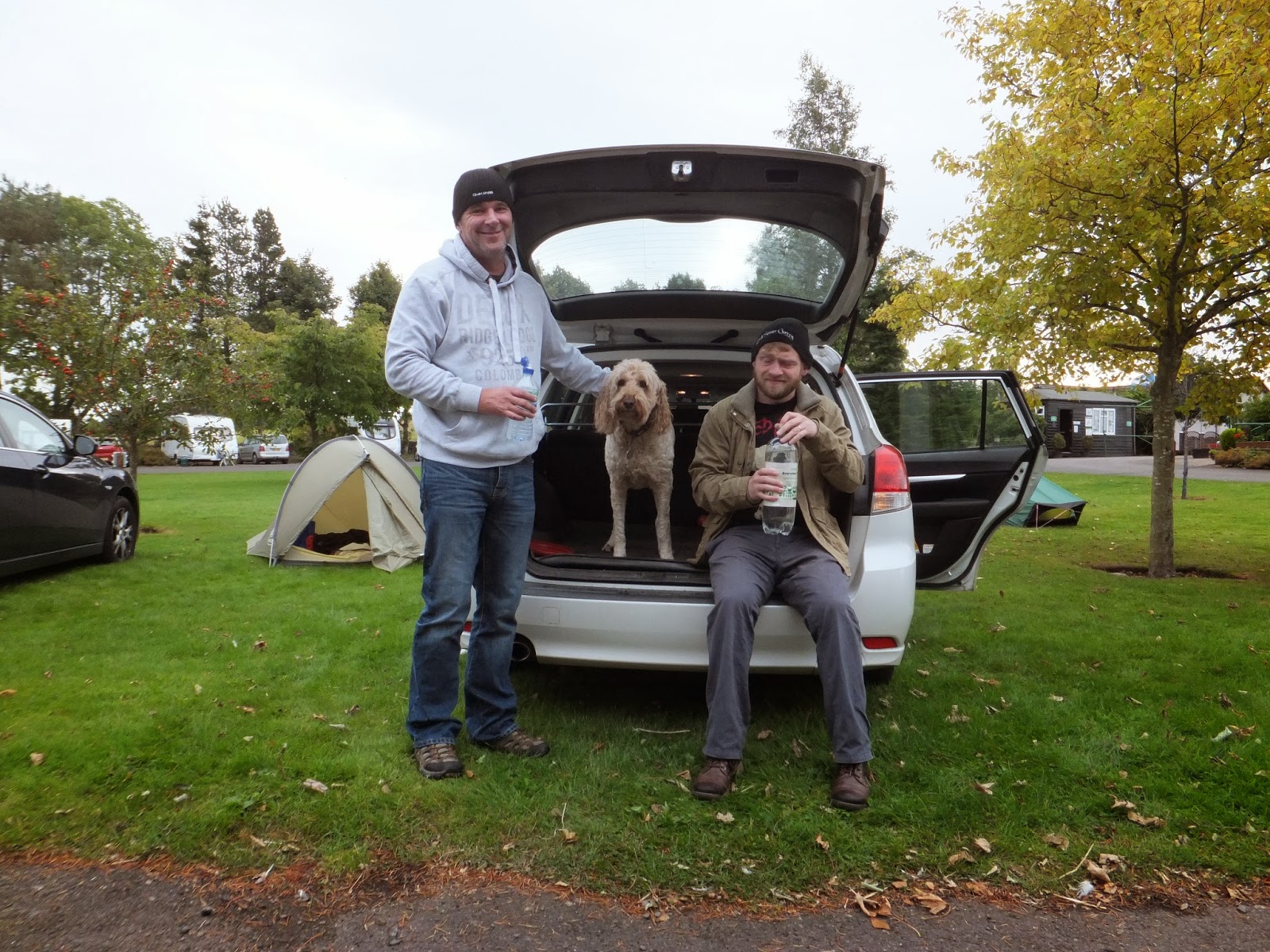 Not a pub, but a campsite - well it's mainly a caravan park but we've used it a couple of times for taking the tents. I know most campsites are dog friendly, but this place deserves a mention because it's a nice size, the facilities are spotlessly clean, it's friendly and welcoming, and it sits literally right next to a dog friendly pub. Now, I'm not claiming that the Blackbird Inn is the most high end of establishments, but when you're camping, and you've got a dog, and you just want a handy place for a pint where said dog will feel perfectly at home, then you're not going to have much room for complaint on those grounds.
In the final analysis, I've been there twice and got acceptably drunk with no dog-related worries whatsoever, so the whole Alyth experience deserves an entry!

Update August 2015. It's a much busier wee pub on a Saturday afternoon. Me & Andy happened to be passing by on the road home after a walk up a hill near Edzell, and it was (a) still dog friendly (b) full of chatty punters who fussed over the dogs, and (c) a perfectly OK place for a pint.


The Bow Bar, Edinburgh
This was a bit of a find. Late night city centre pubs that allow dogs. Wonderful. Me and Gordon stumbled across it after a Blackberry Smoke gig at the Liquid Room. It's not only a great pub, with a fantastic range and excellent bar staff, but the mutts are welcome too. There's even a jar of dog biscuits behind the bar. Highly recommended.