I've been reviewing the holiday, and to be perfectly honest part of the reason that it was relaxing and enjoyable was that we didn't really do all that much.

Lie in, beach with the dugs, potter about and then tea in the pub.

So there's not a lot of point in an in-depth description and analysis of each day's happenings, eh? Not when happenings were thin on the ground.

And as I mentioned earlier I failed comprehensively to get up any hills. As the week worked out, the only day I could have managed it was the Thursday but although I was up early, and packed and ready to go, I just didn't feel well at all. Don't know what the problem was, but I didn't fancy being out in absolutely the middle of nowhere and having a funny turn, so a swift return to bed was the obvious option. Too much fresh sea air and healthy living, maybe.

A wee selection of photies to finish off the holiday posts then:

On the Tuesday we headed up the road a bit to Poolewe. A tremendous sense of history about the wee place. During the second world war, the great Arctic convoys were assembled in Loch Ewe itself before leaving for the ports of northern Russia. There's an atmospheric memorial garden above the Loch. I liked the Churchillian quote - you'll probably need to click on the photie to read it: 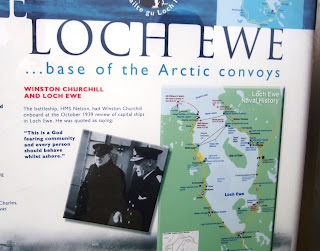 This article is also worth a quick glance, I think. True bravery.
And on that very subject, you can just about make out the reference at the top of the picture to the American ship the SS William H Welch running aground and breaking up just at the mouth of the Loch. The story makes awful sobering reading. Uplifting as well though.


We hadn't been clocking up the road miles thus far, but we drove all the way to Lochinver on the Wednesday, and it was well worth it, because not only did we see what I am confident is the world's biggest couch made out of bits of broken pottery... 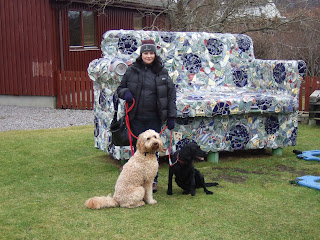 but also what looks suspiciously like the place they filmed Close Encounters: 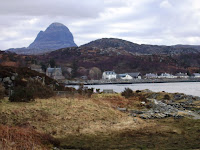 Who'd have thought it?