I felt that as I had been all domesticated and sociable on Saturday, it was only right that I should maintain my selfish streak by going for a walk on my Jack Jones on Easter Monday.

I settled on Mullach Clach a Bhlair. It's the other one that you traditionally do from Auchlean in Glen Feshie, along with Sgor Gaoith. The forecast was fantastic again (unlike when me & Andy had a go at Sgor Gaoith last July). Indeed, MWIS had the firm answer "No rain" to their eternal question "How wet?"

Jorja seemed none the worse for her over indulgence on the Saturday night, so she came along. I was initially going to take Molly as well, but I had anticipated there might still be a fair bit of snow around higher up, and until they invent full body anti-balling plates for dugs with fleecy coats, Molly's very much a three season hillwalker. In the event the snow had all but disappeared, so I reckon she'll be back on the Munro trail shortly.

I didn't fancy the route following the river through Glen Feshie which seemed to take you through some prime farming land - not at lambing time anyway. Instead I just headed up the Foxhunter's path before Auchlean and followed the start of the route that we took to Sgor Gaoith last time. I suspect it's six of one & half a dozen of the other as to what's quickest, and anyway, I enjoyed the path last time. Sometimes it's nice to get out the car knowing that you can have an hour or so of navigational indifference!

The weather and the holiday weekend had brought folk out in their droves. The substantial carpark just up the road from the farm was full to the gunwales. It transpired that just about everyone was there for the views from Sgor Gaoith mind you, as opposed to the less spectacular scenery visible from my intended target.

The path climbs up Carn Ban Mor, and makes pretty light of the ascent. It's one of those gradients that's certainly steep enough to need a good bit of effort, but you can feel yourself gaining height quickly and consistently, so it's a reasonable trade off. There was still some snow in Coire Gorm, to the right of the track. 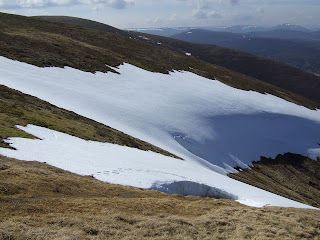 You're then simply striking south westish along an obvious path until you reach an even more obvious path which pretty much takes you to within 200' or so of the summit. Nice views over to the hills bounding the Lairig Ghru - Braeriach, Cairn Toul etc, and back towards Sgor Gaoith itself. 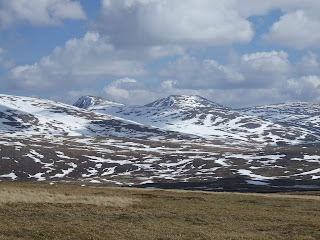 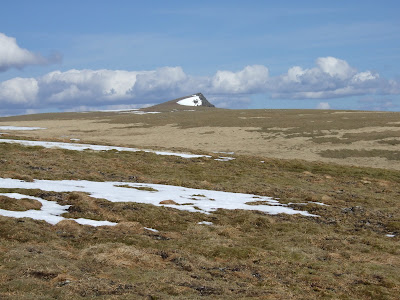 The Moine Mhor (Great Moss) is rather empty. The path seems to take a long way round, but deviating from it would result in a fair amount of peaty tussocky boghopping, so it's best to stay on the beaten track.

The snow is fighting a losing battle with the melt water and the rising temperatures, but it's leaving some interesting wee patches behind in its retreat. 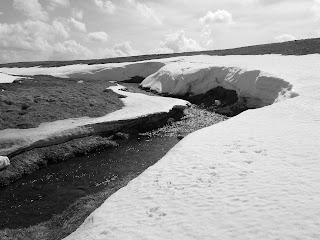 There were very few people heading the same way as me, and it was thus something of a surprise - bearing in mind the vast open spaces - that there had clearly been a multiple bike pile up earlier in the day. 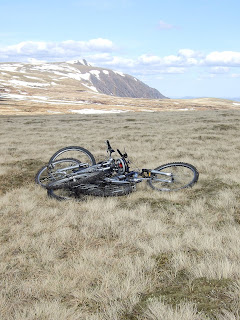 What was even more of a surprise was meeting Cameron McNeish just below the summit. I didny quite have the bottle to ask him if I could take his photie, but ach, chances are I'll run into him again. I mean, he must go hillwalking a fair bit.

Either he, or the chap he was with, had a smashing big black labrador called Affric, which hit it off with Jorja straight away. He stopped for a few minutes to chat, and based on that brief meeting I can confirm he seems a perfectly pleasant chap. He didny ask how much my rucksack weighed, or why I was wearing big heavy leather Raichle boots on a perfect path in glorious sunshine, or anything.

The summit of Mullach (etc) isn't all that exciting, so a brief sandwich stop and I headed back down. 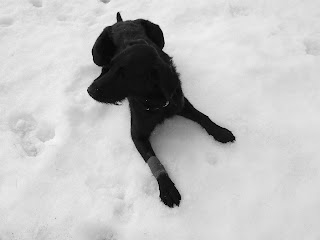 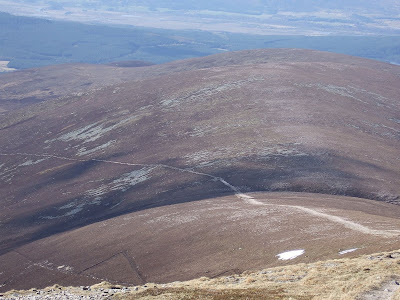 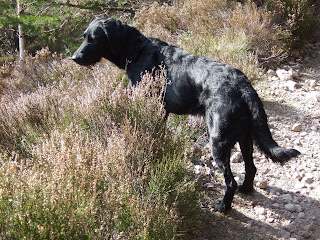 I actually saw an eagle when descending the path beside Coire Gorm - and I know it was an eagle because I had taken the wee binoculars for once, and I could see it properly, but...I didny get a photie of that either. I did get one of a pine cone in the sun though. 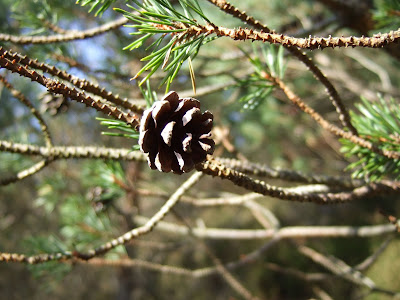