We'd left the car at Crianlarich, caught the north bound train at 10:21 and set off from Corrour about 11:30. (As a fine point of interest, the train splits at Crianlarich, so you're best to sit in the rearmost carriage from the off, to avoid an unseemly scramble when they announce that fact.)

Now, the last train south leaves Corrour at 18:25 - not, as the ticket inspector stressed - "half past six". There speaks the voice of experience, I imagine. Even in comprehensively unpleasant weather, we only took about two & a half hours to get up Beinn na Lap, and back to the station, so there's masses of time. If conditions had been better, we'd probably have had a go at the Corbett Leum Uilleim, or at the very least gone for a ramble along the shores of Loch Ossian for a couple of hours, but we were wet and disgruntled enough that the option of jumping on the 15:21 train north was a definite possibility. That would enable you to get into a warm dry carriage for half an hour or so, and then break the journey at Tulloch, Roy Bridge, Spean Bridge or Fort William, before catching the return train all the way to the car. It's a superficially attractive idea, but none of us had any idea whether Roy Bridge or Tulloch had any pubs where we could take the dug and get a pint; I knew from bitter experience that Spean Bridge has two pubs which won't allow dogs; and Fort William is...well, Fort William.

So we elected to spend three hours or so in the wee hut on the platform, variously railing at the SYHA website; the weather; and the fact that if we'd known the cafe was shut we could have cached supplies of alcohol and warm clothing when we'd got off the train in the first place.

It would be idle to deny that exploring the extent of our temporary home didn't take all that long. The possibilities were limited: 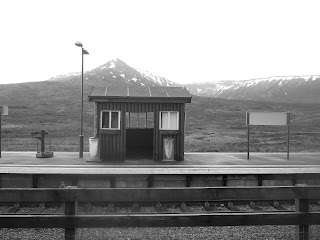 After an hour or so we were all largely agreed that if you're going to go to the trouble of building a waiting room/shelter/hut in a place as isolated as this, you might as well spring for the extra tenner it'd cost to put a door on it to keep out the wind.

No matter though. It was at about this time that Gordy had what proved to be a brainwave, and stuck his phone onto speaker mode and started playing some music. I genuinely can't emphasise enough what a difference that made to the whole situation. I'm not even sure why - it didn't make things any warmer or drier, but the experience of waiting on that platform was immeasurably improved once accompanied by the strains of Biffy Clyro giving it plenty.

It was also only then that the full extent of the photo opportunities afforded by the platform at Corrour revealed themselves. Here are some tracks: Here is a luggage weighing machine (I think!): And here's, um, some more track: On sober reflection, Jorja was the best placed of all of us to find the wait comfortable. The keen hillwalker and gear nerd will recognise in this next picture the advantages of the layering system: She's lying on top of my custom built Cioch jacket; she's wearing her own Ruffwear coat, and she's got the only survival bag we had between the three of us draped over her. And she's blissfully asleep, because she couldn't care less that there's still an hour to go before the train arrives.