I meant to mention after last weeks uber-soggy adventure that a couple of the bits of kit I had proved themselves again, in "real time" testing.
;0)

Now, I was utterly sodden, soaked to the core but that Finisterre baselayer was already starting to dry out after the first  few minutes back at the car, which were spent faffing about changing boots, breeks etc. I'd elected to get my bottom half into dry clothes first, not least because it meant I could keep my waterproof jacket on during the process. I don't know why - I couldn't have got any wetter - but it seemed to make sense at the time.

Anyway, the point is that although the Brisa was as wet as everything else, it wasn't too cold or too clammy and I'd be willing to bet it wouldn't take unduly long for your bodyheat to dry it out to an acceptable extent as soon as you're under cover. I can hear you saying that I could have tested that theory oot properly by leaving it on while we travelled home in the car; and you're right; but as you weren't there you can't truly understand what a miserable day out it had been, and how, accordingly, I was in no mood to put up with even the slightest water-related discomfort for a moment longer than necessary.

The other big hit of the day (and I've been meaning to sing its praises for ages) was my Paramo Torres gilet. 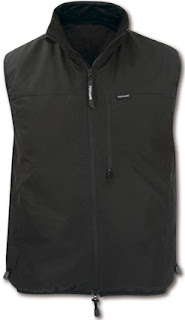 I've had this for years, and I think it's a fantastic thing altogether. The whole point as you can see, is that you stick it on over all your other layers for insulation, and that it works just as well whether you're dressed in a baselayer and just need a wee bit extra warmth for a sandwich stop, or you're swathed in every item of clothing that you've brought with you, including your soaking waterproof jacket, and you need to retain as much core body heat as possible to get back to the car without expiring. I've often found that I stick it on at a summit, and keep it on thereafter at least until I'm well on my way back to the start of a walk. If wherever you are is cold wet & windy (and let's face it, what Munros aren't?), it's not too warm to wear while on the move.

The one I've got is the original version, and it weighs in at 490g. The keen eyed amongst you will spot that the link above suggests the "average weight" (across the size range) is 370g. I doubt that very much, and interestingly the Paramorians also claim that their new Torres Gilet Lightweight comes in at an average of 330g. There's something no' right there, I fear. However I of course care not a jot for weightsaving claims: all I can say is the full fat version I own works a treat. And it's got more insulation, which is rather the point of the thing.

The blurb mentions that the thing packs down into its own chest pocket for storage, and that's undeniably true... 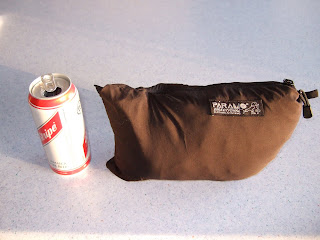 ...but I've never really found a better way of packing it in a rucksack than just stuffing it in loose - it sort of fills up unused space if you do it that way. It's not, and doesn't lay claim to be, waterproof but in all the times I've had occasion to wear it it's never become saturated and it's never failed to do it's impressively insulaty stuff. 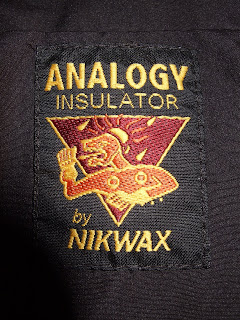 1. After a year or so I managed to break the two way front zip. The downside to this is that you can't unzip it completely, because the bottom zip puller won't disengage altogether. The upside is that I promptly discovered that by leaving both pullers together, roughly midway up the zip, you can don the thing over your head like a smock, rather than struggling to "do the zip up" with consequent excessive and embarrassing flappage on seriously windy hilltops.
2. The side pocket zips are "top to bottom" rather than the usual way round. I thought I'd sussed the perfect use for that feature - if you like walking with your hands in your pockets you can pull the zip down to rest on your wrist and create a sort of draught seal.

Further research reveals that the solo walker can do that with one of the zips.
;0)