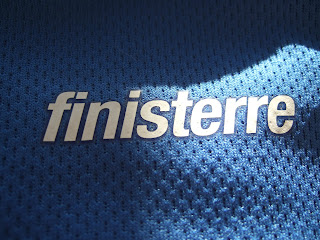 I had mentioned in passing when I reviewed the Peter Storm breeks that I'd also been sent a baselayer to try out. It was another of their own brand items, a thermal baselayer. Now, what with the unseasonably clement weather we've been having north of the border over the last wee while I haven't had the opportunity to actually test the thermal aspects, but first impressions were that it's a jolly soft, not too clingy, just-the-job-for-wearing-next-to-the-skin type of affair. I'll return to tell you all about that once the weather turns cold again. Next week, probably.

In the meantime though, Millet's PR folk clearly have tentacles all over the place, and it transpires they also do work for Finisterre. There's been no shortage of exciting postal deliveries over the last couple of weeks, and no mistake. I'd heard of Finisterre, and I'd noticed elsewhere that some of their stuff was quite highly thought of, so I was quite eager to give their Brisa baselayer a try.

It got not a bad first run out on the round of three in Glen Shiel last weekend, and I have to say I'm hugely impressed with it.

What the blurb says:
The Brisa Baselayer is lightweight, durable and designed for high activity, temperature regulating performance. The fit is slim and contoured to the body with flat lock seaming throughout to reduce areas of potential rub.

With an interlocked construction, the fabric utilises a three dimensional structure so that any moisture absorbed is spread over as great a surface area as possible. This design maximises wicking speed and dry time, and with more air trapped in the garment, improves insulation and temperature regulation.


What I say:
Er, to be perfectly honest that's spot on. It's a fantastic bit of cloth altogether.

For anyone who's particularly interested in the "lightweight" claim, my trusty kitchen scales have it at 177g. To give that a bit of perspective, and comparison, I've got an old Ronhill baselayer that I tend to wear in the summer. Not, you understand, because I ever run anywhere, ever, but because it was a thin, highly wicking affair that served a purpose on the hill. It weighs 174g, but the Finisterre shirt feels a lot more substantial. It maybe that the old Ronhill is a bit washed out now I suppose, but it never felt as robust and, well, comfy as the Brisa. I'm accordingly quite hopeful that the "durable" bit in their description will prove accurate.


It is quite a slim fitting top, but in a relaxed way, ie it doesn't feel like you're struggling into a lycra corset - if one can imagine such a thing. That's not based on personal experience, honest.

Now, for those of us who are carrying a bit of excess timber, something that's contoured to your body isn't necessarily a selling point, but hillwalking in Scotland tends to mean that days when you're out in one lightweight baselayer and nothing else are rare indeed. Whatever, it's no' the shirt's fault if you fill it too much. What I can say in all seriousness is that it does the job exactly the way you want it to be done. It's got more wicking capacity than a candle factory doing overtime; there are absolutely no itchy seams or annoying loose threads or rough areas, and at the end of the day in Glen Shiel I reckon it was significantly less sweaty and...you know, cold and sticky, than just about anything I've tried before.

That "three dimensional structure" seems to refer to the unusual look and feel of the fabric. Perforated isn't the right word, and I'm not going to succumb to the temptation of saying it's like a teabag, but there's a bit of aeration going on, if you want me to get really technical. The thing is, it works, and their reference to "temperature regulation" is on the money. Cosy yet cooling. That's a hard trick to pull off! 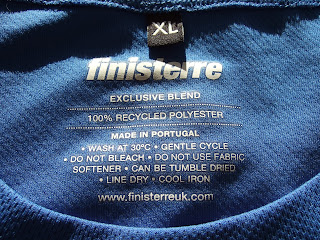 The other standout feature, whether in use or after washing, is how quickly it dries. Spookily so. Even the areas at the cuffs, which are double thickness material, seem to allow the moisture to disappear as fast as any demanding/perspiring hillwalker could wish. Five minutes out on the line and it was ready to wear again - and it doesn't seem to need any kind of iron, cool or otherwise.


How does it compare?
As well as the Ronhill top, the baselayers I've used over the last few years (outside the winter months anyway) are a short sleeved Rab Aeon T-shirt, a Craghoppers something or other, a Black's Technicals baselayer, and, my default position, Berghaus Tech_T long sleeved zip neck things.

Long story short, if I can live without the collar which the Berghaus ones have, and which I'm used to, then I've found a new favourite.

Overall then?
The very dab, as we say north of the Border. As an added bonus, my beloved says I suit blue.
;0)

I'm away to gaze longingly at the other stuff on the Finisterre website.

Oh, and before I go, a wee nod to Big Kev, who is clearly a man of longstanding gear expertise!