Weather in "Not Rubbish" Shock 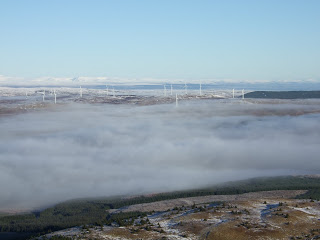 Back in real time. The forecast was marvellous for today.

(I was only able to get out for a few hours in the morning, because my mother was to pick up her new car today, & I'd promised to go with her. The anticipated unpleasantness over the salesman's misguided attempt to alter the agreed method of payment & delivery didn't ensue, as it turned out, but I wanted to go along anyway.)

Off to Meikle Bin yet again. I've never seen it in conditions like this. Saw a white rainbow on the way up. Fair bit of snow lying around. Carron Valley reservoir was frozen - the whole thing, as far as I could see. Disconsolate geese walking out to the middle of the water. There was a white rainbow, & i took a couple of photos. I've only ever seen one of those before. I could see above the clouds towards Crianlarich, although the hills at Arrochar weren't visible - clouds were too high in the valleys between. The whole of Lanarkshire was hidden below the tops of thick cloud. (Well, of course it was below the tops, but I could see those tops, if you see what I mean.)

Maw's car duly picked up, & she got it home in one piece.

A nice day. And, it's Saturday, it's nearly midnight, and I now haven't had a drink for a week. That's almost as rare as a white rainbow.