What's been happening then?

I decided last Friday that the weather forecast looked reasonable enough to head back to Kinlochleven and have another go at Binnein Beag. Andy was up for it, but we both thought an early start was in order. I was actually up almost as soon as the alarm went, and I picked him up just after 7. Reasonable drive up, and we were walking by 9:30. I had Molly, and Andy took Cara.

Molly was good. When she's at heel, she's pretty impressive. I'd be fairly confident of keeping her under control, regardless of distractions, if she was there at my side to begin with. Not convinced about "long distance" control yet, and I reckon that might require a lot more practice of the Gundog Man's patented "extending lead and choke chain" method. If I can bring myself to do that, of course.

There was a fair bit of snow about, quite deep in places. I was surprised at the extent of it, and that made progress a bit slow. For future reference, I worked out what I had done wrong last time. You should take the left turn on the stalker's path where it looks as as if it's going to take you up Binnein Mor. It then levels out again, and deposits you at the path which leads on towards the left of Sgurr Eilde Mor, and thereafter towards the col from which you need to descend before climbing up again to the foot of Binnein Beag. That zigzag path on the map is actually going down, not up. Idiot. ;0) 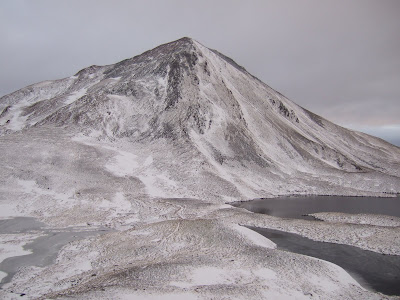 By the time were on the way up the other side though, we were getting a bit concerned about the amount of daylight we had left. I didn't think we had been walking all that slowly, but it had taken us about three & a half hours to get to a point where we could see the wee lochan at the foot of Binnein Beag, and by that stage it was well after 1pm.

There was at least another 45 minutes or so left in getting to the top and back to the lochan. After a couple of minutes swithering, we elected to go for it. We both had headtorches, and a lot of the route is on a landrover track, after all.

It was steep and it was snowy, but our estimate was about right and as it turned out, we were on the summit at almost exactly 2 o'clock.

Of course, that meant we had been walking for four and a half hours, and there was only about two and a half hours of daylight left - but hey, it's another hill done, eh?

The trek back up the zigzag path was nae fun, I don't mind admitting. 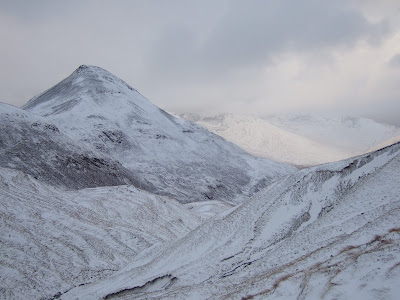 The view back towards Binnein Beag was nice enough, though.

As it turned out, we made rather good progress on the way back to the Mamore Lodge. Three hours, on the button. We didn't need the headtorches until we were five minutes from the car.

The dug was knackered. She spent all of Sunday sleeping, and hasn't actually moved that much today either. She's no' a wee hill dug like Jorja!