Well, obviously. For one thing, Molly's back but Jorja's taken her place at the training.

Thre's no doubt that the fella has got her walking to heel, chasing her ball and sitting & staying - all in a field of sheep. I know this to be true, because I saw it.

He's old school, I think. It's choke chains and giving the dug a skelp if she doesn't do what she's meant to immediately.

So that's the other reason for the mixed feelings.

Having said that, even if it is a form of aversion therapy I freely admit that six months ago I'd have stuck the dogs in with a ram so that they got a proper doing, if it would have avoided the livestock-related unpleasantness that we've had with them.

We've to pretty much keep Molly on the lead when we're down the park over the next four or five days, so that it gets reinforced that she's no' the boss. And we're generally going to be firmer with her in the house. She disny get rewarded for doing what she's told. That's the natural order of things.

I'm missing the wee dug already. It'll go one of two ways. Either he'll tell us next weekend - when we're allowed a phone call - that she's the best dog he's ever worked with, and we should breed from her, or he'll be phoning us by Wednesday asking that we take her home 'cos she's so determined to chase things that his methods are useless.

At that stage, there'd be nothing for it but to send her to a dog psychologist. It'll come as little surprise to the attentive reader that Mr Gibson isn't much persuaded by the whole dog psychologist thing.

There was nary a backward glance from Jorja as she wandered off with him today. Just as well, or else she'd probably have been wandering straight back into the car. 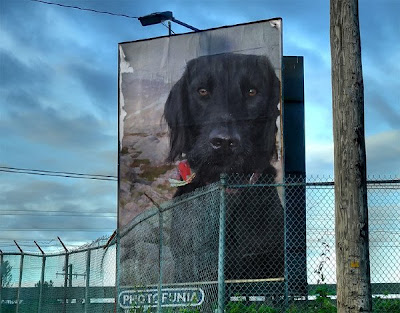