So, Halloween turned out better than most years. Day off work. Left the house around 8am, and after a bit of a delay in the morning traffic, I was at Doune to meet Gordy by about 9-ish. Transferred the impressive contents of his boot into mine, and we set off for Glen Etive.

We could probably have made better time on the road up, but it was a nice day, and we had Black Ice on the stereo, so sometimes you can't rush these road trips.

We started walking at about 11:45, in rather spiffing weather. It has to be said though that once we got higher up, it was a darn sight colder than I had been expecting. The wind felt a lot stronger than the forecast had suggested, and there was a right good windchill making its presence felt. Matters weren't helped by me walking slower than an elderly arthritic tortoise, as my legs had decided to use the snowy slopes of Glas Beinn Mhor for cramping practice. (See what I did there?)

It took a wee while to get to the top, and although the views were beautiful, we elected not to hang about, and indeed to head back down the way we had ascended, as it was clear that it was going to be dark before we made it back to the car. At the end of the day, we were probably only walking by the light of the headtorches for about 20 minutes or so, but I wouldn't have wanted to have left it any later.

Gordy has his usual fine selection of photies here.

After that, we repaired to the Red Squirrel Campsite in Glencoe. Good site, but most of its signage had clearly been done by someone a wee bit unbalanced. Hmm.

However, our timing had become a lot better by then, because we got there early enough to book in, have a beer in the car, pitch the tents and then get down to the Clachaig for food, more beer, and a heavyweight folky duo belting out classics for the tourists.

A cracking day, all things considered. 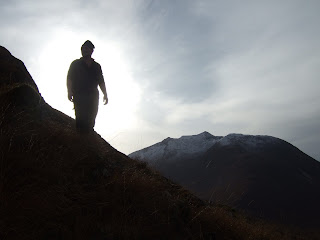