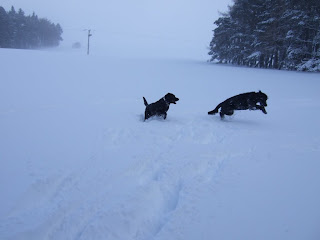 It was clear very soon after we got out the car that the dugs were enjoying the wintry conditions. The wee black dug in mid air is Jorja. The virtually identical wee black dug on the left (that appears to be smiling, if you look closely) is Andy's Maura.

As you'll have gathered by now, there was a wee bit more snow at Glen Mark than there had been on the road to Edzell. It was actually breathtaking. Certainly, I've never seen that sort of accumulation for years.

The picture above was taken just after we went through the gate which leads to the start of the walk. The Munro Magic route says "Follow road NW through Glen Mark on east bank of river to Queen's Well". 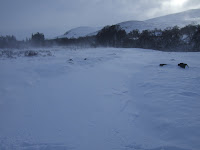 Now, I accept that there's a distinct(ish) path type of affair commending itself to the eye in that picture. It's tolerably clear what way you're supposed to go. I'm no' entirely convinced that the casual observer would regard it as a road, but we'll let that lie.

So that was definitely the way forward.

There was a problem though... 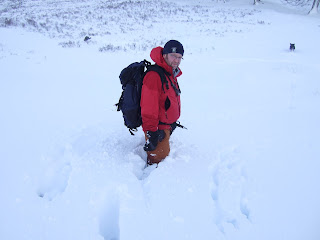 Nonetheless, completely undaunted we pressed on until we came to another gate. By this time, we must have been almost...ooh, I don't know...half a mile from the car. It had taken us about an hour. An hour of snowy fun, but an hour all the same.

Suddenly a rabbit broke from cover. I say it broke from cover. What it actually did was to hop half heartedly from left to right, straight across the path ahead of us. Jorja didn't notice it straight away. As soon as she did, I was waiting for the inevitable. The inevitable of course is that the rabbit gets aff its mark and skips effortlessly across the surface of the snow while the dog flounders helplessly, chin deep in the drifts.

What this rabbit did was to just sort of stop...and sit there... while Jorja (deaf to all recall commands by the way - I should be getting my money back) was making a Herculean effort to get herself out of the snowdrift she was in and make it the last five feet to get to it before me & Andy could plough through the stuff from where we were and avoid the whole unfolding horror.

She made it, of course.

Suffice it to say that Andy was capable enough to put the rabbit oot its misery. But - the wee thing hadn't been without its troubles even before the dug went near it. It was just...falling to bits is probably the best expression - the lower half of its jaw was rotting, its teeth were rotting...and well, let's face it, if it had been in rude health it would hardly have been lying down in front of a slavering dug. Whether the heavy snows have caught it out, cutting off the food supply I don't know, but our best guess was that it was starving to death anyway, so maybe the misery it was getting put out of wasn't exclusively the dog's fault.

To put the tin lid on it we saw another three (I think) recently deceased rabbits during the embarrassingly short walk. And I'm not sure I've seen many more than four dead rabbits on all the other hills I've done put thegither.

So, it seemed like time to head back to the car.

(BTW, bonus point if you can spot both dugs in that last photie. Clue: One of them's heading off on a frolic of its own and the other yin's digging a hole.)