Munro Tally For 2009 Doubled At A Stroke.

Andy had got himself a new pair of boots during the week, so he was anxious to get out somewhere - anywhere - on Saturday to test them. For my part, I was anxious to get up any sort of hill before my knees locked up permanently through lack of use. Unfortunately the forecast included MWIS favourite soundbites like "appalling visibility"... "whiteouts"... "mobility very difficult"... "will feel like minus 25 in the wind"..."don't go north of Perth or you'll die horribly", etc, etc.

Thus, until about 8pm on Friday the revised version of the plan was to do bugger all on Saturday and wait for the better weather predicted for Sunday. However the fly in the ointment was the Holland V Scotland game on Saturday evening, which meant that drink would inevitably be taken and nobody would be in much condition to go anywhere on the Sunday. So, Saturday it had to be, factoring in the forecast and the necessity to be back down for the kick-off.

At 9pm the decision was finally taken that tomorrow's destination was Glenshee(ish). The plan was to have a go at Carn an t-Sagairt Mor, from Glen Callater. That hill was the one I'd missed out during last summer's Lochnagar round with Gordy, Paul and the now elusive Big Kev. Not this one! You can find him nae bother! ;0)
The map disclosed that there was a good long walk-in through the glen, so that meant we could at least get used to the conditions before we started climbing out of the relative shelter. The vague fallback position was that if the conditions were too atrocious we could at least turn tail and give the dug a run about up the Cairnwell or something.

It must be an age thing, but I find that these days I cannot get up, organised and out the door to go hillwalking in any less than an hour & a half. I was picking Andy up, so the alarm went off at 5:20. Just like old times.

We were at Auchallater Farm at 9:30. It was cold and windy but nowhere near as bad as feared. I had the Wee Black Dug with me, but Andy had formed the view it was too chaotic trying to spring one of his four at at that time in the morning without the rest realising and rebelling, so Jorja was flying solo.

It takes about an hour to get down to Callater Lodge.

No sheep or other farm-related potential dug distractions and it's an excellent path/road all the way. Very much better than your average landrover track - when we were coming down there was actually a townie car sitting outside the lodge, which goes to show the quality of the work that, er, Jock must have done originally.

You hang a left immediately before the lodge, and then the path curves eastish above Loch Callater. The depth of the snow meant that following the path was guesswork more than anything, but it was fairly clear (well, the second time I looked at the map, and after Andy pointed out to me where we were) that we were just swinging round the nose of Creag an Loch and then veering north east towards an obvious bealach.

It was at this point that we saw two herds of deer converging, with probably about 100 in each group. Quite impressive, to be honest. They were a long way off though, and it was impossible with my wee camera to get any more than a vague impression of a breakaway faction...

...but it was a cracking sight altogether. Jorja clocked them, and made as if to set off in pursuit, but she was kidding nobody. She was perfectly happy to chase mountain hare and black grouse all day but a couple of hundred deer gave even her pause for thought.

The weather was odd. We were getting ferocious gusts and full-on blizzard conditions, but it would only last for about 5 minutes and then everything would calm down, and the sun would do its best to break through.

When it was cold, however, it was dauntingly cold. I hadn't realised that there was a tiny gap between the top of my goggles and the bottom of my hat. After about two minutes it felt like somebody was tightening a metal band around my forehead. Or at least that's what I imagine such a thing would feel like. It's no' a Wednesday evening pastime in the house or anything.

Once we reached the bealach the fence posts which lead to the summit came into view. The fence posts are ideal for use as a guide; rather less use as anything to do with a fence. On the plus side, they also lead you to Scotland's least necessary gate.

It had taken us an awful lot longer than anticipated to get to that point though, so we were swithering over whether we'd make the top and still get home in time to see the first of Scotland's goals. In the event we pressed on and got to the summit 4 hours after we left the car. There's two cairns, about 100 yards apart up there so I'd be inclined to visit both of them if you're ever up that far! The Wee Black Dug approves of multiple cairns mind you, because cairns often mean foodstuffs, or crumbs at least.

It was only around two & a half hours to get back to Auchallater Farm - which shows the advantage of being able to follow your own footprints through deep snow, more than anything. On the way down the weather had perked up significantly, and the views south east beyond Loch Callater were much improved. 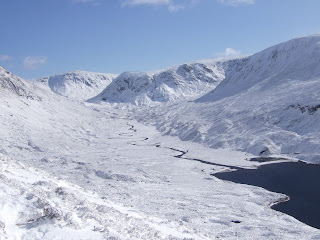 A good day, although my nose & cheeks feel like they've been sandblasted, and are glowing a fetching shade of red, as a result of them being the only bits of flesh exposed to the blizzard all day!

From the carpark to the house took a mere two and a quarter hours, so we were back in time for the football. Regrettably.