Marion was working 'til closing time in the pub on Wednesday night, so as usual I left the house about half ten and took Molly out for her ablutions, en route to popping in for a pint.

Just before I got to the pub, Molly started tugging at the lead. She'd spotted a crow flapping about on the pavement, next to the (rather busy) road. This struck me as a wee bit odd, mainly because I don't see an awful lot of birds wandering around on local pavements after dark. As we approached, it seemed kind of reluctant to leave, but Molly's increasing excitement eventually proved too much and it flew off. I then noticed something scampering across the pavement from the point where the crow had been onto the grass verge. Ah, I thought - a moose. That'll be what the crow was after. From a distance it did look kind of pale for a mouse though. Also, it didn't seem to want to make good its escape. It was just sitting there on the grass. Oh, I thought. The crow's had a go at it already. It's half deid and I'm going to need to put it out it's misery.

Then I picked it up, took it into the pub, Marion found a big plastic container and we tried to make it feel at home! 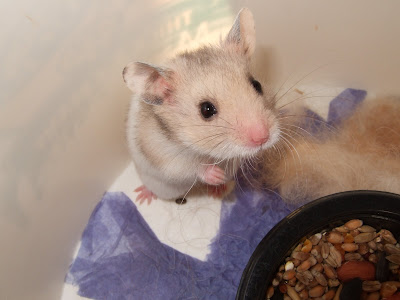 You get very few wild hamsters in Bellshill. And this poor wee soul wasn't having much luck. Rescued from a hungry crow and taken to a house with four cats.

Ach, we'll foster him for a few days and see if he's claimed.