I was struggling for inspiration for a walk yesterday. The forecast was for tree-splitting sun, so it would have been a pity to miss the opportunity, albeit the grass was in dire need of getting cut, and a lazy day drinking beer in the back garden seemed quite tempting.

I then hit on a cunning plan to go back to Fersit. I'd thought last week that it'd be an interesting walk in the good weather; I still had one of the Munros on the horseshoe to do; and it meant that I didn't need to take last Saturday's maps out of the rucksack at all, thus saving valuable time!

It was just me & Jorja. It was technically Molly's turn, but she really doesn't like the weather when it's that hot. The big fleecy coat is not a hillwalking bonus. In summer or winter, to be honest.

I arrived at Fersit (having travelled up via Dalwhinnie, of course) around 11, and got just about the last space in the carpark. I set off the same way as last week, staying on the track until I'd passed the last fenced-in field, and then headed south. The cattle which had been in the field last week were further up the hill, so I diverted a wee bit to the west, and discovered quite a good path that runs alongside the "middle" branch of the burn that flows all the way down from the lochan in the corrie. This meant significantly easier progress than last time, even taking the weather conditions into account.

Sron na Garbh-bheinne looked much friendlier when you could see ways up it. 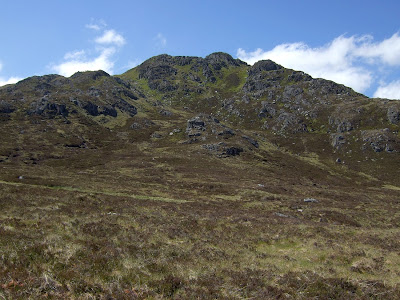 There doesn't appear to be a path that takes you onto the ridge, and I saw two different sets of folk going up two different grassy rakes. It's just a case of finding a way that suits you, either through heather or over rocky outcrops. I felt I was making quite good time, and once you get onto the ridge it's only about 10 minutes to the summit of Stob Coire Sgriodain. Loch Treig remains hidden for a remarkably long time, then you get over a wee rise and suddenly there it is. 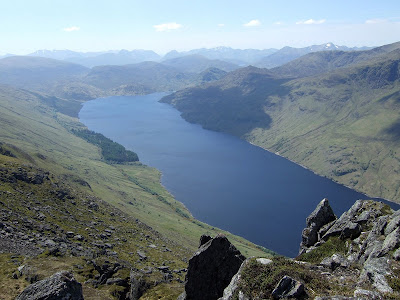 I was pleased to see it, because when me and Paul did the two hills on the opposite side, it was clagged in as well, so I was starting to wonder whether it genuinely existed.

You've got nice views of those hills - Stob Coire Easain and Stob Coire Sgreamhach - all the time you're on the ridge.


The approach to the summit gets quite rocky: 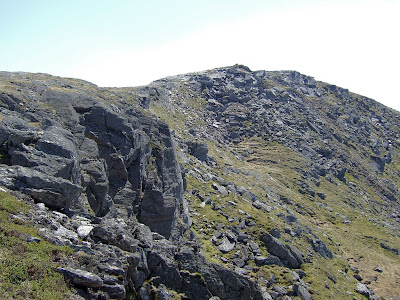 As it turned out it was surprisingly busy at the top. Nine folk altogether, and five of them must have been making extremely good time because they appeared from nowhere!

Jorja was on the lead, because she could sense that someone was on the other side of the cairn, consuming tasty sandwiches, and I wanted to avoid any food theft-related unpleasantness. 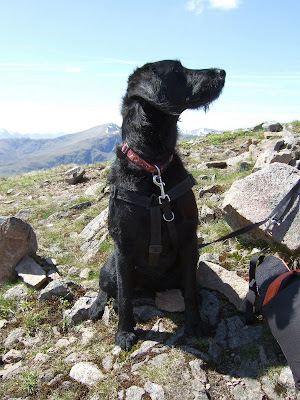 From there, it's a nice wander down to the bealach above the head of Coire an Lochan: 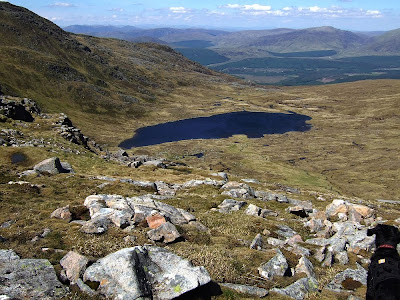 Chno Dearg, and the onwards route thereto, were obvious, although it might be a different matter in mist or rain, as there's not much in the way of a path, and I think it'd be fairly easy to wander off to the south if you weren't paying close attention. In good weather, you just head for the big round lump: 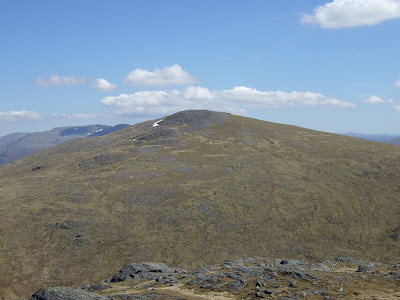 I decided against visiting the subsidiary top of Meall Garbh, because the views of it looked rather better than the views you'd get from it. Also because I couldn't be ersed as it was awfy warm.

It was only about an hour from the summit of Sgriodain to the summit of Chno Dearg, and it didn't feel terribly taxing. Mind you, I was doing no more than pottering along taking photies and playing with the Wee Black Dug in various lochany puddle things, as she was feeling the heat a bit too. 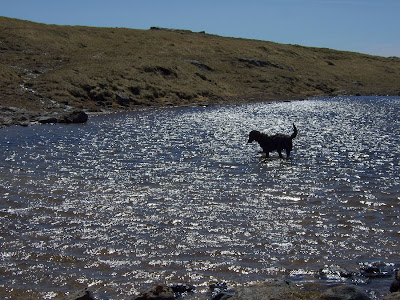 The downward route from Chno Dearg, although a different one from last Saturday, again involved a pathless trudge through heather, then rock, then bog, and is uninspiring to say the least. Still, the sun was shining and the views remained good.

I headed back to Bellshill the same way I came up. Sorry to see the "Police incident" tape, and an ambulance and the Coastguard(!) rescue truck near Loch Laggan. I haven't heard what that was about, but hopefully no news is good news.