There's A Dug In My Bucket

Marion and me had been swithering for a while about getting the dogs neutered. The bulk of the veterinary advice suggests it's the right thing to do, but there was always a feeling that putting a dog through elective surgery wasn't quite - well, fair.

Our vet had certainly said that it was probably wise to let the dogs have one season. Jorja's first time in heat was a kind of false one, so we waited until this year when she had her first proper season, and after a few weeks had passed, booked her in. We were going to get both dogs done at the same time, on the reasoning that if they were both recuperating they'd be less likely to batter lumps out each other, but then the vet said that he thought Molly might be going into heat, so she had a reprieve.

The Wee Black Dug went in today. The operation all went according to plan, but she looked a sorry wee soul when I went to pick her up late this afternoon. We've to keep the bucket on her for a week, and then take her back to get the wound checked.

I was feeling a bit guilty already, and the expression on her face isn't easing my conscience. Even with the jazzy pink pawprints on the impressively sized "Funcol". 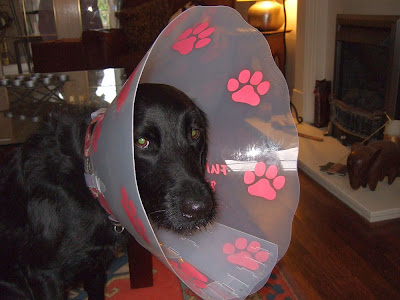 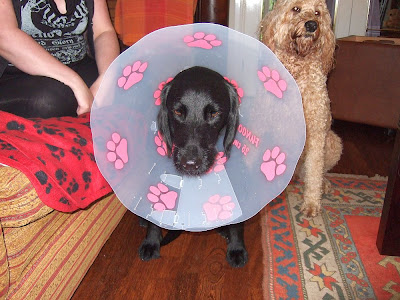