Holiday Snaps - Part 1 (of not many, honest)

We packed a fair bit into our week away. The flat we'd rented for the week was just the job. Centrally located on Mull in Salen, which is really the main crossroads on the island, handy for the ferries; for Tobermory and fairly well placed for sojourns to the south.

It was also located slap bang in the middle of Salen, which meant the nearest neighbour on the left was the off sales and the nearest on the right was the pub. Which did takeaway food, as a marvellous wee bonus.

I think that because we've been to Mull a couple of times before we didn't feel the need to run about daft trying to soak up every sight on the place so the week turned out to be pretty relaxing, although we were out and about a good bit.

There was also the sad, back to reality aspect of the week, of course.

Moira's funeral was on the Tuesday. The way the ferries worked there was no prospect of getting home and back up on the same day, so we decided - with no little regret and reluctance - that rather than subject the dugs to two 6 hour journeys in the space of one day, Marion would stay put, and I'd get the Craignure to Oban ferry at 5pm on Monday, travel down and stay at home that night, see that my mother got through the funeral OK and then rattle back up to catch the last boat at 6pm on Tuesday. The timings meant that although I could be at the church service, I wouldn't be at the crematorium. Hardly ideal, but Martha was getting herself worked up about me driving too fast to catch the ferry, and so starting to say that I should just stay on Mull and not break the holiday at all...so it was the only compromise that sort of worked.

My mum did well. It's often the days after a funeral that can hit the bereaved however, so we're trying to keep a wee eye on her now that we're back. Her pals have been great, though.

As it turned out, we visited the beach at Carsaig on the Monday, always with one eye on the clock for me to catch that boat! 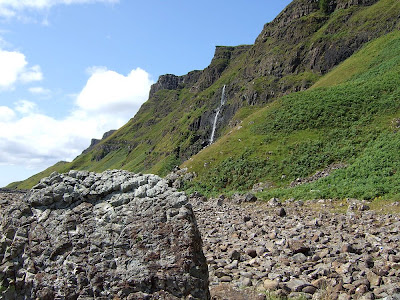 There's a 6 hour walk to the Carsaig Arches but time was too tight for that so we walked along the shingly, rocky coastline for about 2 hours, passing under a fairly impenetrable cliff face. My keenly honed geological senses told me there were some Interesting Rock Formations en route. 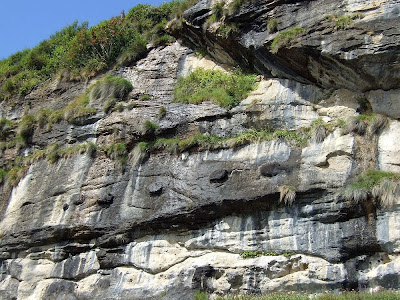 We were heading for the Nun's cave, and what seems to be called the Sphinx rock.

One can see why. 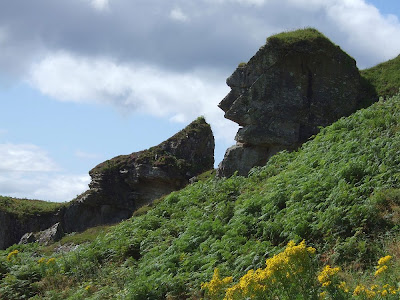 The cave itself was somewhat spooky, not least because there was a badly decayed feral goat corpse hidden in the shadows half way into it which gave all of us, including the dugs, a moment's pause for thought when we stumbled over it. I wisny allowed to take a picture of it, on grounds of taste, but I did get a photie of one the many mysterious crosses carved into the wall. 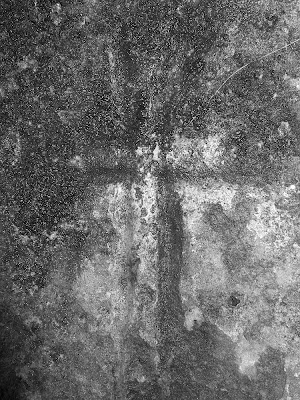 A great walk for the dogs, who made the most of the opportunity to stretch their legs properly for the first time in a wee while. 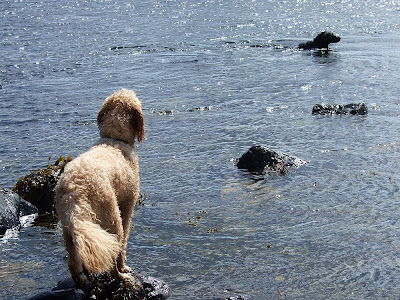 And when they weren't doing that, they were posing for the camera. 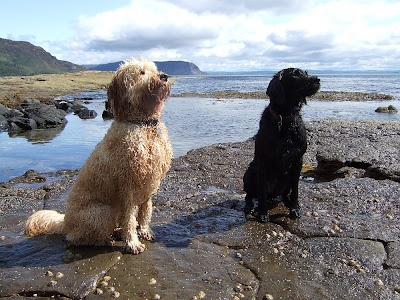