With the increasingly later-dark mornings I've taken to putting my wee emergency headtorch into my pocket for our jaunts down to the castle. Essential for locating missing tennis balls and the like. Of course, what's going to happen at some point in the winter is that I'll be out on the hill desperately searching through my rucksack for it, only to realise that it's still sitting in my dugwalking jacket in the hoose.

So I decided it was a justifiable expense to get another one, for canine related activity and nowt else. Surprisingly they didn't have one at Go Outdoors at lunchtime, but I'd to go to the supermarket tonight anyway, so I wandered up to the Glasgow Fort where there's a branch of Blacks as well. I knew they were closing branches, but I kind of assumed that they'd be keeping a big flagship one like that.

Wrong. In truth, it was a wee bit sad because the last time I was in there, it seemed like all they had was TNF sports casual(!) gear, and you couldn't get anything that you might actually want to go hillwalking. Tonight, the place is stripped half bare - but everything is half price and its piled (fairly) high with useful bits & pieces. I've aye got mixed feelings about real closing down sales, but I suppose they're better selling off stuff than giving it back, so if anybody's passing, you can get a litre of that Nikwax Techwash for £5 (it's £14.70 at Hike Lite), and 4 rather smart titanium tent pegs for £7.50. 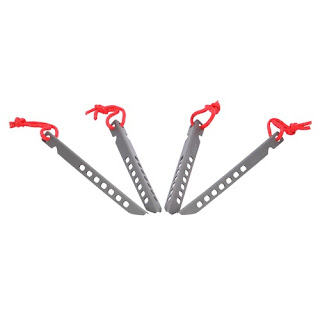 Ultimately, I didny resist the bargain.