Our neighbours, Mick & Irene are always really good to us when it comes to looking after the menagerie if we're away on holiday. They sort oot the cats quite the thing. For this trip back to Mull though, we took the view that it wasn't fair to land them with all the medication and complex food routines.

Mel (the wee fat cat) is on a regime of diet biscuits to get her to lose weight so that her arthritis improves. She's also to get painkilling medicine in her food, so it's important to get her to eat the proper stuff, and also important not to let any of the other cats get to her bowl. Bob, the big black & white tom, was recently diagnosed with renal problems so not only has he to get special food (which the other cats shouldn't eat) and a pill once a day (which the other cats mustn't eat) but he also has to be kept away from all other food 'cos it overworks his system. Blue & Lara aren't on any medication and can eat any food they want. As long as it's not Mel or Bob's.

Still and all, with some trepidation, big Bob was duly sent for a holiday of his own to Avonbrae Cattery, and they took excellent care of him, managing rather better than we had been doing to get him to take his pills. Which meant Mick had a slightly more manageable task and didny have to work quite as hard for his bottle of Tobermory malt.
;0)

As I mentioned earlier we didn't do an awful lot when we were away, or at least what we did, we did at a leisurely pace, but there were still a few photies of our relaxed, semi-aimless wanderings.

Loch Frisa is the very place to try and see Mull's white tailed eagles. There's a smashing walk through miles of forestry road, albeit with sections of cleared forest and rather impressive log stacks to remind you that the scenery changes from year to year up here as folk make their living. 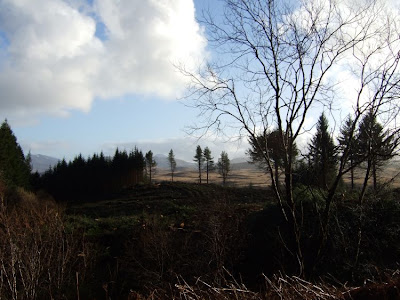 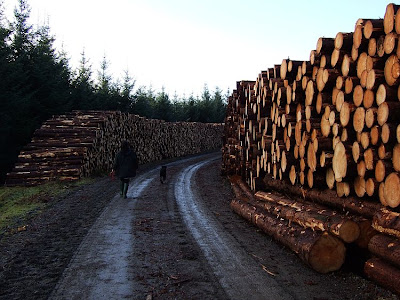 In passing - and I'm glad I didn't know this at the time - the Mull forestry folk rather overstepped the mark by deciding to slaughter (apparently) hundreds of deer that had encroached onto the forestry land during the prolonged snowy weather. This despite the local gamekeepers and ghillies assuring them this wasn't necessary, and that they'd happily drive the deer back onto the hills, given a couple of days. It's beyond my comprehension, and it's certainly made me look at the Forestry Commission with a rather more jaundiced eye than before.

The loch itself is a lovely spot. The RSPB run guided eagle spotting trips to the "hide" right next to it. It's quite a salubrious hide, if you ask me. 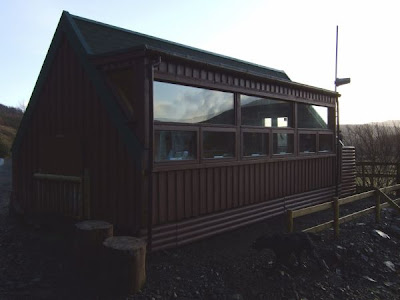 And if the kids get bored birdspotting there's always the adjacent adventure playground. Pity about that one rule though... 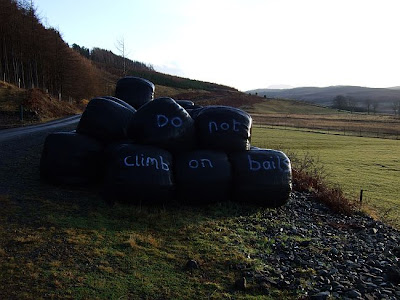 As it turned out we did see an eagle. We didn't actually realise it at the time, but we were looking at a scruffyish bird - obviously a raptor of some sort but equally obviously not a buzzard (the buzzard being the only bird of prey that I can actually identify with any certainty). It was perched on a tree near the head of the loch and was then flying brief sorties here and there. Too far away to get a picture with a wee camera like mine, but we got quite good views of it through the binoculars. After we had spent a very pleasant hour or so watching that; and the myriad of small birds attracted to the hunners of feeders near the hide; and the interesting unexplained ripples on the mirror-calm surface of the loch ("it's an otter...it's an otter...oh...no, wait...it's a duck") we started to wander back up the track and met a nice lady in a wee car coming the other way. Turned out she was the RSPB warden that actually runs the trips, so she was asking if we'd seen anything. We felt a bit daft mentioning the non-buzzard, but she listened to the description, and the location, and told us that was the immature/junior sea eagle. That's exactly where it hangs around and exactly what it does. Excellent! Oh, and the thing in the water certainly wasn't an otter but it wasn't a duck either. No - it was a goosander. So there.

One thing she said that tickled me was that you shouldn't always expect to see a white tailed eagle swooping majestically from the sky to pluck a fish from the loch. The ones in Mull aren't daft, and have learned that they can catch fish with very little effort if they just sort of walk about nonchalantly at the points where the various burns flow into the loch. It's a nice image if you ask me.

She also said that they'd had Bill Bailey up a wee while before, filming for his "Birdwatching Bonanza" programme. That particular episode was on telly last night as it happens. Now, sea eagles are good, but I confess I'd have liked to have spotted Bill Bailey on Mull as well.


On the Tuesday I was up bright and early to try and have a stab at Ben More. The forecast said that it was going to be windy, and that it could get up to gale force later in the afternoon, so the sooner I got off my mark the better, I figured. The starting point for the walk was only about 20 minutes from the hoose. It's another one of Scotland's nicer carparks. 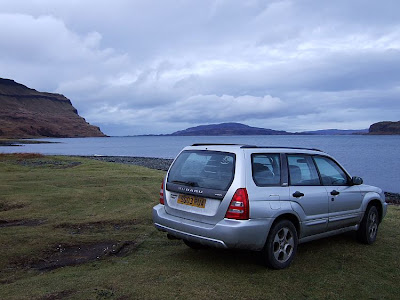 You can't really miss the beginning of the route. 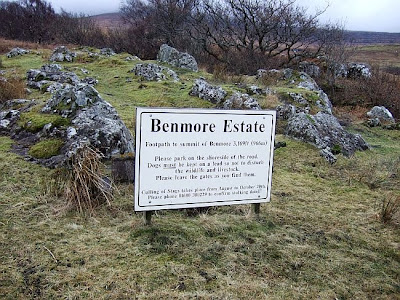 I have to admit that after such a long layoff from hillwalking I was really struggling. Progress was awfy slow, but then again I was on holiday and had no reason to hurry. You follow the path - a bit indistinct in places - up beside the burn into the corrie. 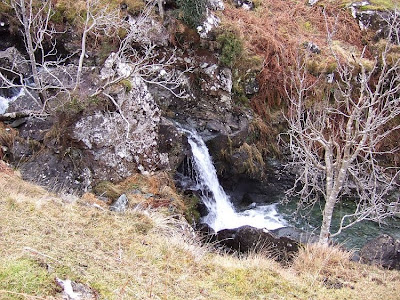 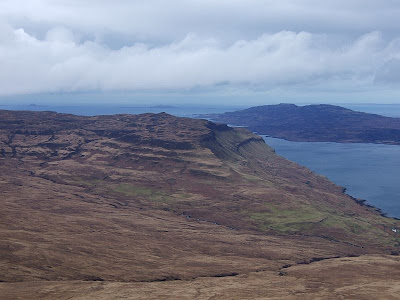 The views opened out as I got a bit higher, but it was thick cloud above about 700 metres. There were sheep virtually all the way along the route, so I was glad I'd decided to leave the dugs back at the house. To be honest the real reason for that had been the fact that I'd absolutely no idea what to expect in the way of ice and snow higher up, and I didn't want to be struggling with crampons, ice axe and dog leads.

At about 650 metres, the path had become more defined and gravelly underfoot, and from there it's actually marked by fairly regular cairns. It's very reminiscent of the path up Ben Vane, as it happens. However, just as the path improved the wind decide to pick up. And when I say that, I mean it decided to pick me up. Or at least it was doing it's best. I've never been in quite such windy conditions up a hill before. The time me, Paul and big Jon did Mount Keen came close, but this was something else. If I gritted my teeth, braced myself and did a sort of half-crouching lean-into-the-face-of-the-gale manoeuvre, then I could make perceptible forward progress, but about every ten steps there'd be a gust that would literally knock me backwards, or sideways...or indeed whatever way it wanted to. After about twenty minutes of that I realised I was just being daft. Especially because visibility was now down to about 10 yards in the clouds, and I knew that based on the views I'd had lower down it must be spectacular on the summit when it's clear. If I'd be coming back another time for the views anyway, there seemed little point spending another miserable hour and a half battling up the remaining 500 feet of hill that should only take a fraction of that.

Plus I wis absolutely cream crackered. 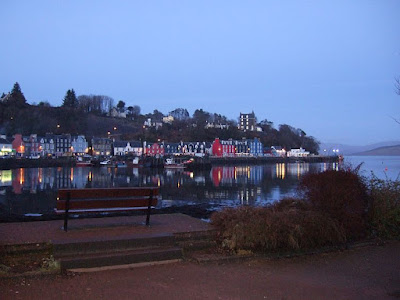 So, off to Tobermory in the evening for a non-celebratory burger in Macgochan's! Recommended, by the way. Good food, and they take dugs.
:)