I mentioned that Paul was the only one with a camera when we invaded the Gorms a couple of weeks back, so given he was kind enough to send me the pictures I thought I'd give a few a wee airing on here.

It's the familiar walk in to Derry Lodge from Linn Of Dee, and then you decide whether to start up the left or right side of Derry Burn. We took the latter option, which was a good call from the big stick point of view. 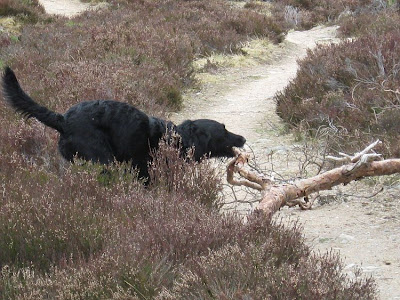 Determined as she was though, and having expended no little effort dragging it onto the path in the first place, even she couldn't quite pick that one up.

It's a fine tramp up the whole length of Glen Derry. The weather was fairly kind, although at one stage near the deer fence-enclosed bit we were getting what can only be described as showers of warm hailstones. Hmm.

Nonetheless, the views up to Coire an Lochan Uaine on the left were nice, albeit hinting that it could be a trifle parky higher up. 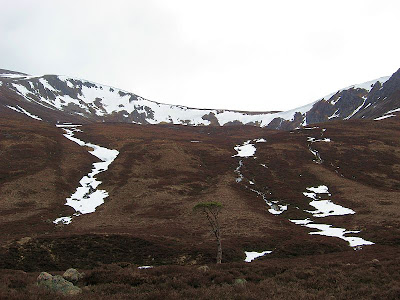 We veered left and soon came to the wee wooden bridge that spans what is, I think, still called the Derry Burn, although it's more obviously the outflow from Loch Etchachan high above. The dugs weren't keen and elected to explore the possibility of a watery crossing... 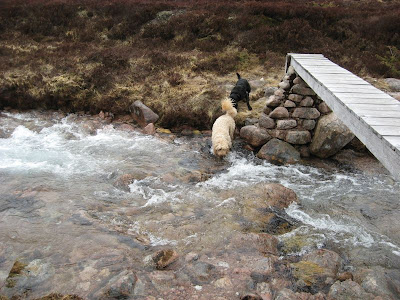 Jorja could clamber onto the bridge but was feart to cross, while Molly couldn't climb up but didn't object to the concept of using the bridge. Big dug's problem was easy to solve with a bit of physical effort on my part, but encouraging Jorja to follow me resulted in her unexpectedly deciding to squeeze past at pace and nearly put me aff the thing. ;0) 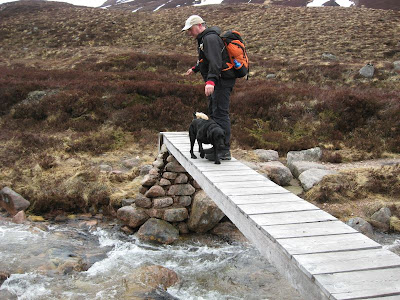 As we climbed higher the dugs made the most of the extensive snowy patches. I like this photie. You can just tell they're having fun: 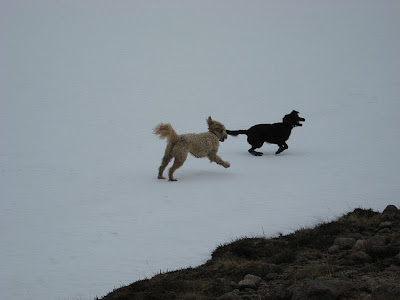 It's a fairly steep trudge at this point, although the path is first class, and before long the Hutchison Memorial Hut hoves into view. 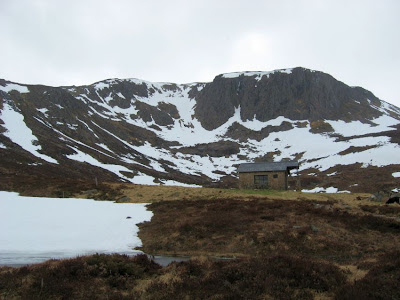 A grand name for a hut. A grand location for a hut. Those cliffs (I say cliffs, obviously I mean Creagan a' Choire Etchachan. "Cliffs" is easier to post though) deserve a second look: 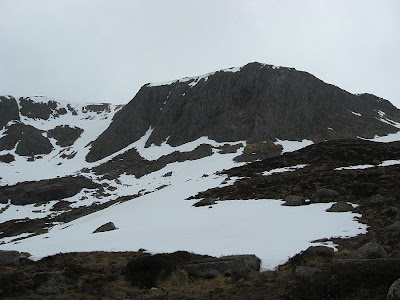 The only worry I had all day with the dugs - and the only time they were on the lead - was once we got to the Loch. 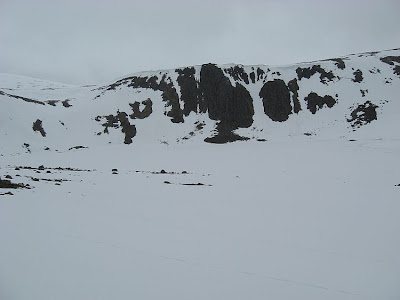 I was genuinely surprised to see it still frozen (completely, apart from a wee section near the head of the burn) and indeed covered in a snowy blanket. That's not a problem per se for the dogs, but ever since that poor bloke we met in Bob Scott's a while back lost his collie, I've been paranoid about this kind of situation. That feeling wasn't helped because both dogs were sniffing the air suspiciously, and scanning the snowy tableau across the loch expectantly. What that usually means is that a mountain hare is about to burst from cover and go hell for leather across their line of sight. As you can imagine, I was working out the various scenarios that could arise if a 2.5kg hare was being pursued by a 25kg labradoodle over a loch covered with ice of unknown thickness. I wasn't keen on the potential results, so despite the inconvenience of pulling two distracted dugs up the steep snowy rise (and it was annoyingly fragile, deepish snow, tbh) that leads away from the Loch, it was definitely the better option.

Once you negotiate that bit though, and sort of realise that you've gone too far in the direction of Macdui, and do a wee bit of a U turn, and once Derry Cairngorm appears right in front of you...then all your worries are over! Indeed you can see Molly prostrating herself at the sight of it here: 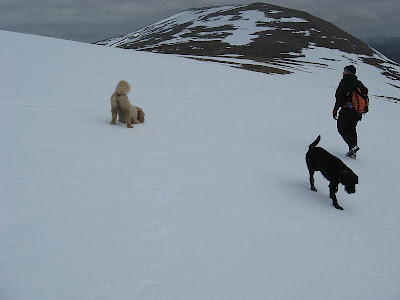 Whereas the Wee Black Dug is off in the opposite direction, looking for biscuits.

Which meant Molly wanted a biscuit. So she tried Paul with one of her winning smiles. 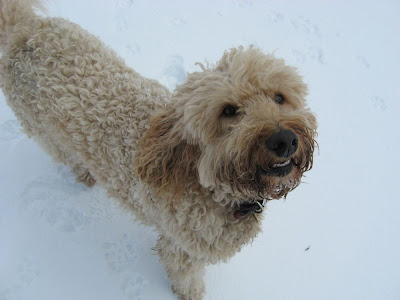 Or maybe she was just smiling for the camera. Either way, it's a touch unsettling. ;0)

In truth, once you're at that point then the rest of the walk is pretty much effortless. It's still a long way from home mind, but you're in a remarkable location. The hulking, blocky mass of Coire Sputan Dearg just kind of lurks over to your right. We were probably about a mile away from the thing but my vertigo was whispering in my ear, asking me whit I'd feel like if I was standing on the edge of it, so that tells you it's kinda big and steep. ;) 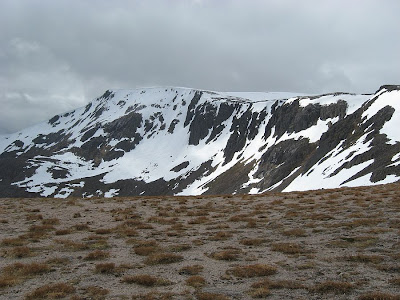 Anyway, as I said, it's no more than a bouldery stroll from there to the summit of Derry Cairngorm. I know I've acknowledged that these are Paul's photies already, but I'm awful grateful for this next one. The dugs aren't often both out on a Munro at the same time. And he's got them bang on. 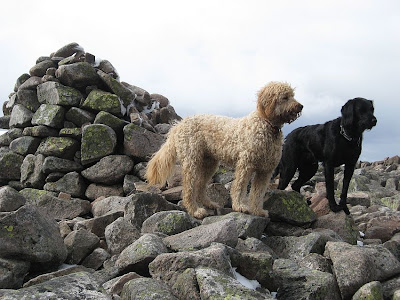 It's downhill all the way from there.

You wander south towards Carn Crom, keeping an eye on the weather, because although you and your dugs might be sweating bullets in the sunshine it looks like the rest of the Highlands is in the grip of some sort of Perfect Storm. 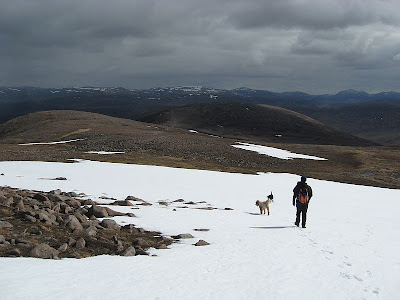 Once you're on the approach to Carn Crom you have a smashing view of the latter part of your earlier yomp up Glen Derry... 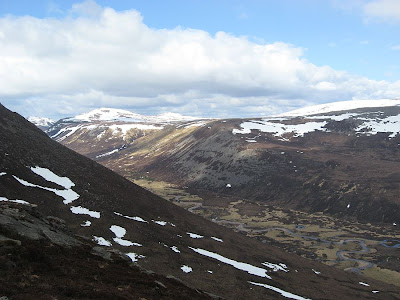 And your forthcoming treat involving a walk up back up Glen Lui towards Linn of Dee...


But in fairness, once you get down to the vicinity of Derry Lodge and sit on the big fallen tree next to the MRT hut; take five to enjoy your last sandwich, and soak up the reappearance of the sun...it's not a trudge at all.

Particularly if you're a Wee Black Dug and you find another really big stick - but this time you've got a pal to lighten the load. 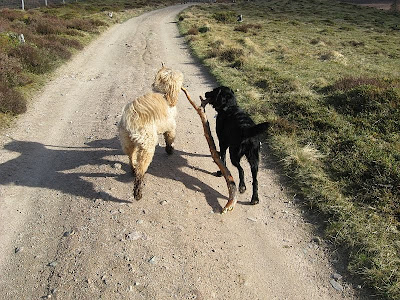