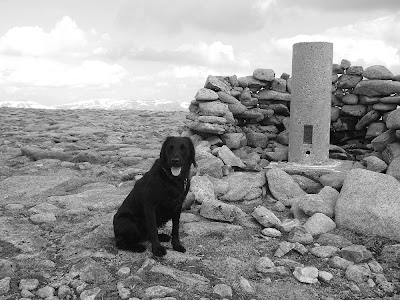 From Robin Howie's "Walk on the Wild Side" column in the Scotsman:

"Beinn Bhrotain lies in the southern Cairngorms, west of Braemar and hence is a good viewpoint from which to admire the more dramatic mountains to the north. It is a hill of legend, of Gaelic fable and matters Munro.

It is associated with the Fingalians, the followers of Finn MacCool, for the name means hill of Brodan, their jet-black hound that chased the white fairy deer. Apart from hunting, there is a high corrie of Glen Geusachan called Coire Cath nam Fionn, corrie of the battle of the Fingalians. More recently, Beinn Bhrotain is linked to Hugh Munro, or rather the connection refers to its subsidiary top, Carn Cloich-mhuilinn. That hill had been a Munro from the time of the first tables, but was demoted in 1981 for having an insufficient ascent from Beinn Bhrotain. No other Munro is better known for its subsidiary top. Carn Cloich-mhuilinn is the one that got away, for Hugh Munro had been keeping this for the last one, but he died without completing the Munros and tops."

A jet-black hound, eh? It sounded like an omen, especially because me and Andy have a jet-black hound each. Or maybe it was the 90% cloud free Munro prediction for last Saturday on MWIS that made us decide that if you're going to do a longish walk to a remote hill you might as well do it when the days are long and the sun is supposed to be shining.

It seems that traditionally everyone does Monadh Mor on the same trip, given the extent of the walk-in, but we didn't bother. The reasoning was twofold. First, Robin Howie says that it adds about 2 hours onto the day, and we both thought that might turn a good long walk into a bit of an endurance test. Second, I've got a notion that MM would make quite a good camping expedition from Auchlean, so there's no harm in leaving it for another day.

We were soon striding along the track to White Bridge. There were a lot of folk coming in the opposite direction. A lot of folk. And they all had beards. All of them. A moment's pause for reflection led me to the conclusion that me and Andy were effectively doing a wee bit of the TGO Challenge the wrong way round. The Challengers - as I must, accordingly, describe them - all seemed relatively cheery right enough, despite the beards. And the limps, which most of them also seemed to have. Understandably, I suppose, given what they're engaged in.

It takes about an hour to reach White Bridge. 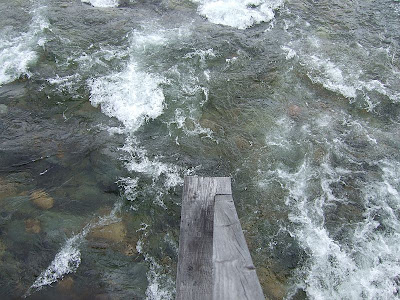 Cross over and then it's a sharp right turn following a good track alongside the River Dee. That's a fantastic body of water. 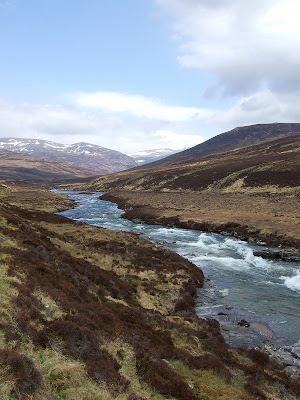 Fast, wide, crystal clear and no doubt hoaching with salmon in some of the pools that you pass on the way. And not a soul doing a wee bit of poaching. If Oor Wullie was deid, he'd be turning in his grave.

Apparently the track was rebuilt in recent years, and is designed not to encourage mountain bikers. Certainly, it'd be a bit of a nightmare negotiating the wide drainage channels that appear at regular intervals, and I doubt the time saving would be all that great for that section.

The Devil's Point looms ahead of you, popping in and out of view as you follow the twists in the river. You eventually pass a patch of partly cleared forest on the left, a wee burn crosses the path and then a cairn marks the spot where you start heading up through the heather making for the Munro itself. 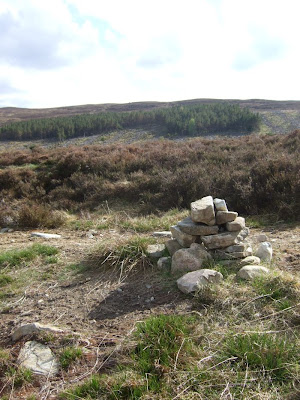 There is a path of sorts, which takes a pretty easy line, climbing very gradually, but once we got a bit higher we could see a more defined track leading over from the small tops nearer the glen, and that might have been a better option. Either way, it's an enjoyable way of getting up, and the views keep opening out the higher you get. Here's what you see looking back down towards the river - the grassy expanse marked as Chest of Dee on the map is in the middle, on the extreme right, just where the river curves off to the left at White Bridge itself. I'm also thinking the snowy hills on the horizon are the Lochnagar Munros : 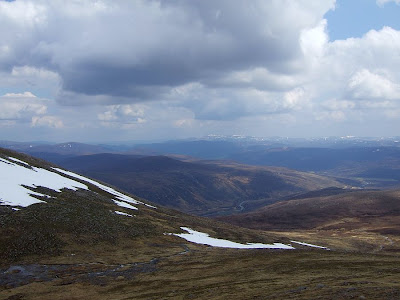 Looking south, towards a hill that seems to me to be roughly where Beinn a Ghlo ought to be: 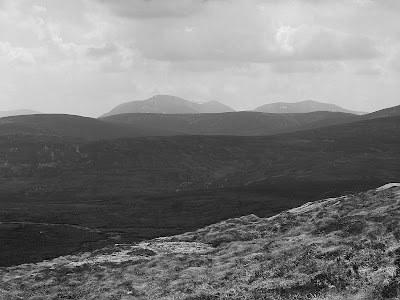 It doesn't seem to save a great deal of ascent if you miss out the summit of Carn Cloich-mhuilinn, so we decided to pay it a visit. You get your first proper views of the summit of Beinn Bhrotain from there. My photie didn't turn out but if you're ever there, it's the one on the far left. ;0)

Again there's an obvious path that leads down from that top, but it peters out quite suddenly and you're in the midst of a flat, boggy expanse. It's just a case of picking the easiest line towards the higher ground, but I have to say that I think this would be a serious navigational challenge in poor weather. Even with perfect visibility you felt yourself having to regularly fine tune the direction you were walking in, just because you could sense you were wandering away from the line that would take you to the summit. You were still gaining height, but it'd be easy to sort of walk over the broad shoulders of this hill, and miss the top altogether unless you could see the objective.

This was the best place to get a proper look at Carn Cloich-mhuilinn, which is actually a handsome hill in its own right: 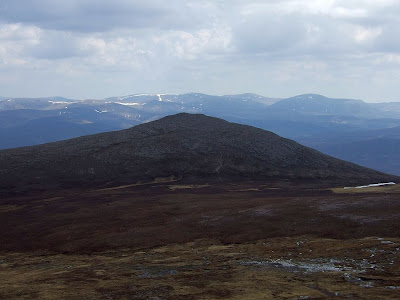 From there, another ten minutes or so of not terribly steep walking brings you to the rolling summit plateau, and once you're up the views aren't half bad. Plus you get a nice wee selection of cairns, shelters and trig point stone circles. 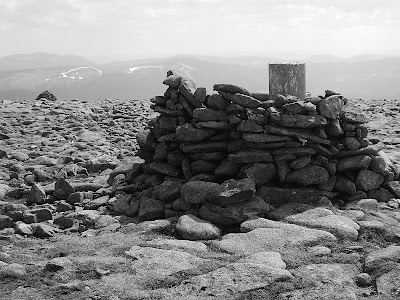 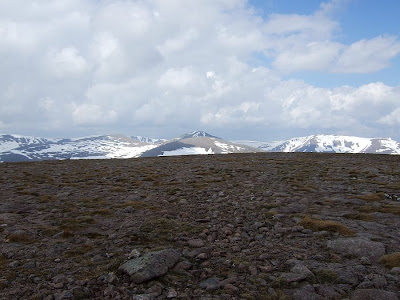 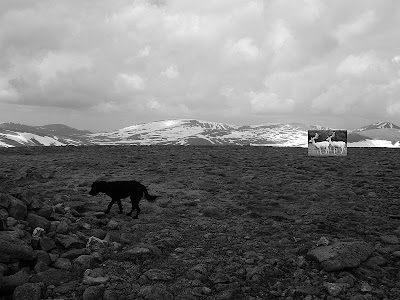 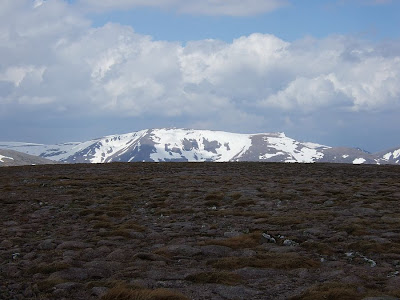 We were joined by a pair of snow buntings, scrounging for crumbs, but they didn't get close enough for a photie unfortunately. Wary of the dugs, no doubt - vicious beasts that they are. 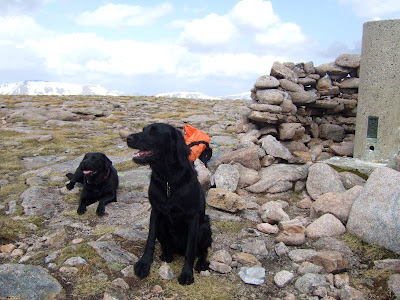 The easiest way down looked to be to follow the line of the burn that falls all the way back to the floor of the glen. On the way, you get a decent view of the well named Coire an t-Sneachda. 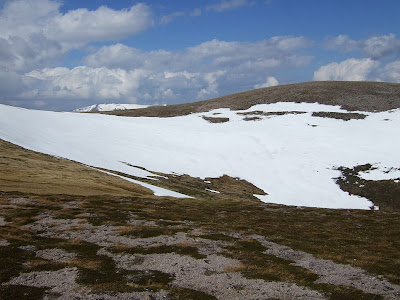 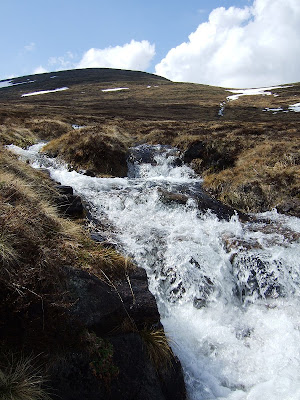 The only drawback with our chosen descent route was the depth of the heather, and hidden boggy patches which made the going fairly tough. Progress was steady though and we eventually regained the original path, albeit a good bit further along the glen from where we had left it on the way up.

Nice view back the way to the Devil's Point. 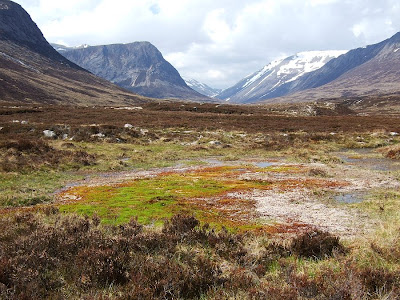 From there it was probably 45 minutes to White Bridge, and then the familiar hour back to the car. The carpark was still heaving - I suspect Bob Scott's and Corrour bothies would both have been a tad cramped on Saturday night.

I always tend to think the journey to the Gorms takes longer than it actually does. I looked at my watch when Andy nipped into the wee store in Braemar on the way back and it was seven pm. When we turned onto the Airdrie road at the Auchenkilns roundabout, it was ten past nine. That's really no' bad going.