I was out of bed at 6 on Saturday morning, having packed the rucksack the night before, all ready for a sojourn back to Laggan and an attempt at Beinn a Chlachair. As soon as I stood up though, I discovered that my left foot had developed a mysterious stabbing pain during the night. It was as if someone had thumped me on the sole of my foot - at least I imagine that's what such a thing would feel like. I can't recall it ever happening to me, thankfully. Nevertheless, 10 minutes stomping around the house with no sign of improvement led me to the view that driving for two and a half hours and then attempting a 7 hour walk wasn't necessarily the best plan. My feet are usually one of the few bits of me that don't suffer from too many ailments, so that was another reason why a return to bed for an hour or so to ponder a revised objective for a walk had a certain appeal.

In circumstances such as those, to avoid having to think too hard, I generally go to the Kilsyth hills and wander up Meikle Bin. It's pretty much a default setting as long as I'm not too hungover to get out the house in the first place. And I'm currently aff the drink, so that was that. An hour and a quarter up, an hour to get down, misty rain, wet dugs and a fierce breeze at the top. For once I decided to stick my camera in the rucksack, so there's even proof that I went outside, sair fit or no'. ;0)
The start of the walk, or at least the route I aye take is at the carparking area just beyond the dam at the west end of Carron Valley Reservoir, opposite the entrance to Todholes farm. Or maybe it's now known as Todholes windfarm, seeing as how that's what appears to be its main crop. Follow the forestry track broadly south, as it meanders through the trees, with the reservoir generally hidden down to your left. You ignore two tracks that branch off to the right, and eventually you reach a wee concrete bridge that passes over the River Carron just before it flows into the reservoir. Let your dugs have a splash about in the water here, if you've brought them and they're not wet enough already. Mine were. Just a hundred yards or so beyond the bridge the path splits, and you take the right hand fork which starts to climb very gently south west. There's trees on both sides of the path for most of the way, but before long it opens out a wee bit and if the rain stops for five minutes you'll get a quick glimpse of your objective: 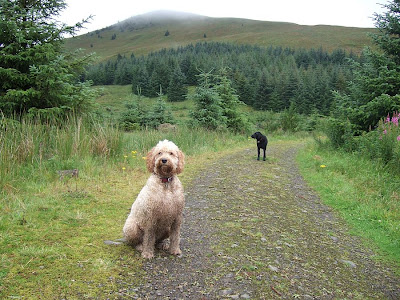 A shade higher up and there's a view back to the reservoir, with the aforementioned windfarm in the distance: 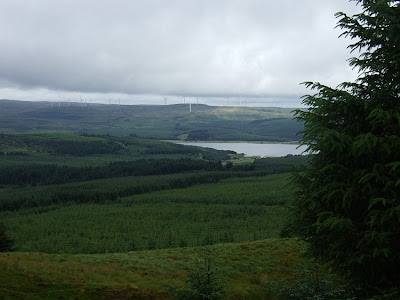 The trees close in again... 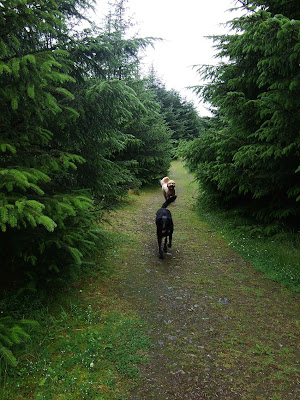 ...just before the small cairn/pile of rubble that marks the left turn off the forestry path and onto the hillside proper. The dugs used this exciting stage in the journey to start chasing each other like daft puppies: 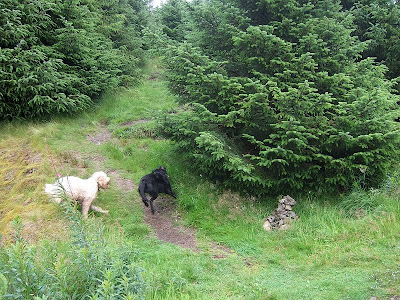 Once you get through the uber-boggy section between the trees just after that, you see a rather lonesome wee pine, which by virtue of its exposed position is, as my mother would say, "all to the one side like Gourock": 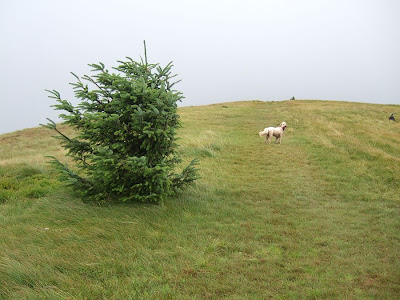 It's probably only about 15 minutes from there to the top, but it's 15 steepish minutes which after the preceding leisurely stroll never fails to get me peching extravagantly. Still - it makes the whole thing feel like its proper exercise.

I like both these photies of the dugs at the trig point. I appreciate that they're pretty much identical, but still. 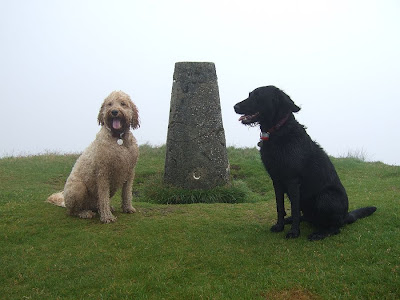 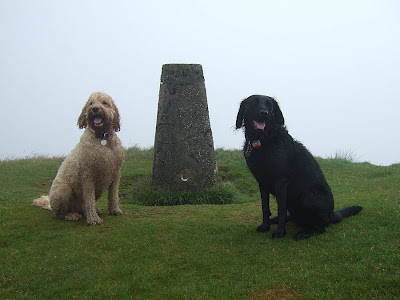 
This of course is where the "closeup" for the last post was taken. Not that it was the only closeup. She really is an incorrigible poser. 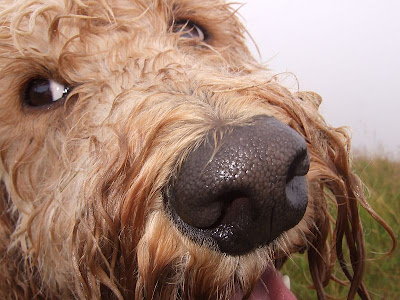 If the weather had been better I was going to continue south over the summit and then wander anticlockwise over forestry paths marked on the map till I rejoined the outward route but it was a trifle dampish for that. So it was back the way I came, and pausing only to get some colourful pine cone photies... 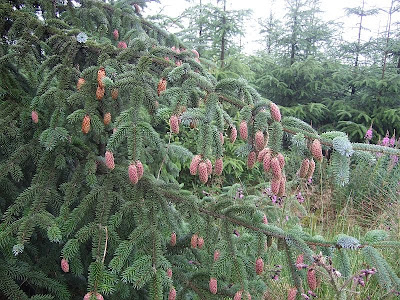 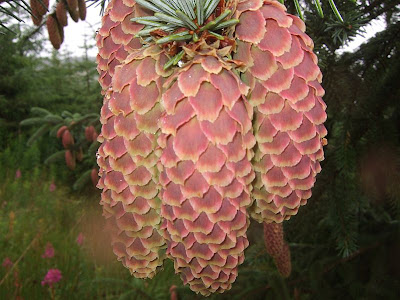 ...I was back at the car at lunchtime.

This sobriety certainly lets you use the majority of the daylight hours. ;0)

Oh, and my foot was complaining a bit, but it disny seem to be life threatening. Result.