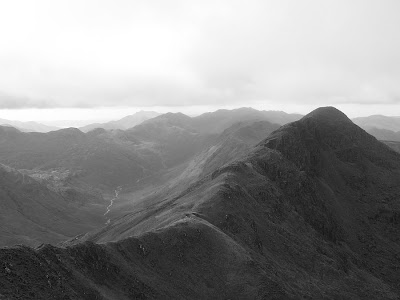 The thing about the Glen Shiel trip was that there's loads and loads of photies all over t'internet showing all the same views and they're invariably a lot better than mine! Still, this selection from the second half of the ridge gives a wee flavour of what it was like.


In passing, the ridge was fine from a narrowness/exposed/scrambly point of view, even for a notorious big girls's blouse like myself. The one properly narrow bit has a straighforward bypass path, and the descent from Aonach air Chrith, mentioned as a wee bit awkward in a couple of the descriptions I read was just a short rocky clamber down the way. Not high, and not exposed. The bit that foxed us - all of us - was at the end of the ridge. When we left the summit of Creag nan Damh, expecting to follow a drystone dyke along to a bealach as per the recommended route, we saw what looked like a vertical chimney-type thing up a 30-odd foot high section of rock. It was unexpected, and quite simply didn't look right. The path led straight to the foot of it though. Maybe the fact that there were a couple of folk in the middle of the chimney, struggling a bit to get up it made it look more awkward than it really was, but none of us fancied the look of it, and as there was no obvious way round it, we decided to head downwards via the steep grassy rake that leads you sort of NNE from the wee bealach just beyond the summit. Suffice it to say that was probably a mistake - steep, slippery, wet and no' really the right direction, as you have to make a big detour at a point where the wee burn you're following becones a rather dodgy waterfall. Oh, and you end up on the wrong side of the burn when you eventually regain sight of the proper path, and it's a wet endeavour getting across it at the end of a long day!

Still, that wee gripe apart it was a fantastic walk. And awfy nice to be heading ten minutes up the road to a hotel for the night as opposed to a five hour drive home in the dark. That's the way to do it.