Travails with my dug

Quiet on here for a number of reasons. One of them is that the hillwalks have been the entire impetus for posting recently and I wasn't out last weekend; another is that I've been having a rethink about the structure of the blog (with a view to motivating myself to get a genuinely regular posting routine going); and the main one is that the Wee Black Dug's been enjoying less than perfect health since we got back our holidays.
Nothing sinister, but - and at risk of offending her delicate sensibilities by broadcasting personal information on the internet - she's been having episodes of incontinence. It started just before the end of our week in Ardnamurchan; indeed that was the main reason we came home on the Saturday rather than the Sunday when the let was finishing. Very odd, in that she'd been fast asleep on the kitchen floor of the house, and when she'd woken up and changed position, as dugs are wont to do, she'd left a small puddle behind. We kind of thought it was just a bizarre one-off, but kept a very close eye on her and it happened again the next morning. It wasn't that she was struggling with her waterworks when she intended to go: you'd never have known there was a problem from looking at her when she was awake, it was simply good old fashioned sleeptime bed wetting.

Needless to say we were straight down to the vets on our return with the detailed history. The first positive was that we knew it wasn't that she was wetting because of stress, or anxiety, or as a result of getting left too long in the house. That saved a bit of time. Genuine incontinence - ie when the animal doesn't know that she's lost control - is something that they can treat, rather than having to isolate a cause for it first. Admittedly it's an unusual condition in a dog as young as Jorja, but it's not uncommon in neutered bitches a few years older than her, and our vet had come across a couple of cases in dugs of a similar age.

So she was put onto Incurin tablets, which the vet said was one of two possible medications that they would try. It's a hit & miss approach to dosage with that one. It's not based on the size or weight or age of the dug. You start off with one pill a day and if that works you reduce it to half a day and if it doesn't you increase it to two a day etc, etc, till you find the minimum effective dose. Largely irrelevant in our case because it wasn't making a blind bit of difference to Jorja, no matter how many we were stuffing down her neck.

The return trip to the vet resulted in a prescription for Propalin, which we were told worked in pretty much the opposite way (or on different types of muscle, at least) to the first drug. Incidentally, if anyone's been having difficulty following the nature of  the WBD's problems, that link has an impressive representative graphic.
;0)

Anyhoo, the Propalin dose goes by body weight - 25kg - and since last Friday she's been getting three 0.5ml shots of it each day. The bad news is that it tastes so vile that even Jorja is spitting out the food that we initially tried to hide it in. The good news is that since she started taking it she hasn't had any more accidents, so fingers are duly crossed.

The problem has necessitated a (hopefully interim) reorganisation of the sleeping arrangements, for much as I love her it's not fair to have an incontinent dog continuing to share your bed. She needed to be confined somewhere in the house with a tiled floor, for ease of cleanup operations. She simply wouldn't settle in the kitchen at night, even with Molly to keep her company, so the short term solution has been that we stick her in the wee ensuite in our bedroom. I feel a terrible heel each night shutting the door on her, but it means we all get a bit of sleep, which wasn't the case when she was downstairs. If she gets through another few days I reckon we can think about getting things back to normal.

And just to add to her woes, the day after she started on the Propalin she got a recurrence of her limber tail/broken tail syndrome which meant she couldn't wag it, or even sit down too fast(!) without causing herself significant discomfort. So all in all the poor wee thing's been through the mill a bit.

She must be feeling slightly better within herself though because today she formed a view that she could probably chew her way through an unopened tin of cat food which had been carelessly left in a kitchen cupboard. I'm not quite sure why she gave up when she did, because success didn't look to be that far away: 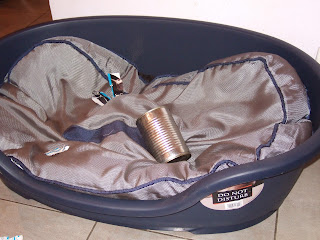 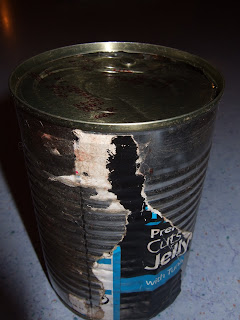 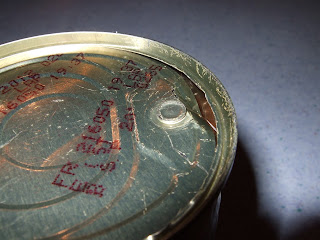 Certainly, her unfortunate ailments aren't affecting her wholehearted pursuit of anything edible.