Having more than a passing interest in the weather, given my occasional forays up hills, I've decided on balance that it's worthwhile recording for my own future reference that I've never seen snow like this in darkest Lanarkshire - certainly not in the last twenty five years. When I left Skye in 1983, to move to my first "qualified" job, I was due to start work in Glasgow just after the New Year, and there was such a dump of snow that I missed my first week altogether, travel being impossible, but I still reckon this is more widespread & causing more disruption.

Bellshill is bad enough. I think we've had about 15" of snowfall since last Friday, but when I ventured up to see my mother today, it being her 73rd birthday - Happy Birthday Martha!!! - I was genuinely astonished about the state of the area outside the town centre. The main route between the Stirling road and the wee housing estate where my mother lives is a big, busy route and today it's like some stockpile facility for cars that have been killed by excessive snowfall. There can't be a household in any of the sprawling schemes in the vicinity that hasn't chosen to abandon its motors out on the main roads rather than chancing getting them anywhere near a gritted thoroughfare each morning. This creates enormous havoc, needless to say; a half mile section of what is now effectively a single track, ungritted because the lorries can't negotiate past the cars, on a steep slope which joins a fast moving main road via a blind T-junction. Just down from a primary school.

The stolid citizens who live in the street parallel to my mum's had clearly been engaging in a collective shovelling extravaganza, because the Subaru was revelling in a pretty good grip as I took it up Tummel Drive, albeit through a narrow gap between towering banks of snow. That kind of gave me a false sense of confidence, because as soon as I rounded the bend at the top, it was as if I had teleported to the Yukon. About 4 foot of snow, just...well...completely blocking the road. Eight years I've had that car, and this is the first time it's ever actually been defeated. Bearing in mind I was only about 10 yards from my mother's hoose, I tried to press on a wee bit. Suffice it to say that I was inordinately pleased that I'd stuck my wee mountain snow shovel into the motor at the start of the week.

Eventually I managed to reverse along my own tyre tracks, and head back down Tummel. Whereupon I espied Martha walking up the hill, she having earlier decided she'd wander over to the shops a mile or so away because she was about to be reduced to using UHT milk. Well, if you want proper milk on your 73rd birthday, you shouldn't settle for anything else. ;0)

So it was that rather than the original plan to treat her to a nice slap up meal in a posh restaurant tonight, I was reduced to giving my mum her presents when she climbed into the passenger seat of the Forester for five minutes. And yes, I could have abandoned the car and wandered up to the house with her, but (a) there was nowhere within about a mile that I could have found a space to leave it, and (b) Martha wasn't having it anyway, because I was supposed to be at my work.

Thankfully the gifts went down well.

In all events, Airdrie's worse than Bellshill. It's higher up of course - hence the post title - and "worse than Bellshill" at the minute connotes a lot of snow. I'm putting a couple of photies up here to show what it's presently like around the house - so I can compare the conditions next year! 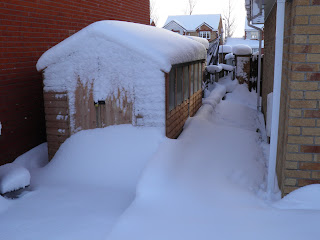 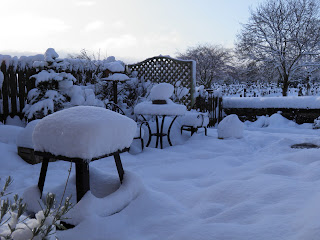 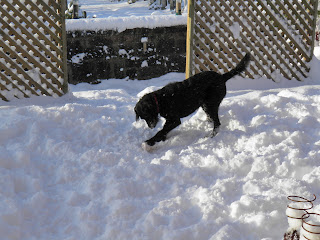 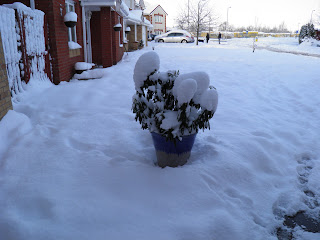 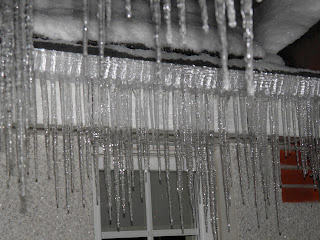 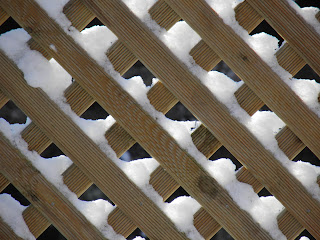