When I did a winter skills course a few years back, one of the things that kind of stuck with me was the comment that the instructor signed off with, to the effect that the one thing you simply shouldn't go without when heading into the hills in winter was a snow shovel. If you had that, he reasoned, you could pretty much fashion a life saving sheltery affair, regardless of what else you had in your pack.

I was sufficiently impressed that I immediately ran out and bought just such an item - one not unlike this, in fact.

Needless to say, I never bothered my tail taking it with me, because it was...well...a shovel. And it looked a bit daft. And we didn't really have all that much snow up until two winters ago, etc, etc.

There was always a nagging feeling that he was probably right though, and the nagging became even more insistent after yon Glenshee trip. So, only about three years after they were all the rage, I decided that £17.50 was worth a punt if it meant a better chance of surviving a hillwalk without perishing, and sent away for a Snowclaw from the good folks at Furtech.

Now, this isn't a review, because I didn't use it for digging (!), but I took it with me last Saturday, and I can tell you that (a) it makes a fantastic seat for summit breaks, (b) if I put a couple of cords on it it'd make a serviceable minisledge for snowy descents, and (c) most important of all, Jorja thinks it's a big frisbee, taken up the hills specially to entertain her. If I'm honest I never noticed the resemblance until she started going nuts when I took it off the back of my rucksack, but the dug definitely had a point.

No photies out on the hill, but here's a few of it relaxing in the kitchen. 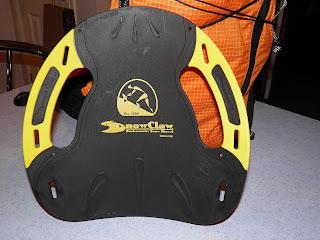 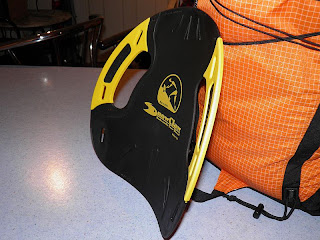 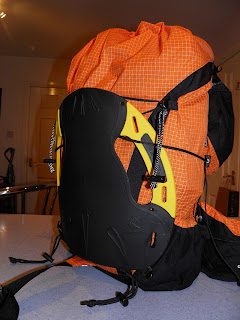 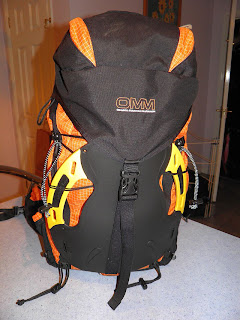 It's the first genuine use I've found for that normally redundant "Naase cord" on the back of the Jirishanca. Plus, as an added bonus, the snowclaw also fits perfectly inside the pack, and the natural curve on it gives a decent bit of structure/reinforcement. Even if Jorja hadn't approved, I think I'd have decided to keep taking it in future.