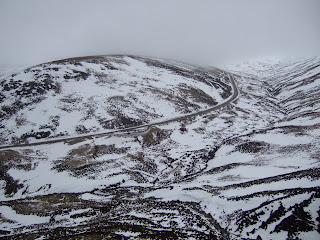 I say dignified; it was more weary, sheepish and tinged with nervousness until the road hove back into sight while there was still a touch of daylight.

Me & Andy had decided very late in the day that we'd use yesterday to get up a hill - any hill - before the end of the New Year break. The forecast was less than inspiring, including words such as "gales", "snow" and "buffeting", but the die was cast and we set off for Glenshee regardless. Sitting in the Defender at the car park south of the Devil's Elbow we had a five minute discussion, during which we were both trying to talk each other into heading off to Braemar for bacon rolls and pots of tea rather than walking up a hill. We were both trying to appear as if this wasn't what we were doing, of course, so that it'd be the other guy's fault for calling the walk off.
;0)

Common sense failed to prevail however, and we were soon splashing across the burn to the north of Meall Gorm, en route to the day's targets of  Creag Leacach and Glas Maol. There wasn't a huge amount of snow at this stage, and we gained height reasonably rapidly, taking our lack of fitness into account.

The A93 looks like a rollercoaster from this vantage point (see photie above), and it was busy with cars heading up to the Ski Centre.

It was only once we got over Meall Gorm and started heading south east to the slopes of Creag Leacach that the weather really began to exert its influence. Bitterly - beyond bitterly - cold in the wind when it gusted, and progress was slow on the ascent. It was just feasible to do without crampons here, using a combination of ice axes, step kicking and the fact that there were areas where boulders sticking through the snow gave you a bit of extra purchase, but if the slope had been any steeper, or a touch more solid, the jaggy boots would have been pressed into service. The layoff since the last trip was telling already, particularly with the extra effort that walking on snow requires, and it took us about two & a half hours to reach the first summit. 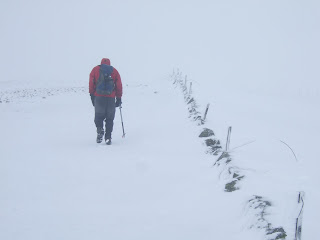 It was about now that things started to go wee bit awry.

Firstly, we never discussed the prospect of just doing the one hill and heading back down. Given it wasn't that far away from 1pm by then we should at least have realised that progress thus far having been so slow, lack of daylight might become an issue. Secondly the weather promptly started to deteriorate. Thirdly the weather continued to deteriorate, and fourthly it suddenly got much worse.

By this time we had managed to follow the drystone wall about two thirds of the way between Creag Leacach and Glas Maol. Visibility was, well, it's hard to be sure in a whiteout on a featureless plateau, but my honest estimate is 6 to 8 feet. We took a bearing from the cairn to the summit of the second hill and set off. Eventually, after a couple of pauses to double check the bearing (we had a compass bubble issue!), the GPS was telling us we were pretty much at it - but then again the GPS was sometimes struggling to give an accuracy of better than 40 metres, and the best it could claim all day was 6 metres. Even 6 metres of course, isn't necessarily good enough, when you can only see 2 metres in front of you.

Still - we were there or thereabouts. We were sensible enough to realise that wandering blindly around for half an hour looking for a cairn that had to be within about 100 square metres of us, but which wished to remain hidden was (a) pointless, and (b) tempting fate, especially because the weather had now decided to stop pissing about and really get unpleasant. Wisely and decisively we elected to head immediately for our intended exit route via Meall Odhar to the north west.

We found some sections that felt (rather than looked, because you could only see for about 4 feet now) simply precipitous. Snow slopes that just...dropped away. Semi-blind sweeps to the left and right failed to come up with anything that seemed preferable. The terrain on the map showed it was steep, right enough, but if you hit the right bit of the steep stuff it was doable. Given the conditions, it would have been pure luck as to whether we'd hit said bit or not, and I don't mind admitting that the psychological element of blindly shuffling down an extraordinarily steep icy slope in crampons was getting to me somewhat.

We retreated up the way, to pause and consuder. I think it was at this point that we noticed a small item zooming off uncontrollably down the hill, and realised it was the OS map, dropped during a glove change.

We had a spare, fortunately. Indeed, I can't stress enough that it was A Good Thing That We Had A Spare Map. Yesterday would not have turned out well had we been rendered mapless.

The question then was whether to try a more northerly foray to try and pick up the top ski tow, and follow it down, or whether to try and retrace our outward route. I'll cheerfully admit that even although the route to that tow looks a lot less steep on the map (the Spare Map, remember kids!) than the route to Meall Odhar, my vote was firmly pledged to the "back the way we came" option. In fairness, that was largely based on my experience during a descent from Cairngorm a few years back when as a result of some hidden magnets (seriously) in my companion's gloves, we had mutual compass reliability issues and were unable to find the ski tows/chairlifts/funicular railway in a whiteout.

In the event, my chickening out of any further onwards progress meant following the compass back to the wall that had guided us from Creag Leacach. I would honestly swear that we were going round in a big circle during this section, but the bearing never wavered and I never took my eyes off it, so that was purely another example of the disorientation the whiteout conditions were causing. Remarkable, altogether. My enthusiasm for returning via our outward route evaporated somewhat when I realised how much fecking ascent it was adding, but for the second time in one day the die had been cast. We had estimated we would be lucky to get to the Top at 943m beyond Creag Leacach before daylight faded altogether, but that was the one thing that went in our favour - it really didn't get dark properly until almost five, which meant that while crampons were essential for the descent from there, headtorches weren't. We didn't need them until we were about half an hour from the car. Can I just say at this juncture that spare headtorches are also A Good Thing?
;0)

From that point, as there was a break in the mist, the A93 became visible again, and we could pick out a route to traverse north east shoulder of Meall Gorm to rejoin our initial ascent path. We could also see the headlights on the cars coming down the Devil's Elbow so we kind of knew even our navigation should be able to get us back to the Defender from there.

The other odd thing about today? For the first time ever - ever - I'm paranoid about this - I had somehow  forgotten to leave Marion a note of where we were and what hills we were doing. So Glenshee; whiteout at 1068 metres; OS map sliding down a hill; shortage of daylight...and nobody had any idea where we were.