I thought it was worth mentioning for anybody of the winter early morning dug walking fraternity that I've come across what's proved so far to be a rather robust collar-attachable light.

The odd thing about the search for such an item is that for the first couple of years I had the dogs, the Ruffwear Beacon was the very dab. It survived dunkings in the Clyde; getting pulled into its constituent parts by clumsy wire fence crossings; freezing/snowy conditions, and countless days out in the rain. You just put it back together, or left it on a radiator for a couple of hours and it fired up again the next day. When we eventually lost it altogether in impenetrable undergrowth following a (thankfully hopeless) deer chase incident, I automatically assumed that as soon as the replacement arrived everything would continue as efficiently as before. Indeed, I ordered two of them, such was my confidence.

Nah. The slightest hint of wet weather, and both the new ones either flash randomly and grudgingly, or become impossible to turn off without taking the battery out altogether. Strange. And at £15 or so a pop, it's not ideal.

Which brings me back to the original point of the post. Tesco bikelights, one in red and one in white/clear (you know what I mean) with handy wee elastic loops which fit onto dug collars like they were purpose built. Despite Jorja's best efforts over the last three weeks she hasn't managed to test them to the point of destruction yet, so I've got high hopes for their longevity.

Here's a photie, in case you can't visualise what a wee red light with a cord looks like: 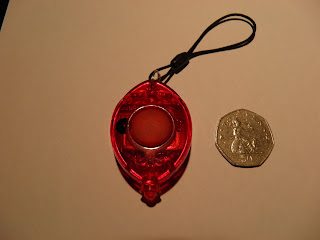