As I had said, I had a week off work just there and was hopeful of getting something done out of doors. Something a bit more ambitious than seasonal pruning and garden tidying, at any rate.

As things turned out though, there was a new and exciting reason to spoil the plans every time I had a go. I'd sort of persuaded myself on Tuesday evening that it'd be exciting to head up to Glen Shiel the next day, walk up one two or even three Munros, spring for a night in the Cluanie Inn for me and the WBD, then a leisurely drive home on the Thursday. For the first time I can remember, it wasn't the weather forecast that changed my mind about that, but rather the avalanche forecast. As soon as I read it, the game was, as they say, a bogey.

So, fallback plan for Thursday (which promised half decent weather) was to drive to Crianlarich, catch the train from there at about 10:20am and journey onwards to Corrour with a view to having a go at Beinn na Lap. Even if there was a lot of snow about, I reckoned that with almost 8 hours to play with before the train back down, I shouldn't have any problems with the Munro, which is only supposed to take about 4 hours in itself. Leaving Bellshill at 7:45 gave me ample time to get to Crianlarich...or it would have done, had there not been a smash on the Cumbernauld road (which is down to one lane because of roadworks anyway); water repair work-related gridlock going on in Chapelhall (which route would have enabled me to avoid the smash) and, it transpired when in a last desperate roll of the dice I decided to head East, hoping to join the M9 further north, an hour and a half tailback on the M8 itself.

If there was one positive about the situation, it was that I knew by 9 o'clock that I wasn't going to make the train, so it's not as if I had to drive very far. Jorja was a bit miffed right enough, jumping out of the car after two hours only to find herself at her own front door.

I had hoped to have another bash at Beinn na Lap on the Friday, but the MWIS prediction of heavy snow and a windchill of minus 17 took the shine off the prospect, and I decided just to wait until the Saturday and get back to the non-holiday hillwalking routine.

That nearly worked. Me & Andy headed up to Glen Etive, the objective being Meall nan Eun. Chosen carefully it was - the SAIS folk were confident that approaching a hill from our intended direction was about as avalanche safe as you could get. We made pretty good time on the road up, saw a golden eagle soaring high above the glen en route, met Glen Etive's notoriously tame, traffic stopping deer... 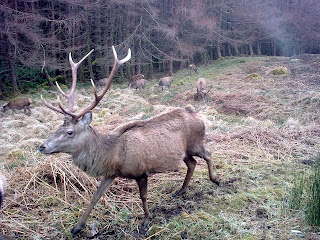 ...and then had a very pleasant walk up Glen Ceitlin. There wasn't anywhere near as much snow around as we had anticipated - lower down at least. Pretty much as soon as we got above 1200 feet or so however there was more than enough of the stuff. Waist deep on occasions, and the terrain fairly quickly started to get the better of us. We could see the route up, which is a fairly steep corrie headwall clamber, and it was clear that (a) there was too much snow in it to make it feasible, and (b) there was no safe bypass route - certainly not one that wouldn't have involved an impracticably lengthy diversion. Still, we've reconnoitred the route now and in common with many other hills I've attempted recently I'll be able to go back in the summer and get to the top of the thing. Probably.

Ach, it was just good to get out anywhere. And it meant I got to test my brand new boots. Ah, the joy of dry feet on the hill.