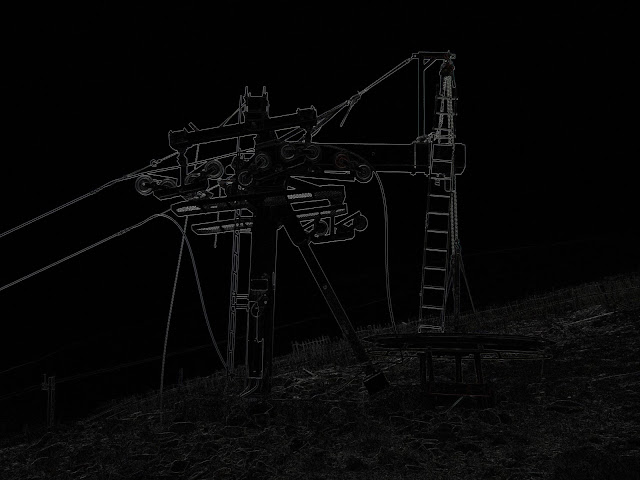 Just prior to all the cardiovascular brouhaha kicking off, me and Andy had actually managed another day out on the hill, continuing what had, until muggins here started malingering, been a reasonably successful few walking weekends in a row.

Our plan on 24th September- such as it was - had been to head to Spean Bridge and then to Corriechollie farm with a view to having a go at Stob Ban in the Grey Corries. It was one of those drives north though that was characterised by two slightly hungover chaps gently veering towards talking each other out of a hillwalk, based not only on reasons of lack of peak physical conditioning, but also a pretty downbeat weather forecast, which had promised  "considerable buffeting", together with increasingly wet conditions as the day wore on. I'm not saying we had definitely decided that the lure of the gear shops in Fort William was going to win out, but when the idea was mooted that rather than a 14 mile trek to pick off one new hill, we could investigate the delights of the mechanical assistance available at the Nevis Range and get up Munros number 6 and 7 while walking for about 6 miles...well, what are you to do?

Now the purists amongst you might beg to differ, but as far as I'm concerned, if there's an energy-efficient way to get to the top of some of Scotland's biggest hills then I'm likely to embrace it unreservedly. Plus it was a bit drizzly by that point.
:0)

It's £11 for the trip on the gondola, which is a bit steep, but which is also a lot less steep than actually climbing Aonach Mor from the car park. (See what I did there?)

I enjoyed the gondola. It certainly felt a safer option than the last time I made use of ski-related equipment.

We followed the route in Ralph Storer's book (predictably!) which points you to the track that runs across from the gondola station to the marked viewpoint of Meall Beag. 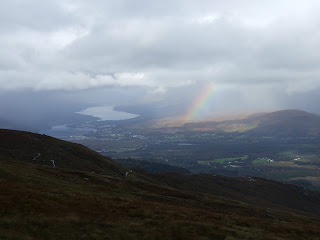 From there it's a case of picking a line upwards, keeping the ski tows and stuff to the left. In summer you could actually just head straight up next to the tows, but I'm not sure, having come down that way, whether the underfoot conditions would be any less squelchingly slippy.

There was always some winter sports-related stuff to look at until we reached Aonach Mor's summit plateau - although I'm not claiming that it was consistently photogenic. There were some slightly unexpected cliffy drops just after the last of the ski tow stuff... 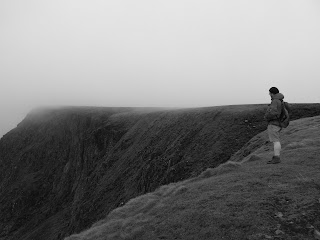 ...but the plateau itself is wide, level and offers enjoyable walking, even if the promised buffeting was now coming to fruition. The weather was thinking about closing in as we wandered on, but stayed away long enough to allow glimpses of  Carn Mor Dearg etc over to the right. The summit cairn sits about 100m back from the cliffs on the left. 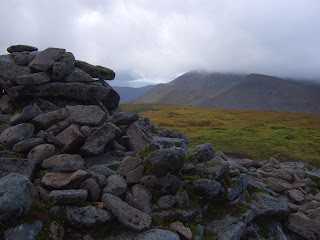 There's more of a path to follow from here, and the added bonus is that there really isn't much of a drop to the bealach between the two hills. Atmospheric weather by now! 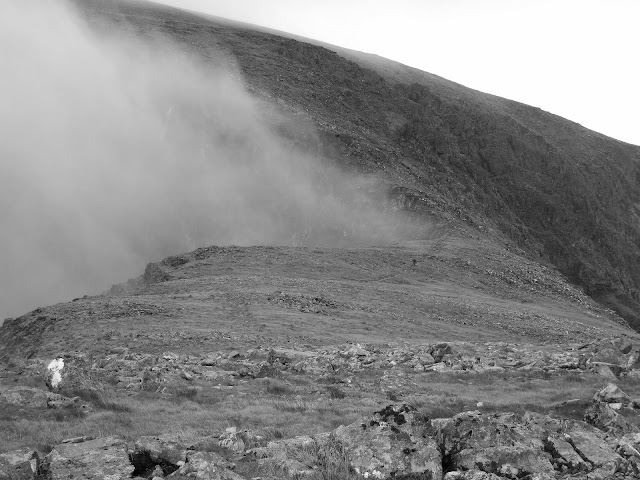 A brief clambery start to the ascent of Aonach Beag, by which time it was seriously wet and verging on wintry, and then a brisk 10 minutes or so saw us to our second summit. 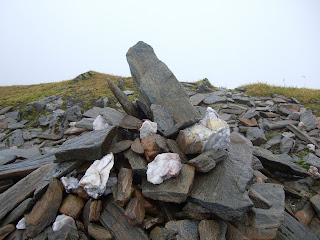 It really is a relatively effortless way to get up these two hills, even taking into account the reascent when you're retracing your steps. And if you make it back to the gondola station by 5pm you get a hurl back doon as well. 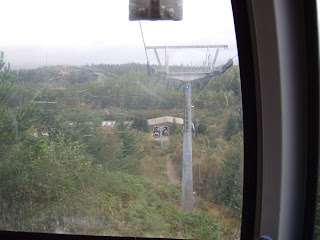 The ideal day's hillwalking for those about to visit the coronary care ward, in truth.
;0)