It largely appears as if nobody has a good word to say about this wee Munro, on account of it not being a full-on mental jaggy mountain of certain death. It also has the nerve to sit quite near the outdoors media-friendly Fannaichs and Torridon behemoths, which must rather rub salt into the wounds.

Cameron McNeish could certainly never be accused of over-selling it as a day oot: "Fionn Bheinn is an uninspiring hill, rising behind Achnasheen, which, since its hotel burnt to the ground, doesn't have a lot going for it either."

In reality, it's a cracking walk for a relatively short winter's day; and if you were to catch the right weather, it affords a fantastic viewpoint towards all its big fancy neighbours. I grant you, it's a bit of a trek from darkest Lanarkshire to the start point, but in fairness we left Bellshill at about half seven on Saturday morning, and were back thirteen hours later. That's a long enough day, but it's nowhere near the mini epics we'll do in the summer. Plus, Andy drove all the way there and back, so the travelling was a piece of cake as far as I'm concerned.
:0)

There are a few ways up the hill, and in good visibility it'll always be pretty apparent where you're headed, but the route we actually followed was the one set out on Walkhighlands.

For ease of reference, I'll repeat it, add any necessary glosses, and stick in a couple of dug photies along the way.
;0)

"1. Park at the car park in the centre of Achnasheen, which has toilets. This area has been landscaped in recent years and is attractive with a small village pond. Head west up the lane back to the main A832 road, turning left and cross road. Almost immediately, by red telephone box, take old road over stone bridge, and turn right through kissing gate (footpath sign) and follow track to water treatment hut. Between the burn and hut, go through kissing gate (footpath sign) and follow burn, keeping to the left of the fence. Go through the gate that gives access to the hill, and continue to follow the stream of the Allt Achadh na Sine up the near bank."

Toilets. They're uncommonly useful things to have right at the start of a walk. Especially after four hours in a car. There's also a wee gazebo-type shelter affair at the car park which means you can sit down in comfort and put your boots on. Luxury. (The pond has seen better days, mind you). Here's the bridge:

The section after the second kissing gate is seriously boggy, even with a fair bit of frost around, and my gaiters were called into action almost immediately. You're better (we established on the way down) to stick closer to the burn side rather than the fence side for this bit. Things do improve a bit once you're past the final gate. Anyway, here's Andy following the instructions:

"2. Ascend the grassy hillside beside the stream for almost two kilometres, where the slope eases. Leave the stream here to avoid heading into a flat boggy area, heading north-northeast towards the shoulder ahead, Creagan na Laogh, which gives a steeper climb. From the flat top of this hillock with its tiny cairn, continue northwards across a shallow descent to climb once more, right up to the ridge of Fionn Bheinn."

The views keep opening up nicely as you get towards the flat bit. To the south west:

That "flat boggy" description is accurate though. Again, we were lucky that there was a bit of snow and frost around that had firmed up the underfoot conditions, and I can imagine this would be unpleasantly squelchy in the summer. The snow was almost solid enough to fill in the gaps between the peat hags and tussocks. It was certainly making life easier for Molly who was skipping effortlessly over the surface...

...but not all members of the party were quite so fortunate:

When you're walking up the slopes of Creagan na Laogh, you get a nice view of Meall a' Chaorainn to the west. There's a bit of a cornice developing there:

The big hills to the north west were really too far away to photograph properly... The views south have opened up even more by now:

It is a fairly steep slog - well, in the snow anyway - up to the top of Creagan na Laogh, but once you're there the bulk of the work is done. These next photies were actually taken on the way back down to there, as it was just about now that the weather closed in, but technically they still count:

The bit of the route description that says you climb up to the ridge of Fionn Bheinn from there rather marked the end of the photo opportunities unfortunately. The weather had been rolling in, and suddenly it stopped rolling and decided to arrive. The ridge is just up there, next to that rocky outcrop though: "3.Turn left along the ridge, which descends slightly before it begins the climb to the summit. The ridge is bounded on the north by the grassy crags of Toll Mor, the most dramatic feature of Fionn Bheinn and unsuspected in views from the road. The ridge curves slightly right to reach the summit trig point. Fionn Bheinn is 934 metres high, which makes it a Munro. There is a great view north to the Fannichs across Loch Fannich (the range to which Fionn Bheinn belongs, geologically), but the best prospect is that of the Torridon mountains from this unfamiliar angle. The quickest descent is to return the same way."

If we'd been there in the summer, we might have got the views, but it wasn't to be. This photie that I've stolen from Munro Magic shows you what you could've won... ...but this is what we were seeing:

On that basis there didn't seem a whole lot of point in hanging around at the summit trig point, albeit Molly - windblown and freezing or not - demanded a pictorial record of her 20th Munro: It took us just under three hours to get up, and about an hour & a quarter to get back to the car. Apart from one brief gallop after a deer lower down the hill, Molly behaved herself, and there was no evidence of actual livestock once we got past the last gate. Those toilets were awful handy for the post walk change of clothes and general ablutions in preparation for the journey home.

Oh, and while Cameron might be right that there's not an awful lot in Achnasheen, it does boast a train station, and the view west from the platform must be one of the more enticing in Scotrail's stable. 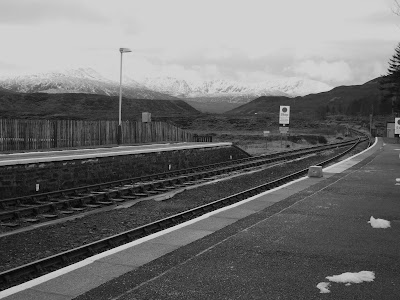 A grand winter jaunt, I say.