If there are any other sensitive souls out there who would no more choose to go across the Aonach Eagach than fly in the air - if that's not an unfortunate expression in the circumstances - then this is the way up the eastern Munro, Meall Dearg.

I'm not sure, but I may well be the first person ever on the internet to openly admit to climbing it by this route, rather than just referring to it obliquely as a possibility. For pussies.

This hill made sense last Saturday for a couple of reasons. The forecast was good, for one, and the prospect of Glencoe in the sunshine is always worth a punt. Also, Andy was otherwise engaged, and given that he'll almost certainly want to do that daft ridge at some point, it made sense to pick off the summit via the jessie route while I could.

A right turn at Glencoe village takes you down the Kinlochleven road. (Incidentally, I liked the cut of the jib of the petrol station owners at Glencoe. They were having a special promotion on jerrycans. All shapes and sizes, piled high on the forecourt.)

There are two bridges just past Caolasnacon campsite/farm, with a couple of small (two car-ish) parking spots just before and after the second bridge. There aren't that many parking options elsewhere on the road, to be honest, so it's definitely best to bag one of those spaces if possible. There may be other fearties oot hillwalking.

A path climbs the left side of a stream that comes down to the roadside. I say a path - as Ralph Storer points out, it begins more like a stream bed, about 20m east of the bridge.There's a slightly more promising path on the right side, but it fades out at a waterfall shortly thereafter.

It's a pretty boggy affair for the first while... 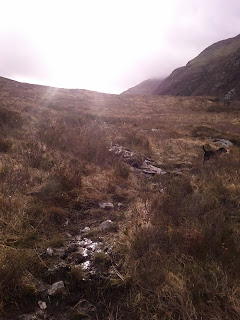 ...but dries out a good bit as the glen widens: 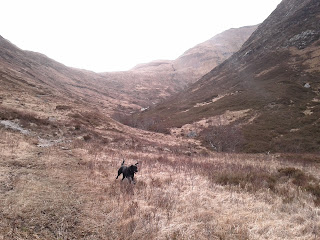 The path then becomes a stretch of stony ATV track, and gives a rather decent section of good flat walking. 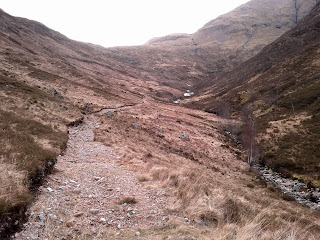 It's certainly flat enough for some gratuitous dog posery: 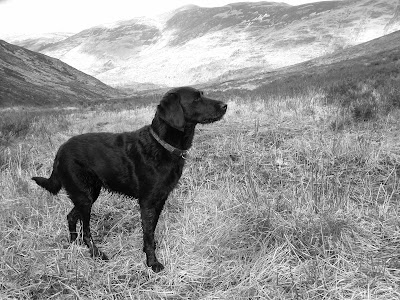 Back to Ralph again: "When the ATV track ends, a path of sorts continues up the glen, gradually veering left towards the bealach at the foot of the North East ridge, and eventually petering out.  When you lose the path, continue the diagonal traverse up the rough, boggy hillside of grass & heather to the complex bealach."

Which petering out etc happens just about here... 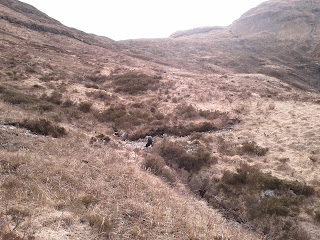 ...the low point, unsurprisingly, being the target. It is undeniably boggy, grassy and heathery from there to the bealach: 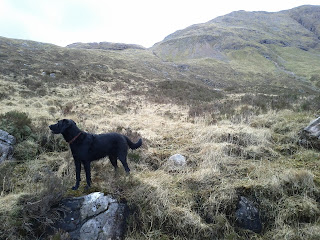 On the plus side though, if you look in the opposite direction you get no' bad views of some irrelevant ridge: 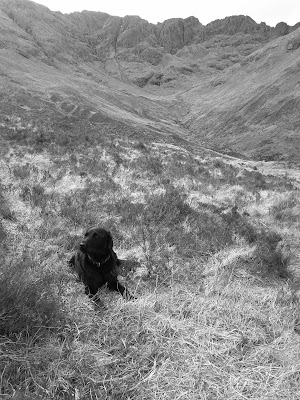 The bealach justifies the "complex" handle. 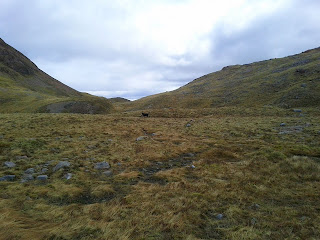 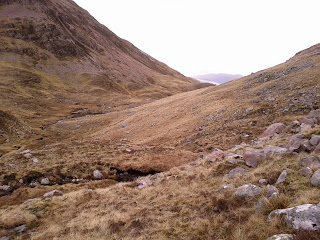 Numerous hidden dips, and folds, and lochany puddles, and bumps, and hummocks, but once you're there, the views grudgingly reveal themselves. 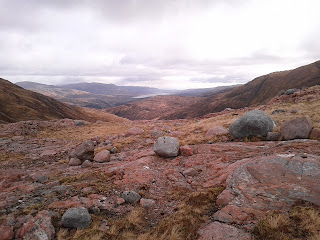 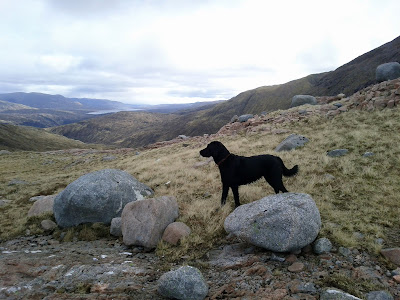 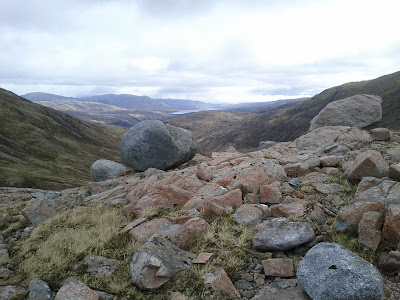 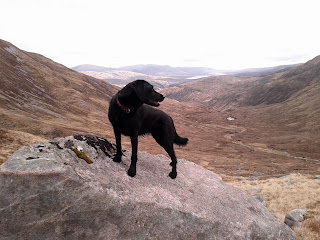 A place to linger - in fact, there's camping spots there or thereabouts, for the determinedly off the wall Munroist.

And from there, it's really just a matter of plodding up the north east ridge. There are some fence posts that are a useful guide for the rough line of ascent, but when the weather's good the route is unmistakeable. It is steep though, and bouldery - not the best underfoot conditions for stability. 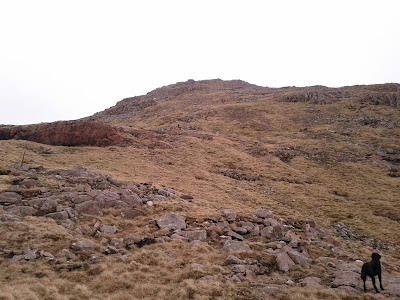 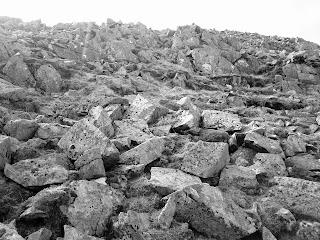 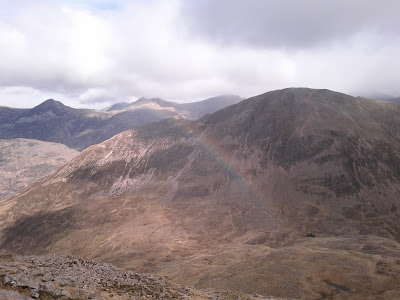 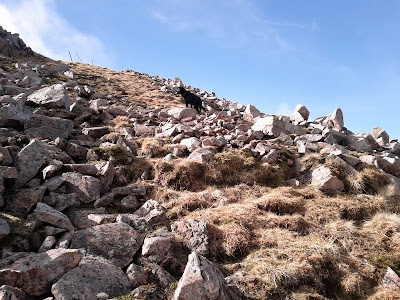 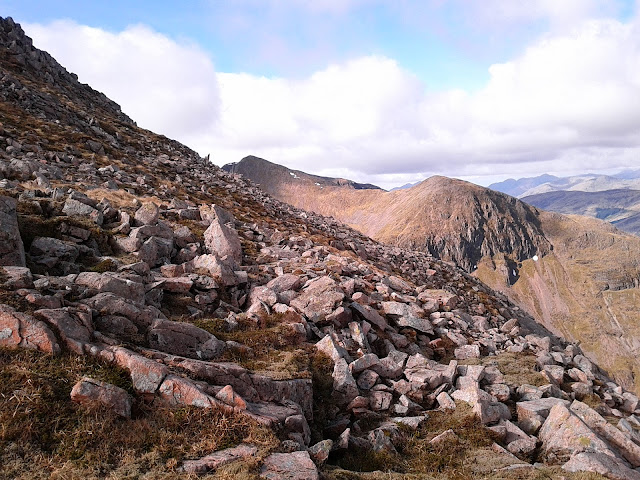 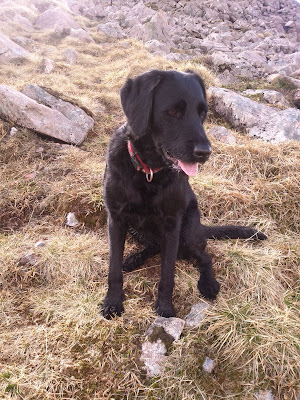 Eventually the boulders give way to a flatter grassier final stretch. Much appreciated by my thigh muscles. 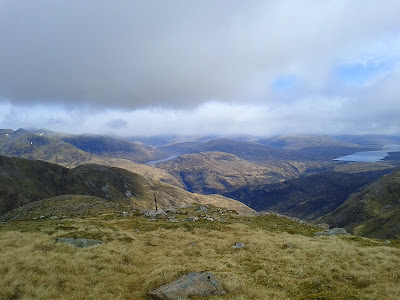 It'd be a bit of a liberty to stick up photies of the ridge, in the circumstances, so I'll confine myself to one of the drop down to Loch Achtriochtan: 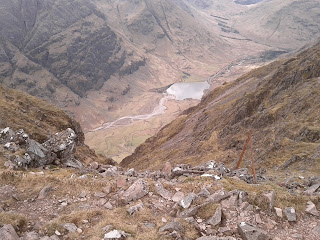 And one of the WBD with Bidean behind her: 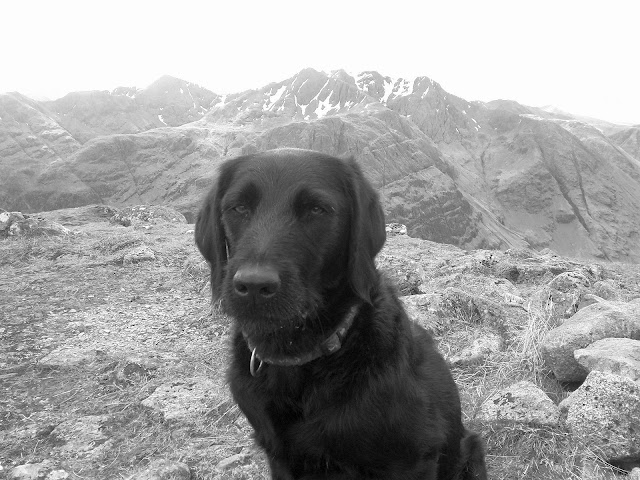 Oh, and one of a big red rock that I found on the way down: 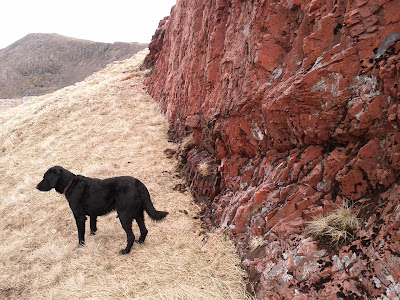 A four and a half hour walk. And no danger of me or the dug flying in the air. That's my type of ridge.