...actually, that's a lie. It seems, accurately, like the bulk of a lifetime ago. Amazing what you find when you're raking about looking for old photies. 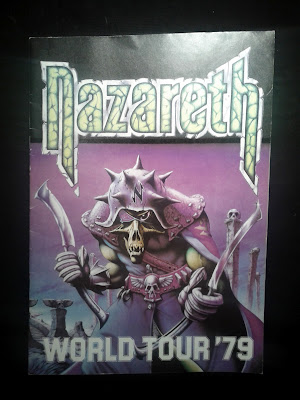 The inside of the programme tells me it was the 20th of January at (of course) the Apollo in Glasgow, and the lineup was Manny Charlton, Dan McCafferty, Pete Agnew, Darrell Sweet and a "newcomer", Zal Cleminson.

As a matter of mild historical interest, Ian Dury & The Blockheads were at Number 1 in what used to be known as the Singles chart with "Hit Me With Your Rhythm Stick".

That maybe sort of fixes it in time a wee bit better. Indeed as the blurb inside the programme says: "Now that the spit, dust and dirt from new wave is settling, Nazareth consider it is time to separate the men from the boys."

You'd almost think they somehow suspected that thirty years or so down the line Johnny Rotten would be advertising butter.