I'm not sure that I've ever read a report about the An Sgarsoch/Carn an Fhidhleir route that didn't promise you wet feet when crossing the Geldie Burn. It was apparent however that Scotland's recent mini heatwave had put paid to that problem, and we were able to cross entirely dryshod with no effort at all.

Geldie Lodge must have been a pleasant enough spot to hang out at when it was in its prime, because it's still worth taking a few minutes to sit doon, eat your sandwich, wander around and so forth. 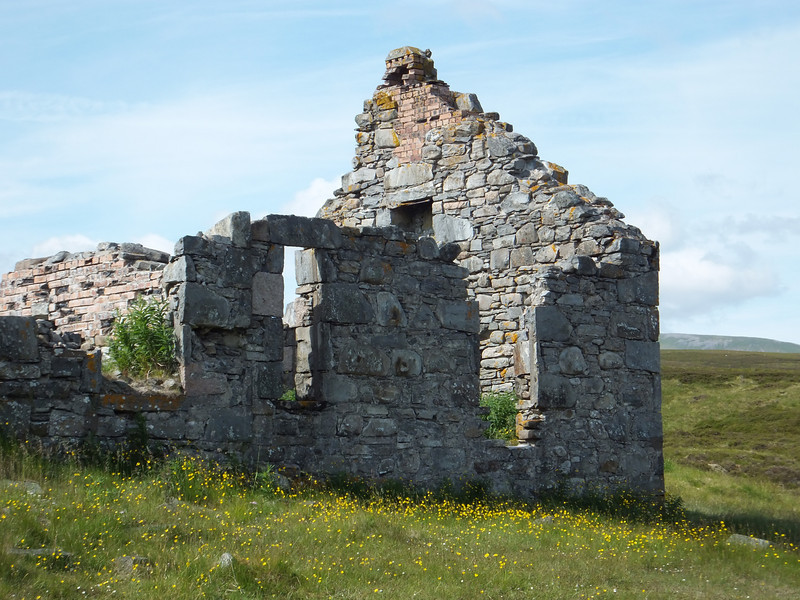 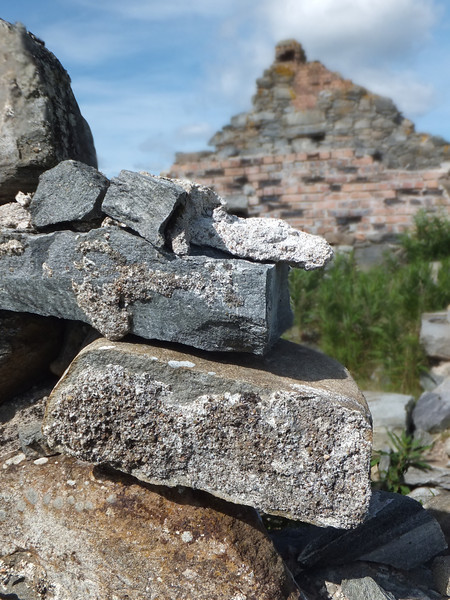 Now, this stretch was deceptive. I was rather hoping we'd have made inroads towards Carn an Fhidhleir within about an hour or so of leaving the Lodge, but in the event it was significantly more than twice that to get to the summit. Again, it's because the target is visible, and there's a decent enough path, so your brain - well, my brain - tricks you into optimism.

Easier said than done. ;) There's no path up this section, so we just chose a meandering route through the clingy heather. It transpired that this harboured more than a few grouse, which cause some consternation to hillwalkers, and excitement to dogs, when they explode outwards & upwards a yard in front of you. However, it's another one of those "gain height quickly" situations.

Anyway, you gain the ridge eventually...

...and "ascend South to summit of Carn an Fhidhleir."

So. About five and a half hours after leaving the car, we'd climbed a relatively wee Munro. It was about now that it began to dawn that there was really no water around to replenish supplies. If we'd been thinking properly, then we could have reloaded at either of the last two burns we'd crossed...but summit fever had clearly taken over our powers of rational thought. That's why there's not much in the way of photos to take you through the next section, which is best decribed in the Walkhighlands version of the route as:

A surprisingly clear path heads SEE along the ridge. It traverses the left flank on the minor bump of point 906m, though this crosses steep grass and it may be easier to continue over the top before heading steeply down to the bealach to the east, a peat mess at 702m. Continue up the far side, through heather at first before more open ground is reached once more. The large summit cairn of An Sgarsoch is a short distance beyond a rocky outcrop. 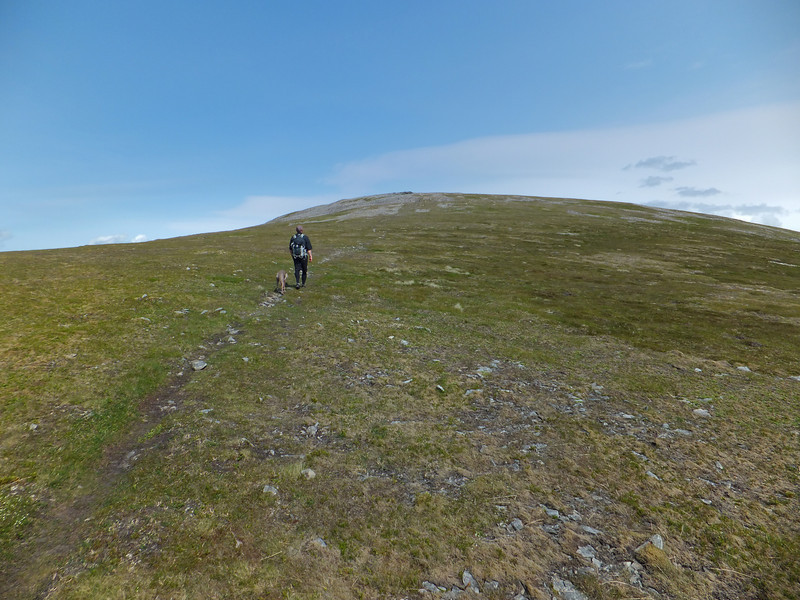 Cameron McNeish says in "The Munros" that "An Sgarsoch was once a market place, where cattle and horses were bought and sold. The event was known as the Feill Sgarsaich. " Unsurprisingly, there's not an awful lot on the top of the hill to bear that out. More surprisingly, there's next to nothing on the internet to bear it out.

Some slightly obscure search terms ultimately unearthed a link to the rather fine Heritage Paths site though, which in turn made reference to a book called Haldane's "The Drove Roads of Scotland", and mentioned one such road which ran from Feshiebridge to Linn of Dee: "Haldane...states that this route was indeed used as a drove road and that local tradition had it, when he was writing in the 1950s, that there was an early cattle Tryst on the summit of An Sgarsoch at the head of Glen Tilt.  If this is true then it must have been a very wind blown cattle market at times.  Haldane suggests that the elevated position would have given the market some defence against surprise attack, implying that it must have been a very early Tryst indeed."

That'll do for me, cowpat evidence or not.

Coos and horses still need the occasional drink, mind you, and to return to the theme of the latter stages of this walk, it probably underlines the ongoing dearth of water that the Munromagic route says that when you  leave the summit of An Sgarsoch you "descend North alongside stream". When a stream is set out as part of navigational directions, you should normally be fairly confident it'll physically exist all year round I suspect, but (predictably by this stage in the day!) of such a stream there was comprehensively nae sign.

There's not an awful lot to add about the return journey, other than it was maybe half an hour or so after we left the top of the second hill that we eventually came across enough of a trickling burn that the dugs at least could get a proper drink. I filled a bottle from a slightly slower-flowing-than-would-normally-be-ideal-source, but suffered no deleterious effects. The water from the stream beside Geldie Lodge was a bit more welcoming altogether. Beyond that, my feet were rather demanding my undivided attention.

We've been meaning to have a go at these two for a while. I'm pleased we managed them, albeit not entirely unscathed, and purists that we are, I'm faintly proud that we did it all on foot. I've decided that's an appropriate trade off for our taking the gondola up the Aonachs yon time. ;)