Further away than it should be. That's largely the feeling I've had both times I've been to Carn Dearg and Sgor Gaibhre. Without looking at the map, prior to our trip there two weeks ago, I kind of recollected that you headed up to Pitlochry and turned left. That, so far as it goes, is accurate enough but the nature of the road to Kinloch Rannoch and thence to the starting point for the walk, just short of Rannoch Station itself, rather means that what I thought was maybe a two hour drive was closer to three.

Still, it was a braw day, we were in no particular hurry, and Jorja hadn't been up a new Munro for months. Sad though it may seem, my immediate hillwalking target is to get the WBD up to 100 ticks. It's going to be a lot easier geographically bagging another 20 for her than it will be to get a new one for myself.

I therefore present to you an edited version of the somewhat dry - if specific - Munro Magic route description accompanied by a variety of photies illustrating a grand day out altogether. 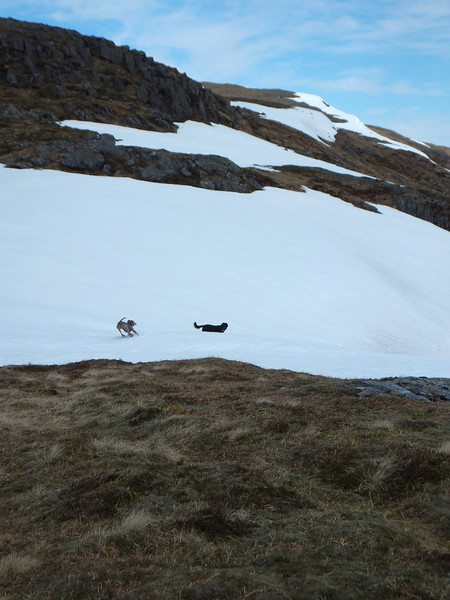 It's a while ago since Carn Dearg summit was mentioned, eh? ...and then disregard the rest of the instructions. They're probably accurate, in fairness, but what most of them seem to want to do is to take you to what is most assuredly the "right path"; but which has also been comprehensively - almost impassably at some points - churned up by one of those wee lightweight digger jobs...

Quite why it's ventured so far up the glen is a mystery, but until you eventually - oh, so eventually - regain the outward path, it's something of a trial.
Still - it barely took the edge aff the day.