As part of his ongoing campaign to avoid having to buy a tent, Andy decided to illustrate his theory that you can drive pretty much wherever you want in Scotland, walk up a hill, and then get home the same day.

So we left at 7am yesterday and headed off to Loch Quoich. It already felt that we'd done a shift by the time we were sitting in the Defender having breakfast at McDonalds in Fort William.

Still, in the blink of an eye(!) we were at the wee parking spot next to the loch and started walking at the very acceptable time of, er, midday. In fairness because we hadn''t made a terribly close study of the map with a view to identifying the starting point, it took us a while to realise that we weren't even on the map until we'd driven a couple of miles further down the lochside. I stress we weren't lost. It was the right single track road. 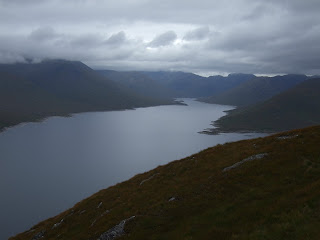 The views along the loch started to open out as we climbed up the stalkers path. The books rave about it as one of the best in the Western Highlands. It's certainly better than climbing straight up the hillside, but I wouldn't have thought it particularly remarkable. Unless everything else around here is rubbish, of course. We only had two dugs today, Skye & Maura, because they're better behaved than my pair, and we thought it wise not to take any canine companions that'd cretae havoc on a deer estate in the middle of the stalking season. As it turned out we saw no stalkers and very few deer.

Upwards progress generally was awful slow. Maybe five hours in a Landrover isny an ideal warmup for hillwalking. Any excuse to stop for a minute was adopted. Oh look - a bridge! 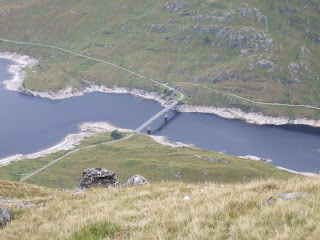 It took us about two & a half hours to get to the top of Gleouraich. That's probably not too bad, because it's not a long way, but it is consistently steep. Met another couple of lads on the top who had also travelled up from Glasgow. They'd had a slight map oversight too - they'd booked into B&B in Onich for the night, thinking from memory that it was just doon the road. Still, it's less far doon the road than Bellshill.

There's a fair amount of height lost getting to the bealach between the hills. You're skirting round the rim of several impressive corries on the way, and there are some interesting drops. This picture is taken peeking over the edge at one point... 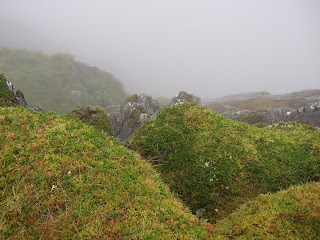 It would take about another 2 hours to get to the summit of Spidean Mialach. The cloud was rolling in all the time. Below is the view back the way. 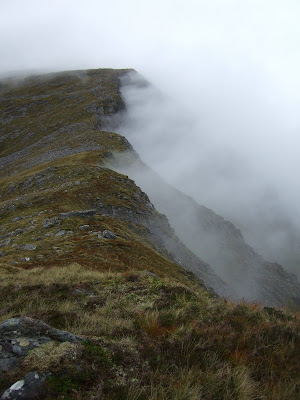 With visibility reduced, when we arrived at an obvious cairn, at a high point, we assumed that was the summit. I'm still in the habit of checking with the GPS though, and it turned out we were a couple of hundred yards and about 60 feet short. The map is actually a wee bit misleading here too, because the hill name sits much closer to the top we stopped on first than the actual marked summit height. If that makes any kind of sense. ;0)

It's a bit of a boggy nightmare on the way down, and it took us a lot longer to find the stalkers path referred to in the books than I'd anticipated. I got another picture of the general cloudy scene boiling up over the loch en route. Gairich is somewhere in the middle of all this! 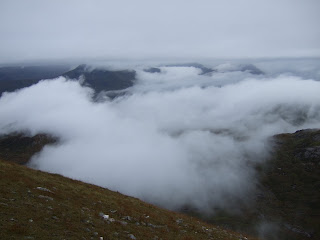 An hour and ten minutes from the summit saw us back to the car. The car journey home was four hours, on the button. We passed a navy helicopter transferring someone to an ambulance at the harbour in Fort William. Whether that was hill-related, or an aftershock from the Camanachd Cup Final, I don't know.

A good day, if a wee bit on the long side. I prefer a night in my Nallo for these marathon hilldays.