What I did yesterday 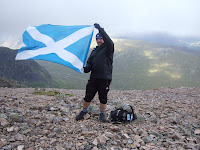 I know that I can edit the date on the post, but this way gives it a more authentic flavour.
The weather on Friday was atrocious all day, and unless it had been drawn to my attention via OM that the MWIS forecast for Saturday was actually pretty good, I'd have been walking naewhere.
Fairly late Friday I texted Andy to see if he was still going to be spending the day involved in the wean's birthday celebrations. He was however up for a quick walk, so we decided that rattling up Stob Dearg on Buachaille Etive Mor might fit in with the weather and the time constraints.

It worked! Two hours up. 1 down. The flag was because Scotland were playing Macedonia in the first World Cup qualifying game. Despite the overwhelming Scottishness of the gesture, it did bugger all good, as they lost 1-0. Rubbish.

I took Jorja, because there were no sheep, and indeed there's no' really anywhere for her to run away to in Coire na Tulaich, and she had a whale of a time. Posing for the camera and everything... 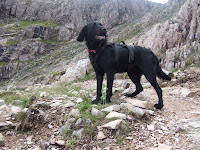