First things first. The house wasn't anywhere near the Old Inn but as that only seemed to be open at the weekends, and their bar was absolutely freezing anyway, we were happy enough that The Myrtlebank Hotel was the one that was 500 yards away. Cracking food, only a fiver for your dinner, and they positively encouraged dugs in the public bar. In a stroke of enormous good fortune, the tables in the bar were thon high up ones that you sit on a tall stool at, so that meant that the other diners food was relatively safe from Jorja's inquisitive nature.

It's the very dab. Highly recommended if you're ever in town, although it's fair to say the public bar is pretty basic. Pool table and juke box though!

I digress. Cairnbank was a lovely house.

Reasonable views from the front window. 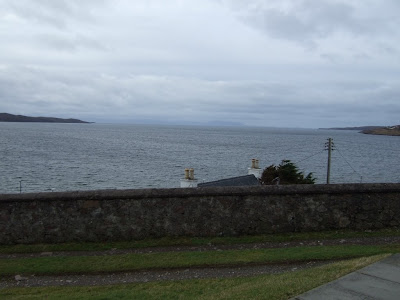 The faint outline in the distance is Skye. Or maybe Raasay, just in front of Skye. It was aye a wee bit too misty to make a positive ID.

We took about four & a half hours to journey up, which was in accordance with the predictions. That included a stop for refreshments in Newtonmore, which has a fine selection of wee sandwich making cafe-type establishments. No' much else, mind you.

I'd stuck the shovel and the towrope in the car in case the snow was impassable, but apart from evidence at the sides of the road on the stretch of the A9 between Aviemore and Inverness that there had been an abundance of snow recently, we hardly saw anymore of the stuff the whole week.

The only low point of the journey was listening to Scotland getting robbed by the referee at the rugby.

A distribution of labour dispute between me & Marion meant that nobody had actually brought the detailed house information we'd printed off t'internet, so we couldny find the place, but thankfully we had the phone number for the nice lady that takes care of the hoose, so she despatched her equally nice husband to come into the centre of Gairloch and guide us up to the door. That was slightly embarrassing. Not as embarrassing as realising when we got in that we were supposed to have brought bedlinen and towels with us.

Thankfully we had the phone number for the nice lady...

Suffice to say that there's a secret stash of bed sheets in the house for idiotic lowlanders, so we were fine.

In, washed, changed and then off to the Inn at Badachro which we had visited last time. It's about 15 minutes drive from Gairloch itself, but well worth the visit. Cracking food, and a friendly house spaniel that's only about a year old. It took a right shine to Jorja, so that meant her attention was divided between fighting off its puppyish advances and trying to steal our dinner, so it worked out pretty well.

The meal was particularly notable for the starter, which was the best black pudding I've ever tasted. It was so good that it actually tasted like food. (I'm not sure that's always true of black pudding, given the ingredients.)

A nice start to the week.