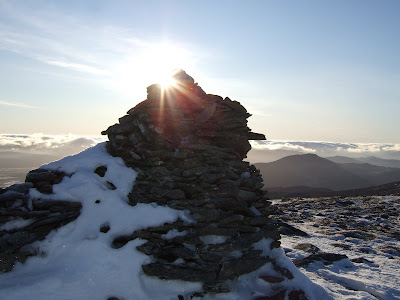 It's about a year since I last walked up into the hills from Shepherd's Bridge behind Newtonmore. There was one Munro out of the group of three that I still had to do, and as it's a relatively brief walk, there had been a few weekends recently when it seemed like a good idea to head that way.

Between one thing and another - mainly a bit of unforeseen time pressure that wasn't caused by limited daylight hours - the original logistics had to be altered rather late in the week.

Suffice to say that my alarm went off at 4:30am on Saturday, and it was a weary trio of me Andy & the Wee Black Dug that arrived at Newtonmore just after 8. Two things worth noting if you're ever in town at that time - the public toilets on the main street are shut; but you can get a bacon roll and a lifesaving takeaway coffee at the transport cafe type place just on the outskirts.

I have to say that the drive up was pretty horrible. The forecast was great, but it was dark, foggy and a wee bit disorienting throughout the journey. I kept thinking daylight would prevail at some point, but you're between fairly sizeable hills on that last stretch of the A9, and it just didny happen. That road isn't any fun at the best of times, and I'd definitely think twice before driving up there again, in the dark, without company. Partly because at some points in the journey I had to check with Andy that we were still on the A9, the fog being that thick.
;0)

As soon as we got to Newtonmore the sun came up, and it was bright - albeit hellish cold - when we left the car park and headed up the glen next to the Allt a Chaorainn. Having been up that way before for the previous trip to A' Chailleach, we were alive to the fact that we'd to keep a weather eye open for the wee track on the left that leads down to the bridge over the burn. That located, it was immediately apparent that the frost and ice was making the going over the formerly uber-boggy ground a lot more pleasurable. I still tend to think that the descent from this hill the last time was one of the wettest I've ever encountered. Over streams, alongside streams and through streams if I recall correctly.

This was a lot better.

Once across the bridge it's just a case of heading north for a half mile or so, and then turning north west-ish. We actually went a bit further along the glen this time, mainly because there was a path marked on the map which ran alongside the wee hut/bothy thing that we remembered from the last time. On the map it might be, on the ground it was nowhere to be seen. 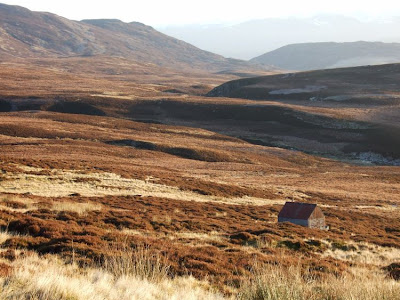 Still, the way to the low point on the plateau was clear enough, and before long the hill itself was in plain view. We were looking forward to getting oot the shade, mind you. 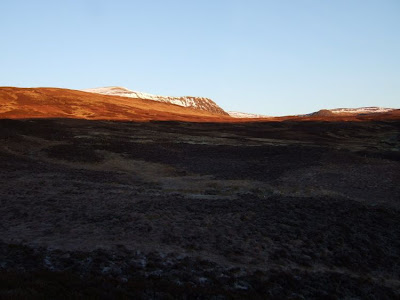 There was a fair bit of snow around, and it was solid in places although rarely very deep. There looked to be an obvious path up, but closer inspection showed that it was just a couple of sets of bootprints. 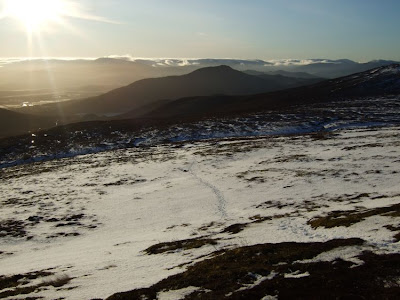 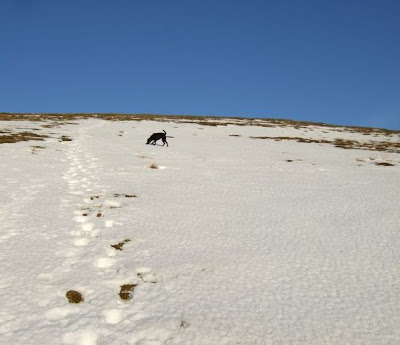 Deceptive. We had the axes & crampons with us, and had it no' been for those footprints, and the occasional gap in the snowcover I reckon we'd have been using the ironwork from that point onwards. The view to Carn Dearg in particular was rather seasonally snowy: 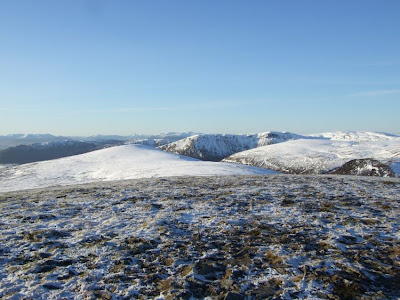 Once onto the plateau, it didn't take all that long to get to the summit, and we stopped briefly for Andy to have a restorative fag break, and me to test the Rab Generator that I got with my birthday money. It works, by the way. I'd still go for my Paramo Torres gilet thing if it was raining, but the Rab smock's the very dab for looking like an Alpinist when there's yon rare Scottish combination of sun and snow about.

It had taken us around two hours twenty to get to the top of the first hill. 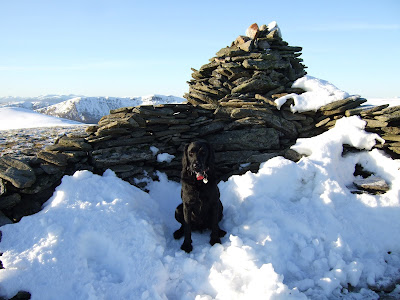 For some unfathomable reason I hadn't bothered to look at the recommended onward route for Carn Sgulain, which was slightly daft given that climbing it was the object of the day's exercise. I seemed to remember that the advice was just to head north, so we did, and came across an interestingly steep, well consolidated snowslope. If we'd waited five minutes at the summit we could have followed the rather well organised chap that set off north west and strolled around the top of the gully we were sliding about in, but hey - he probably regretted no' getting any ice axe practice.

It wasn't much more than 45 minutes between the summits, and there were some nice "long distance" views on all sides. Not enough cloud for any temperature inversions where we were, but there was something of a spooky mist descended on us for around 10 minutes at the top of the hill. It acted as a rather neat natural photographic filter. 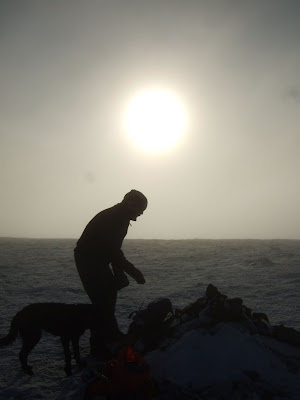 Probably a good thing because there wasn't much else to take a picture of at the summit.

The walk back to the car started well enough - it's a nice spacious place and you had a sense of height because of the lie of the land in front and below you. 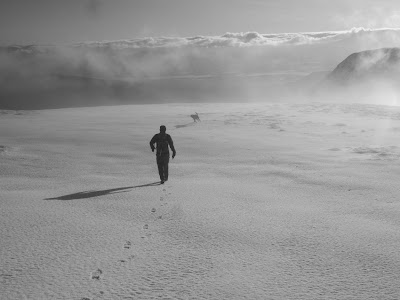 As soon as we were down past the snowline though the terrain changed to wet, boggy, tussocky grass interspersed with craggy outcrops and squelchy half-hidden burns that took a while to negotiate. Just to add a frisson of excitement to proceedings a few random sheep made an appearance. In truth though, Jorja excelled herself as although she started off towards them when she clocked them, she stopped and came back as soon as she was called. Maybe yon Lamington fella knew what he was about after all, eh?

Once back onto the floor of the glen the underfoot conditions deteriorated even further, and to be frank the less said about the walk out, the better. Plus it was a lot longer than I'd expected.

So, apart from the ludicrously early rise, the whole journey up and practically the whole descent, it was a good day.
;0)

And now that I think about it, it was the Wee Black Dug's 25th Munro. In fact, she's been up 26 because she's done A' Chailleach twice. A veteran, that's what she's becoming!