The snow was only falling for about 30 minutes in Glasgow this afternoon. It was heavy, admittedly, but there really couldn't have been much more than about 3 inches of the stuff at the very most. Probably more like 2, in truth.

The disproportionate traffic chaos that it caused was something to behold. Suffice to say that it took me two and a half hours to drive my mother the 10 miles back home to Airdrie. None of the suburban roads had been gritted, and Lanarkshire was an ice rink. The Subaru coped fine (note to self - despite the shameful lack of tread on the front tyres!) but anything that resembled an incline was taking its toll on the, er, 4x2's .

Top snowmoron of the day has to be the chap that decided it would reduce his journey time if he bypassed the line of traffic slithering uphill by driving along the pavement - the 'wrong side of the road' pavement - and then veering back across in front of an oncoming lorry, the driver of which was busy trying not to let it turn into a 10 ton sledge.

Words failed me. Literally, because if they hadn't I'd have been phoning the Polis. Not that they could have got there, of course.
:0/

Still, on a brighter note - the snow makes the decorations ootside the house even more festive-looking! 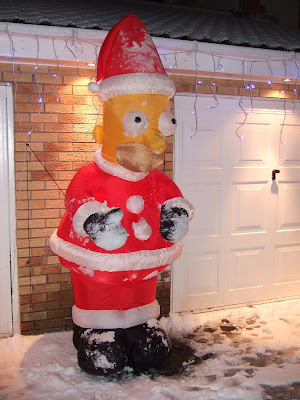