This place could do with a good dust...

It's aye the same when you've been away for a while, eh?

What happened was that the regular failure/inability to get up a hill turned into an inability/lack of motivation to even try to get out at the weekend. I kind of decided to leave the blog alone until I had a new Munro to talk about, little realising that the self imposed ban would last for nearly two months.

In truth, there were a couple of things that took precedence over hillwalking, and used up at least two weekends, namely a stag do in Aberdeen and then a related wedding in Glasgow. So raise your glasses to Paul and Fiona Finnie. 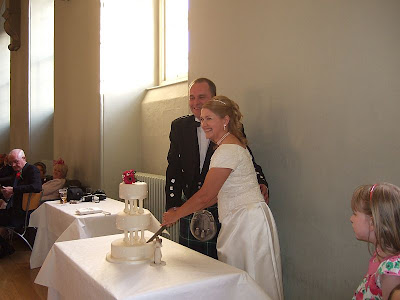 Ah, they got a lovely day for it. It's nice when you can stand outside for a fag in the sunshine at your own wedding.
:0D Pity the proposed honeymoon trip to St Lucia coincided with the Icelandic volano, admittedly, but there seems to be a chance they'll get to go next month.

Anyway - that's the hard part done. The first post after a return from exile. I'll stick some photies up depicting my triumphant return to Munrobagging with a conquest of Geal Charn shortly - although the pictures aren't as good as the ones from the two previous failed attempts. Still, the place looks a wee bit different. There's paths, for one thing.