There's not an awful lot to say. The first possibility of me climbing this hill was the day me, Gordy & Andy did Creag Pitridh, but that was after a longish hillwalking layoff, so it was a Munro too far. A few weeks later I had a go again, but the snow was too much for me.

The weeks flew past, and I confess the failure rate was getting to me, resulting in a reluctance to waste a Saturday toiling through snowdrifts to no particular effect. So hills took a back seat. Alcohol, as usual, promptly regained the front seat. :0/

However, my beloved astutely realised that for the sake of my mental health and her expiring patience, getting up a Munro would be A Good Thing, so I managed to get myself together and head back to, er, Monarch of the Glen Country.

Just me and the Wee Black Dug. The snow has disappeared to a sufficient extent, however, to mean that Molly might be in with a chance of resuming her hillwallking career in the near future too.

It's a great place Ardverikie. Clear paths, obvious routes and no falling through snowdrifts up to your oxters. There's still a bit of the white stuff about higher up, but it was soft and no' that deep so although I had my ice axe & crampons with me, I wasn't close to needing them. I suspect that's the last I'll take them for a few months.

If you compare these pictures to those in the accounts of the last two visits you'll realise (a) the snow has indeed almost disappeared and (b) the light was better on both the previous trips.
;0) 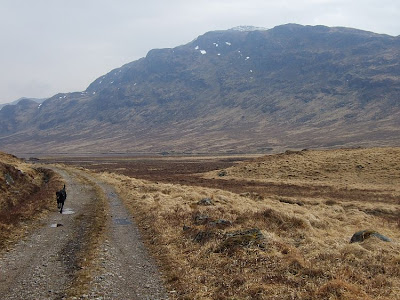 Same bit from the bridge: 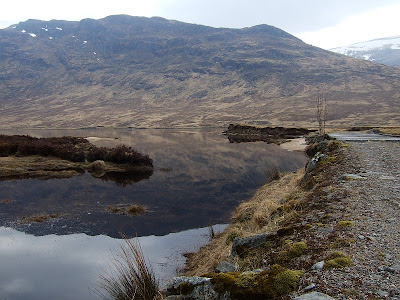 The snow has all but disappeared lower down. You'd need to be fairly distracted to fall through this snowbridge into the burn: 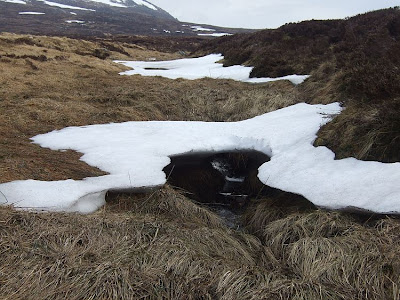 The paths are exactly where they should be, according to the OS map, so it's a fairly straightforward climb up Geal Charn and doesn't seem to take long until you're actually looking down on Creag Pitridh. I think it took me about two hours longer to get to roughly this point last time out. In fact, I suspect I was about 5oo' lower down than this, on reflection. 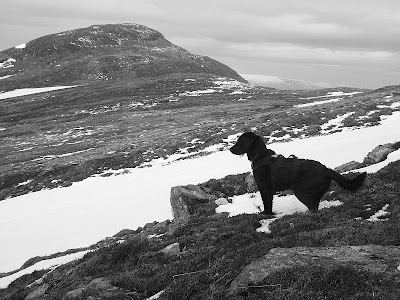 A couple of false summits, and then the surprisingly (for some reason it surprised me) pointy top hoves into view: 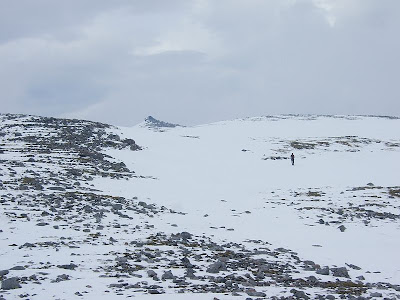 So the Wee Black Dug sets off at a rate of knots, in search of sandwiches: 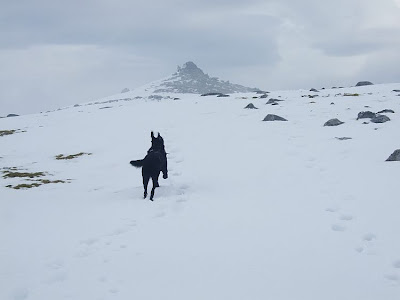 I was pleasantly surprised that I only had one wee twinge of cramp all day, just as I got to the top. I'd been expecting worse.

Trig point, summit cairn and Creag Pitridh below on the right: 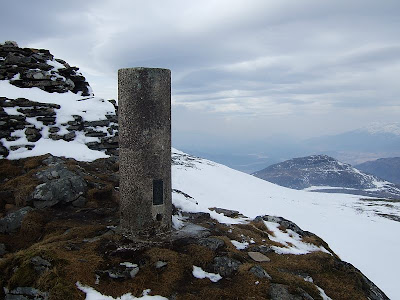 I came across a new Munro bagging hazard here, I have to confess. The wind had got up a fair bit on the summit plateau, so I had moved to the sheleterd side of the cairn as you do. I leaned gently on one of the rocks, as I was sitting down and it came loose and fell to the ground, a distance of about a metre. Given that it was about the size of a pillow it would have done some damage if it had actually landed on my foot rather than two inches to the left of it. Be careful out there, people!

It was nice to be able to retrace my steps through the snow and then pick the easiest option back down to the bealach between Pitridh and Geal Charn. Picked up the path again, and then a fairly leisurely stroll down to the bridge at Lochan nan Earba. The Wee Black Dug couldn't resist the temptation. 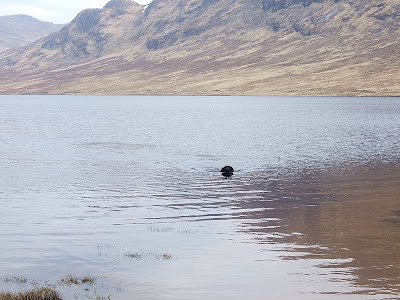 Although you can't really blame her - it's a fantastic spot. 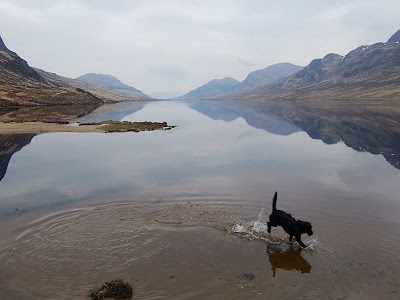 She, and I, had had a good day. We were both happy. She probably looked happier than me though... 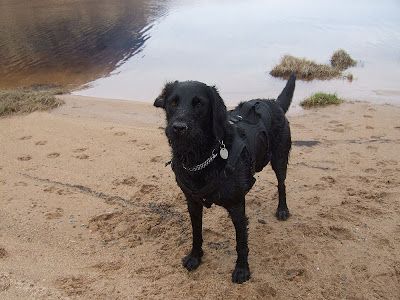