The Peak of the Corrie of the Scotsman 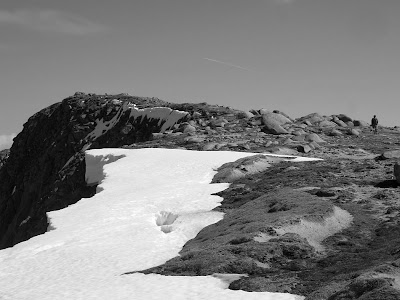 If we'd gone by the MWIS forecast for yesterday, I doubt we'd have been anywhere near Glen Etive. 45mph gusts, blizzards, awkward mobility - the usual encouragement for potential hillwalkers. Something had been lost in the translation though, as the sun was splitting the trees here on Friday evening, the weather had yon "set fair" look about it, and there didn't seem to be anything like the same air of pessimism from the non mountain-specific forecasts.

So, it was with a fair degree of hope that me, Andy & Skye the dug set out, having arranged to meet Gordy at Doune on the way.

This was the second attempt at Stob Coir an Albannaich, poor route finding ability and large hangovers having stopped me and the Boy Hope a year or so back, the day after a successful assault on Glas Bheinn Mhor and an even more successful night in the Clachaig. There is, mind you, no entirely obvious way up this hill. The comments on munromagic, rather than the route itself helped on this occasion, and just in case anyone's interested I thought a sort of route description might be worthwhile, as opposed to just sticking up the photies.

In principle, it's straightforward. The way up follows the left side of the large gully, which is obvious even from the car as you drive to the parking spot, which is opposite - or at a suitable spot beyond - the road that leads down to Coileitir itself. Cross the bridge and then turn left at the first fork. There's a deer-fenced enclosure facing you, so follow the path taking you left for about fifty yards till you reach a large (tied-shut) gate, and climb over it. Or carefully untie it if you have a dug, not forgetting to secure it with a proper outdoorsy knot thereafter! Andy managed to squeeze Skye under the fence where the burn passes under it, so that's another option for uber-skinny dugs.
;0) 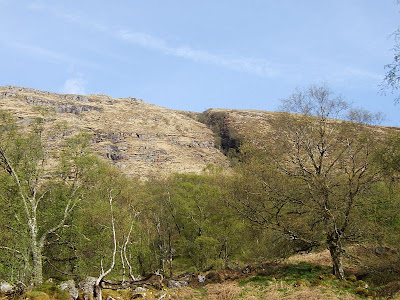 There's not much of a path through the enclosed section, which is a tussocky, young tree-filled, return to the natural order of things sort of a place, but what you're aiming to do is get uphill to the top right hand corner of the enclosure, where there's a handy gap to get through and onto the start of the hill proper.

I have to say that the terrain next to that gully looks seriously - unenjoyably - steep as you approach it, but on the positive side it isn't actually overhanging(!). You certainly gain height quickly - or rather you would gain height relatively quickly if you were able to walk up it without stopping for breath every fifty feet like us, let's put it that way. 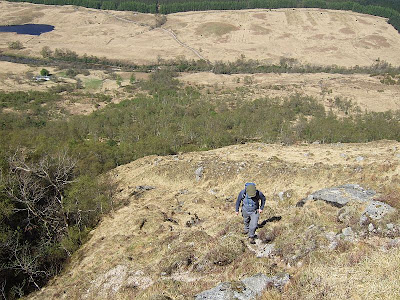 Still, there's nice views back to the car, and over to Beinn Trilleachan and Beinn Fhionnlaidh.

Starav also keeks over from the right. It's a proper big lump of a hill. I got a picture of it with Ben Cruachan in the distance, and the overall shape of the hills struck me as quite similar. 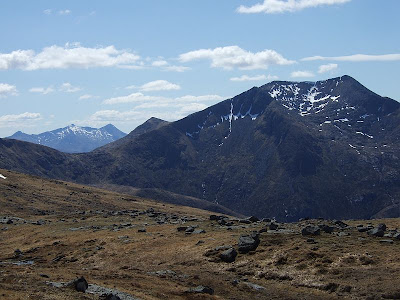 Once you reach the top of the gully - and there's a couple of nice picnic spots with wee waterfalls on the way... 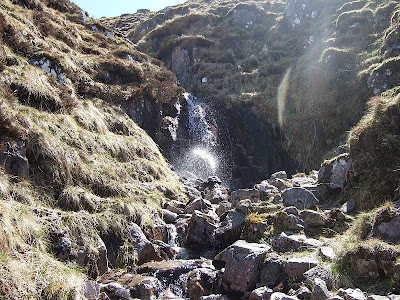 ...and a Scots pine that seems to be growing out of thin air... 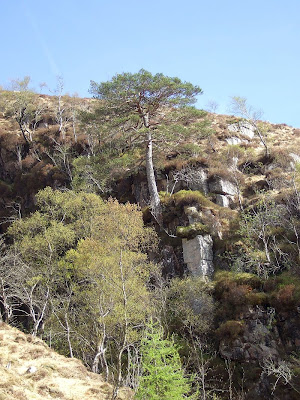 ...things flatten out a bit and the terrain gets rocky. 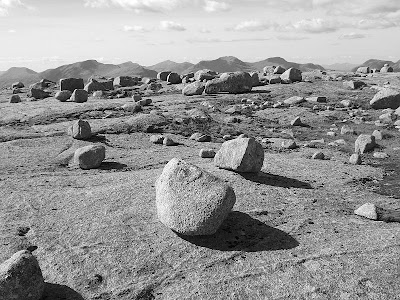 This doesn't last long, and you're soon walking across a relatively flat grassy plateau, wondering why, even though the visibility is glorious, you can't work out among the three of you whether the rocky top to the left is Beinn Chaorach, or whether the curved promontory up ahead: 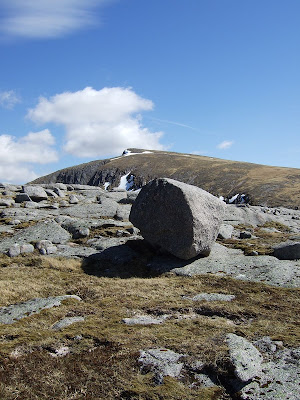 ...is Beinn Chaorach, or is that Albannaich itself, or...or...ah. It sort of falls into place when you see the size of the corrie that leads to the summit, complete with cornice and everything. 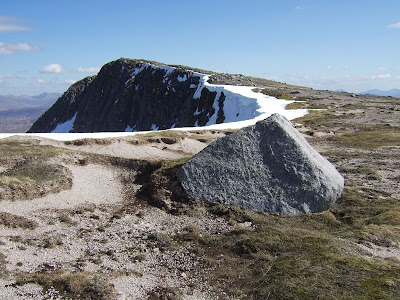 By this stage a rather nice vista backwards has has opened up. (Bidean nam Bian with the smattering of snow to the right of centre. Ben Nevis on the far right in the distance) 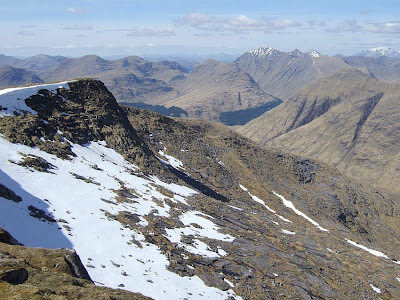 And this is the view down Coire Glas, just past the top of Beinn Chaorach looking down to Glen Ceitlinn and beyond to what I think is the big Bookle. 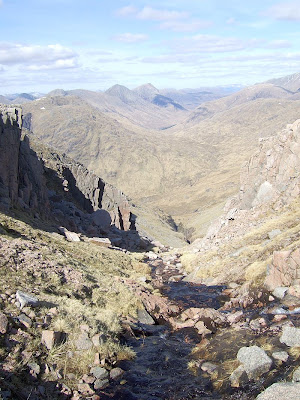 It took us (whisper it) more than four hours to get to the summit. Given that it was by then 3:45, and one member of our bold expeditionary force (who shall remain nameless) was supposed to be at an 18th birthday party in Airdrie for 4:00, we kind of decided that heading on to do Meall nan Eun wasn't really on the cards.
;0)

It probably underlines how steep the hill is, and how direct the route, that we were back at the car less than two hours after leaving the summit.

My legs are protesting today, all that being said. Maybe three hillwalks in three weeks is a wee bit too much for me. It's still preferable to no hillwalks in three months, of course. And that one yesterday brings the total of different Munros I've done to 142. Which means that I've done half of them. Technically of course; given my head for heights I've done a lot more than half of the Munros I'm ever going to do.
;0)